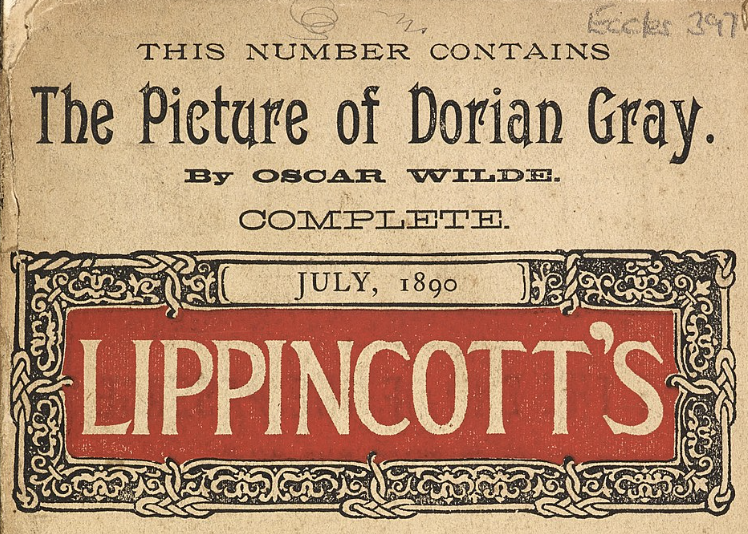 The cover of the 1890 publication of The Picture of Dorian Gray in Lippincott’s Magazine. Wikipedia Commons.

The Picture of Dorian Gray by Oscar Wilde is a perfect example of where art and literature intertwine. The novel is based around the story of an artist who paints a portrait of a young muse, Dorian Gray. Dorian wishes that his portrait would age in order for him to stay eternally youthful.

Dorian Gray and the Storyline

The Picture of Dorian Gray is set in Victorian London and is an example of late-Victorian Gothic fiction. The protagonist of the novel is introduced to us as the latest sitter for a portrait by artist Basil Hallward. Dorian Gray is a rich, youthful, and handsome young man whose beauty astonishes Basil. However, Basil’s friend Lord Henry Wotton says that he has revealed too much of the sitter in the portrait.

Lord Henry is a shallow friend of Basil, whose life revolves around hedonism, youth, beauty, and pleasure. Basil is worried about the effect that Lord Henry will have on Dorian. When they meet, Lord Henry upsets Dorian by discussing the changing effect of youth. “When your youth goes, your beauty will go with it, and then you will suddenly discover that there are no triumphs left for you.”

Dorian is convinced by Lord Henry, agreeing that “youth is the only thing worth having.” As a result, Dorian casts a curse on the painted portrait. He wishes that the painting will bear the burden of age and that he will stay young forever. Throughout the book, Lord Henry’s influence on Dorian grows stronger and he pursues a life of sin and corruption. He commits various crimes and even kills a number of people with little remorse.

The whole plot line and the written language of the novel is a work of art in itself. As Dorian’s reputation has suffered, the painting has taken a physical resemblance of his life of sin. The portrait is now hideous and Dorian kills Basil in a rage of fury. Dorian never confesses to this crime, along with many others, and resorts to destroying the withered portrait. With the same knife that he killed Basil with, he attempts to destroy the painting.

This dramatic ending of The Picture of Dorian Gray is described by Oscar Wilde perfectly. A crash is heard and servants rush immediately to the room. To the reader’s surprise, the portrait is not damaged at all and shows Dorian as a beautiful and youthful man. On the floor, Dorian lies dead, hardly recognizable as he is now a wrinkled old man.

The Painting and the Painter in Dorian Gray

The portrait is central to the storyline and is where art and literature truly meet. We read the description of the painting and try to conjure an image in our imagination of what it truly looked like. At first, the portrait is described by Lord Henry as Basil’s “best work.” By chapter 14 , it is described as the “hideous face on the canvas.”

The portrait physically changes in accordance with Dorian’s altering personality. And yet, by the end, we learn that it is Dorian who has aged dreadfully, and that the portrait remains as youthful and beautiful as before. The portrait becomes a true mirror of the protagonist.

Basil Hallward as an artist is talented and uses portraiture as a form of expression. But how he paints Dorian in this new portrait is innovative. Before this portrait, the novel describes how Basil would paint Dorian as a figure from mythology, or an ancient soldier. He now paints Dorian as he actually is.

In the first line of the preface, Oscar Wilde writes that “The artist is the creator of beautiful things. To reveal art and conceal the artist is art’s aim.” This seems to forebode the fate of both the painting and Dorian Gray, when Basil Hallward paints exactly what he sees instead.

Parallels have been made between the fate of Dorian Gray in the novel and the real life of the author Oscar Wilde. An Irish poet and playwright, Wilde saw much success but provoked outrage in Victorian England for an eccentric lifestyle that went against the norm.

By the 1890s, Wilde was a popular playwright and figure in Aestheticism – a movement in art and literature that believed art should focus on beauty rather than conveying a message. For example, art for art’s sake and the concept that something could just be beautiful with no specific purpose.

In 1895, five years after The Picture of Dorian Gray was first published in Lippincott’s Magazine, Wilde was put on trial for gross indecency. Wilde displayed homosexuality, a chargeable offence at this time in England, and was charged after the details of his affair with Lord Alfred Douglas were made public. The affair had begun in 1891, and occurred whilst Wilde was married with two sons.

Although Wilde pleaded not guilty, he was taken to prison in 1895 to serve two years of hard labor. Throughout the trial, Wilde was questioned about the affair, which Douglas had described as a “love that dare not speak its name.” People began to make parallels between the immorality displayed by Dorian in the novel and the accusations being made against Wilde in real life. Oscar Wilde passed away in 1900, aged just 46.

Both vanity and aesthetics are two themes that run throughout the whole novel, and these themes have strong links to art. Dorian’s obsession with his own image makes strong parallels to the story of Narcissus, who fell in love with his own reflection. This is famously captured in a painting by Caravaggio in the 16th century. Another similar Caravaggio painting featured in our Masterpiece Story special.

As aforementioned, Wilde was a figure in the Aestheticism movement. Aesthetics and the purpose of art are topics that feature within the storyline. The idea that art has no purpose is summarized by quotes like “all art is quite useless,” whilst “beauty is the wonder of wonders.”

The focus on appearances and how these can change conveys the theme of vanity. At one point, Wilde writes of Dorian that “the sense of his own beauty came on him like a revelation.” Ultimately, it is the realization of his own beauty and his longing to stay youthful forever that seals his fate. Dorian sees the effect of his mistakes on his once-perfect portrait, unaware that he is looking at a reflection of his withered appearance.

Oscar Wilde’s famous novel, The Picture of Dorian Gray, is a fantastic example of where art and literature cross paths. The novel is a work of art in itself and almost every sentence forms an epigram that is worth quoting.