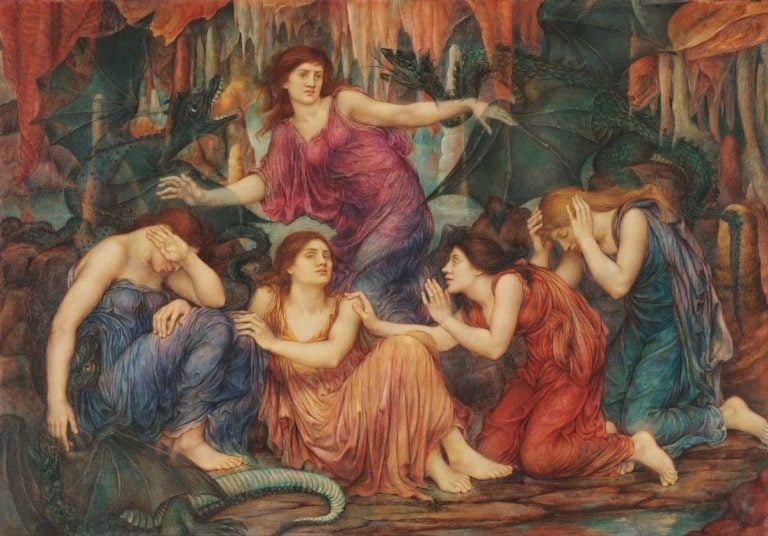 Welcome to the work of Evelyn De Morgan. Jewel rich colors, gorgeously draped figures and a feminist message – what’s not to like? But why is her name so unknown?

Art history scholars regularly pay homage to the Pre-Raphaelite Brotherhood. Opinion is often divided though on this “boys club” group of artists. They did re-write how women were portrayed in art, showing them as powerful, sensual, sexual beings. Although sadly, often in stories that ended badly. The ranks of the brotherhood were mostly closed to women as artists. You might be a wife, a mistress, a muse, a model, but you were a symbol, not a creator. Nevertheless, a small number of women connected to this movement did carve out a place for themselves. They made art that is both skilled and utterly beautiful. For instance, Elizabeth Siddal, Marianne Stokes, Joanna Mary Wells and Emma Sandys.

Evelyn De Morgan was born Mary Evelyn Pickering in 1855. De Morgan’s mother educated her at home, as she felt her daughter should have the advantage of learning, just as much as her sons.

Drawing lessons began at age 15 and from that point she knew art was her calling in life. On her 17th birthday she wrote:

Art is eternal, but life is short… I have not a moment to lose.

Her mother suggested that she be “presented” to society, which was the protocol for nice, young, upper-class women at the time. Evelyn replied “No-one shall drag me out with a halter round my neck to sell me!”

She was one of the first women admitted to the Slade School of Art in London in 1873, and quickly developed her own style. At this point she began to use her middle name, Evelyn, which was then a name used by both men and women. Throughout her life she would fight to be judged on her skill, not her gender. Her first work sold was Tobias and the Angel in 1875, and a year later she exhibited St Catherine of Alexandria at the Dudley Gallery in London.

De Morgan would prepare loose compositional drawings, often nude, then build on the figure with clothing and detail. She worked in oil on double lined canvas. She experimented with oils suspended in glycerin, which wasn’t entirely successful. Her use of colored oils painted over gold leaf was astonishing though. She borrowed this process from the medieval alter pieces she saw on her travels. She did very little re-working or over-painting.

Her influences include the Symbolist painter and sculptor, George Frederic Watts. She would visit him in Florence to immerse herself in the Renaissance painters. Friendships with Dante Gabriel Rossetti and William Holman Hunt brought her into the Pre-Raphaelite circle.

She married the ceramicist, painter, and novelist William De Morgan in 1887. She later used profits from her art to support his pottery work. De Morgan’s mother, Sophia, was a campaigner for social reform. They clearly both shared their progressive views. Evelyn De Morgan also had excellent politics, she was a feminist and a pacifist. She supported the suffrage movement. Her signature is even on the Declaration in Favor of Women’s Suffrage of 1889. She painted many images protesting the First World War and the Boer War, using demons to represent war. She then sold to raise funds for the Red Cross.

Evelyn De Morgan died in 1919, leaving a collection of richly colored canvases, and having defied the expectations of her gender. Her message of feminism, the rejection of war, and also the value of spirituality over materialism is as relevant today as it was over one hundred years ago.

De Morgan’s sister, Wilhelmina Stirling, gathered works into a collection that eventually became The De Morgan Foundation. They lovingly care for the works of Evelyn De Morgan to this day. You can see more of her works here.