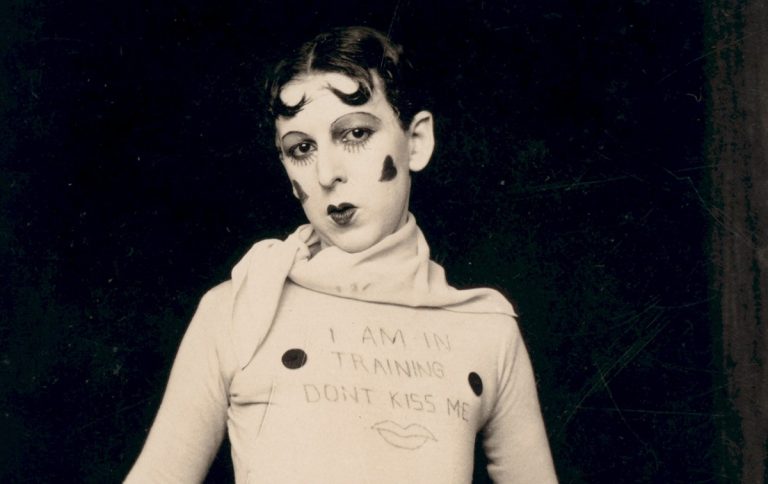 Claude Cahun famously said “Masculine? Feminine? It depends on the situation. Neuter is the only gender that always suits me.” Photographer, writer, and political activist, Claude Cahun was born in 1894 in Nantes, France into an intellectual Jewish family. Named at birth as Lucy Renee Mathilde Schwob, they later adopted the unisex name Claude Cahun.

At 15 years old Cahun met Marcel Moore (born Suzanne Alberte Malherbe) and they became lifelong companions. The romantic and creative collaboration lasted a lifetime. In fact, Moore’s widowed mother married Cahun’s divorced father in 1917, so they were step-siblings, as well as lovers.

After attending Sorbonne University, the couple settled in Paris. Cahun started making staged self-portraits at just 18 years old, and this continued for many years. The portraits feature the artist looking directly out at the viewer, wearing costumes and make-up, swapping and mixing genders. The couple held literary and artistic “salons” in their Parisian home, and visitors included André Breton and Sylvia Beach. Man Ray was one of their most famous collaborators. Breton called Cahun “one of the most curious spirits of our time.”

Cahun’s work is clearly a very early predecessor of the self-portraits of Cindy Sherman. Before she became a Turner prize winner, Gillian Wearing discovered Cahun’s photography. The use of masks, personas, and fluid identities fascinated Wearing, and in 2017 she staged a show at the National Portrait Gallery using her own work alongside the work of Cahun.

Although photography was clearly a much-loved artistic outlet, Claude Cahun was also a writer, a journalist, an essayist, a poet, and a sculptor. They worked in theatre and participated in several Surrealist exhibitions in London and Paris. Perhaps their most famous literary work was Disavowels, published in 1930. However, Heroines published earlier in 1925, has the unique setting of female fairy tale characters mixed with modern-day women.

Both Cahun and Moore were politically active. As part of the Resistance, they wrote and distributed anti-Nazi literature. In 1937, following the fall of France, and the rise of anti-Semitism, they moved to the island of Jersey, just off the coast of France. Reverting to their original names, Lucy Schwob and Suzanne Malherbe, they declared themselves sisters and continued their political efforts from Jersey.

However, Jersey was invaded by Germany in 1940, and the two were in pressing danger. Their distribution of anti-Nazi material was certainly political, and they were both vehemently anti-fascist. But in some ways, their protest was also an art installation. They would throw crumpled leaflets into passing vehicles, hide them in cigarette boxes, and even slip them into soldiers’ pockets!

But their efforts were brutally punished when four years later, in 1944, both Moore and Cahun were arrested and sentenced to death. They were imprisoned, their home was seized, and much of their art was destroyed.

Jersey was liberated by the Allies in 1945, and the two were saved, but unfortunately, Cahun’s health had deteriorated badly in prison. Cahun died soon after. Devastated Moore moved into a small house in Jersey, living alone until committing suicide in 1972. The two are buried together in St Brelade’s church in Jersey.

But this is not the end of the story. In the 1990s there was a sudden upsurge of interest in Cahun and Moore. Those amazing and carefully staged self-portraits in which they assumed different personas, achieved cultish status. Artists confounding binary stereotypes of male/female totally caught the zeitgeist of gender politics.

Cahun offers our own age a foretaste of queer negotiations with the gender binary.

In 1994 the Institute of Contemporary Arts, London, held an exhibition of Cahun’s self-portraits. And in 2007 David Bowie created a multi-media exhibition of Cahun’s work at the Highline Festival in New York. One image, in particular, I am in training, don’t kiss me, became one of the most loved and copied images of queer iconography of the 20th century. In 2018, Dior released a fashion collection inspired by Cahun.

My role was to embody my own revolt and to accept, at the proper moment, my destiny, whatever it may be.

They may have been quite unconcerned by the way that they are now adored by art historians, and members of the gay, lesbian, transgender, bisexual, queer, and gender-questioning communities. Their art was their weapon, not their route to stardom. In that sense, they are just as revolutionary now as they were 100 years ago.