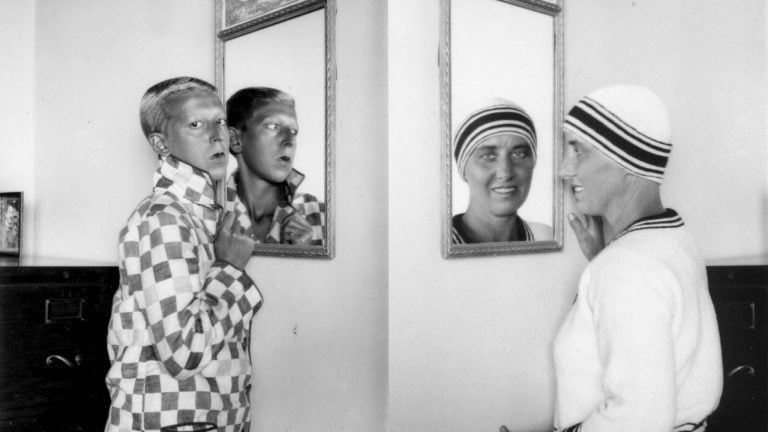 If I asked for your top 10 political artists, does Claude Cahun spring to mind? Marcel Moore? No, I guessed as much. But these two art activists had an audacious life story (and love story) that will leave you breathless. It was described in a book Paper Bullets by Jeffrey H Jackson.

Cahun and Moore went from avant-garde Parisienne salons to a Nazi jail in Jersey, creating subversive artworks and celebrating their gender-bending sexuality along the way. Their romantic and creative collaboration lasted a lifetime.

The art-world glitterati have explored the writings and photography of Claude Cahun and Marcel Moore, and we are fans here at DailyArt Magazine, but now we have a major new research project to recommend to you – Paper Bullets by Jeffrey H Jackson.

Paper Bullets is the first book to fully explore the war-time resistance activities of Cahun and Moore, giving extensive details of their Jersey years. In the book, we slip inside the lives of the two artists, Claude Cahun, born Lucy Schwob and Marcel Moore, born Suzanne Malherbe. Born in France, the two were step-siblings and lovers, experimenting with art, literature and photography in vibrant 1920s Paris.

A key part of their work was the questioning of sexual identity and gender identity. We may feel as if discussions around queer culture and gender fluidity are a very modern concern, but in fact, Cahun and Moore were exploring this many years before. In the book, Jeffrey H Jackson chooses to assign the two artists feminine pronouns (she/her) although both artists felt they had left such binary identifiers behind. Jackson also identifies them as “lesbians”, whereas Cahun and Moore seemed to feel that such definitions were a strait-jacket they wished to cut away. As Cahun said in their own words:

Neuter is the only gender that always suits me.

The issue of pronouns was always going to be a tough path for Jackson to negotiate. And it is true that in Jersey, Cahun and Moore were mindful that the small island was much more conservative than Paris, so had consciously reverted to their original birth names (Lucy and Suzanne) and emphasized their sibling bond rather than living openly as lovers. Most people in the art world, however, know the two as Cahun and Moore and will often use the accepted gender-neutral pronoun “they”, it is also the rule this article follows. The singular “they” seems to incite ire and criticism from many quarters, although it is much more common now and in fact has been in use in the English language since the 14th century!

Paper Bullets reads like a well-paced, nail-biting thriller. Jeffrey H Jackson leads us through a novel-like tale of intrigue, scandal and plucky war-time resistance. Cahun and Moore moved to Jersey in 1937 for a quieter life. However three years later, Jersey was invaded. The Allies, faced with sparing much-needed troops to fight for an out of the way, sparsely populated island, essentially let the Nazi’s take Jersey. Cahun and Moore had two choices – keep their heads down at home, stay quiet and hope the Nazi’s never realized who they were. Or alternatively flee to mainland England, as many Jersey residents did. In fact, they chose a third option – to stay and to fight. They used their intelligence, their guile, and their art to fight back against the oppressor.

The title of Jackson’s book comes from the letters, artworks and propaganda posters that the two produced and distributed in Jersey. These artistic “paper bullets” included calls to local residents to rebel against Nazi rule, and morale-crushing dialogues aimed at Nazi soldiers. Insulting Hitler and scorning the wicked acts of the Nazi Party, these documents and letters came to the attention of the occupying German forces, who were incensed. Slipped secretly into cars, newspapers, magazines, cigarette packets and even directly into soldiers’ pockets, these documents undermined the stranglehold the Nazi’s held over Jersey.

Hunted down by the secret police, Cahun and Moore were finally betrayed in 1944, and imprisoned. But even in jail, they continued their crusade, fighting the Nazis by reaching out to other prisoners and spreading messages of hope.

The courage shown by these two artists is perhaps even more astonishing when we realise that everything about them was abhorrent to the Nazis. Their non-binary sexuality, their cross-dressing and their surreal art. Not to mention the fact that Cahun was half Jewish and both artists were connected to communist activities in Paris.

It is clear that extensive and exhaustive research has gone into this work. The notes and references run to over 40 pages. So, for history lovers this is a treasure trove of original material that is an absolute joy. The only down-side to this book, and sadly it is a big down-side for art lovers, is the size and quality of the images. Obviously, publishers are dependent on the quantity and quality of the original images. But here, we have less than 50 photographs, each covering barely a third of a page. If you are a Cahun and Moore fan, then read the book for the fantastic story, but rely on your laptop or art reference books to see the artworks.

This is a very timely book, given our current climate of political upheaval, with the rise of right-wing ideology across Europe. It is vital for us to understand the work of artists like Cahun and Moore during times of tyranny and oppression. Paper Bullets ticks all the boxes for us here at Daily Art Magazine – artistic resistance, plus history of non-binary artists within a book that carries a political punch. The power of art and the impact of political artists makes for a gripping rollercoaster ride that I thoroughly enjoyed.

Paper Bullets by Jeffrey H Jackson was published by Algonquin Books and is available in-stores and online.