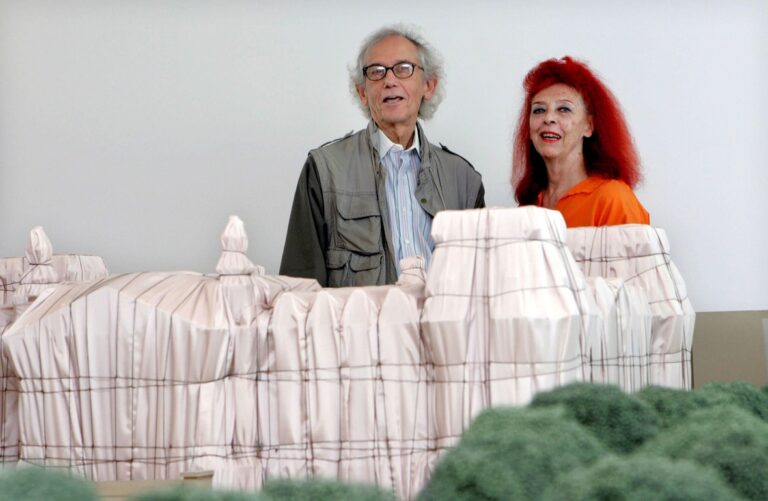 Christo and Jeanne-Claude and a model of a wrapped Reichstag in Berlin. Hanisauland.

If two people are born on precisely the same day, they must be destined to meet. He was Bulgarian, she was French. They met when he was called in to paint a portrait of her mother. They fell in love and began working together to create magnificent yet ephemeral works of environmental art. Read about Christo and Jeanne-Claude‘s love story.

They both were born on June 13, 1935. He was born into an industrialist family, she was the daughter of a military officer stationed in Morocco. In 1956 Christo Vladimirov Javacheff (1936-2020) left Bulgaria, stayed for a year in Prague (then in Czechoslovakia) and Vienna, Austria, ending up in France in 1958. Jeanne-Claude Denat de Guillebon (1935-2009) lived with her family in Tunisia to then move on to Paris in 1957. They met in October 1958 but at first, Christo was attracted more to Jeanne-Claude’s half-sister than to her…

Then things happened and Jeanne-Claude became pregnant. She married, however, a man she had been previously engaged to, just to leave him right after their honeymoon. Christo and Jeanne-Claude’s son Cyril was born in 1960, and their first collaborative artwork was created a year after. In 1964 they left Europe for the United States.

What was their art like? The young artists wrapped daily objects like books, shoes, and trolleys in paper or fabric and then propped them in familiar surroundings to create an effect of estrangement, confusion, and unfamiliarity. Many had mixed feelings about it, critics were perplexed. But the couple kept on working, expanding their scale with every project. They wrapped, for example, the Parisian bridge Pont Neuf and the Reichstag in Berlin.

Their environmental works have always raised many controversies but the couple kept on making large-scale artworks, not only wrappings. They used to fly separately as a provision in case of a plane crash: one of them should survive and continue the work. They didn’t have to worry about it until 2009 when Jeanne-Claude died. Christo remained active until 2020, his last work was made in Italy in summer 2016. Christo made floating walkways letting people walk on water.

In September 2021, a posthumous project was realized in Paris. Christo had a long-term dream to wrap Paris’ Arc de Triomphe at the center of Place Charles de Gaulle in Paris. Just like the previous projects, this one proved to be a major logistical challenge. The wrapping of the Parisian monument required 270,000 square feet (ca. 25,084 square meters) of polypropylene fabric, almost 1.9 miles (ca. 3 km) of red rope, and 1,200 workers.