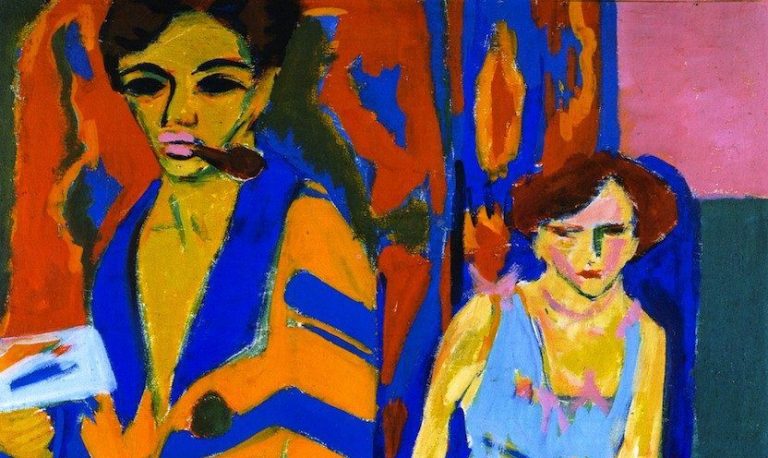 Expressionism developed the ideas of Post-Impressionism and became another prominent trend in the history of art. Some of its most remarkable representatives were Ernst Ludwig Kirchner, Wassily Kandinsky, Franz Marc, Paul Klee, August Macke, Emil Nolde, and Oskar Kokoschka. We will briefly tell you everything you need to know about Expressionism and its distinctive features.

For many of us, Expressionism is inextricably linked to the name of Edvard Munch. Munch was one of the first to pick up Van Gogh’s Post-Impressionist ideas and make good progress in this direction. He even borrowed his famous “twisting of reality” effect. However, in Munch’s paintings, the conflict between reality and the inner “I” of the hero is even more noticeable. Emotions and oppressive sorrows are sharper. But, like Van Gogh, Munch was not an Expressionist, but a Post-Impressionist and Symbolist. He was simply a forerunner of Expressionism.

The Beginnings of Expressionism

In 1893 when Munch created the first of four versions of The Scream no one had heard of Expressionism. Neither in 1905 when three artists, led by Ernst Ludwig Kirchner, founded Die Brücke (The Bridge) in Dresden. Nor when, in Munich, in 1911, Wassily Kandinsky, Franz Marc, Paul Klee and August Macke formed the creative association Der Blaue Reiter (The Blue Rider). However, although officially Expressionism first emerged as a style in 1913, the work of both these forerunners was also pure Expressionism.

Alternatively, some think that Expressionism began in 1910. This was when the art historian Antonin Matejcek first introduced the word as an alternative to Impressionism.

The Expressionist wishes, above all, to express himself. An Expressionist rejects immediate perception and builds on more complex psychic structures … impressions and mental images that pass through peoples’ soul as through a filter which rids them of all substantial accretions to produce their clear essence, are assimilated and condensed into more general forms, into types, which he transcribes through simple short-hand formulae and symbols.

In 1937, the Nazi government confiscated more than 600 of Kirchner’s artworks, labeling them “degenerative.” Kirchner could not withstand such a blow and in early 1938 shortened his life.

The Distinctive Features of Expressionism

The poet J. Becher believed that the greatest symbol of expressionism could be “a tense, open mouth in ecstasy.”

In 1933, when the Nazis came to power in Germany, they classified Expressionism as degenerate art and banned its distribution. In addition, they confiscated and, or destroyed many of the paintings. In 1937, this persecution of the Expressionists ended in a cynical action. The Nazis organized a large exhibition of works by Expressionists and other avant-garde artists called Degenerative Art. However, rather than simply exhibiting the paintings they were made subject to destruction. Some were actually destroyed; others were sold abroad.

In 1992, paintings by German Expressionists which had been scattered around the world after World War II, were brought back together for an exhibition in Berlin. This exhibition was dedicated to the events of 1937. The collected artworks showed very clearly the “tragic, gloomy art” which fully reflected the spirit of the time in which they were created.

However, the history of Expressionism did not end either in the 1910s or after the vile actions of the Nazis. In 1943, Jackson Pollock breathed new life into Expressionism when Abstract Expressionism was born in the USA. The style became so popular that it lasted until 1970 and Pollock’s paintings became some of the most expensive in the world.