The Mysterious Street from Edvard Munch’s The Scream 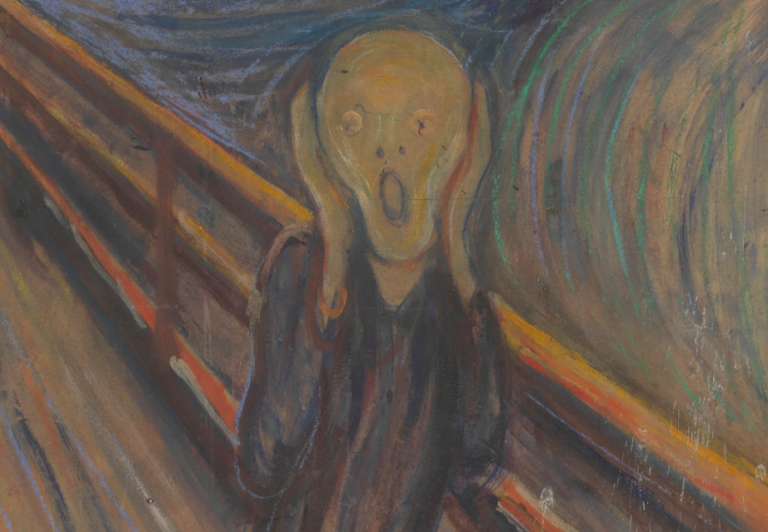 The Scream by Edvard Munch is one of the most famous paintings in the world. It’s pretty obvious why – its expression and the way the pain and the anxiety of the man are depicted is universal for all human beings. We have all – at least once in our lives – felt this way. We have not only wanted to scream publicly – we have felt like the whole world around us was bursting. The Scream became the symbol of the condition of the modern man – lost, stressed, threatened by the world and his own thoughts. Edvard Munch made four versions of the compositions created as both paintings and pastels.

In his diary in an entry headed Nice 22 January 1892, Munch described his inspiration for The Scream:

One evening I was walking along a path, the city was on one side and the fjord below. I felt tired and ill. I stopped and looked out over the fjord—the sun was setting, and the clouds turning blood red. I sensed a scream passing through nature; it seemed to me that I heard the scream. I painted this picture, painted the clouds as actual blood. The color shrieked. This became The Scream.

This memory was later rendered by Munch as a poem, which he hand-painted onto the frame of the 1895 pastel version of the work:

I was walking along the road with two friends – the sun was setting – suddenly the sky turned blood red – I paused, feeling exhausted, and leaned on the fence – there was blood and tongues of fire above the blue-black fjord and the city – my friends walked on, and I stood there trembling with anxiety – and I sensed an infinite scream passing through nature.

The road that Munch mentioned actually exists. The site of the painting is an overlook on the side of a road called Valhallveien on a hill above Oslo. The hill is known as Ekeberg Hill. This road was a popular place for citizens of Oslo to view the city. The viewpoint right before the 180-degree turn in Valhallveien has for years been supposed to be where Munch found inspiration for The Scream. Bob Egan from PopSpots spotted this place – the view and the railing resembling the painting.