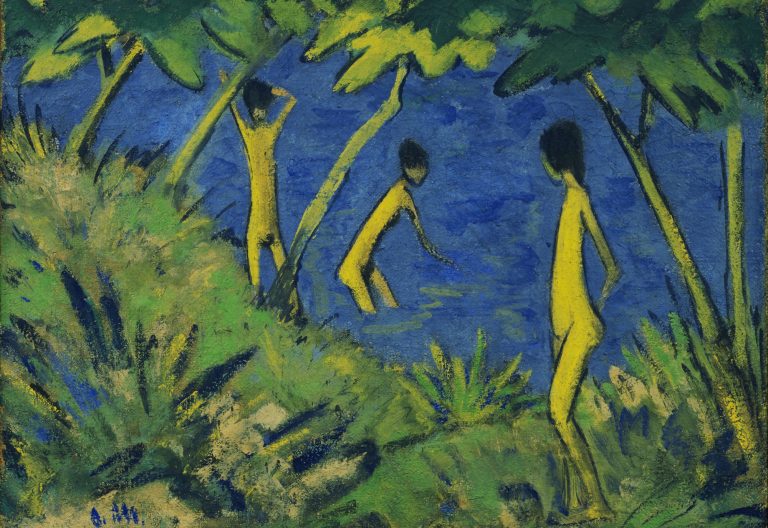 Do we talk enough about Die Brücke? Its importance for the development of modern art is undoubted. But lost between various movements and “isms” that we encounter when we read or talk about the art of the early 20th century, we tend to pay little attention to Die Brücke, which despite being short-lived, made a permanent mark on Expressionism. Today I will show you one of its members, Otto Mueller, a German-Romani artist whose contemporaries considered as Die Brücke’s magician.

Otto Mueller was born on October 16, 1874 in the former town Liebau, in German Silesia (today’s Poland). Early in life, he studied lithography, which had accompanied him throughout his career, and he developed an interest in Symbolist painting, especially since he studied in Munich under the German Symbolist painter Franz von Stuck.

In 1908, he settled in Berlin and two years later he first exhibited with Die Brücke as a guest (the group had formed in 1908). Having joined the group shortly after, he began incorporating idyllic scenes of bathers in landscapes and nude portraits into typically Expressionistic flat and distorted forms. What made him different from others was his atypical technique: he used distemper on raw canvas, which when dry created a matte finish effect.

Otto Mueller was actually a magician. In general I think that art is magic.

Mueller’s closest associates, including writers and critics, considered him definitely a “romantic” and others even a “magician”. The poet Carl Hauptmann modeled  his book Einhart der Lächler (1907), which was a sort of an artist’s biography, after him—therefore laying a foundation stone for the myth surrounding the artist.

In this Self-portrait, Mueller depicted himself smoking a pipe, with a pentagram pendant on his neck. Camaro was fascinated with his teacher, like most of Mueller’s pupils, and probably he modeled the magician from his painting from 1983 precisely on Mueller. The pentagram was not the only magic symbol that Mueller used, others often recurring in his work are masks.

In 1919, Mueller moved from Berlin to Breslau (now Polish Wrocław), where he took up teaching at the State Academy of Fine Arts and Crafts until his death in 1930. The school was deemed to be “the liveliest in Germany” in the 1920s and one of Europe’s most progressive art schools. Mueller, famous for his unconventional lifestyle and nonconformist teaching methods became very popular with his pupils who admired his charisma and sense of humor.

The 19th century saw a rise of many stereotypes and orientalisms in art. One of them was the fascination with the Romani people, which became reinforced by early photography. Photographers documented their life, yet more often these photos distorted or even debased Romani people’s lived realities rather than presenting them objectively. Others romanticized them instead.

Where did Otto Mueller stand in this wide spectrum of “gypsy” art? He was known as a “gypsy painter” since nobody really knew his family story, and since Mueller’s lifestyle was more than bohemian, many guessed he might have been Romani himself (it is thought that his mother was of Romani descent). Nevertheless, there is no doubt that Mueller dedicated a lot of his work to the Romani people. In 1927, he made a whole series of lithographs featuring Romani women and children in their daily activities put together as the Gypsy File.

Although nowadays he is considered one of the most important German painters of the early 20th century, it was not always so. During the Nazi reign in Germany, 357 of Mueller’s works were seized from German collections in 1937, deemed “degenerate“.