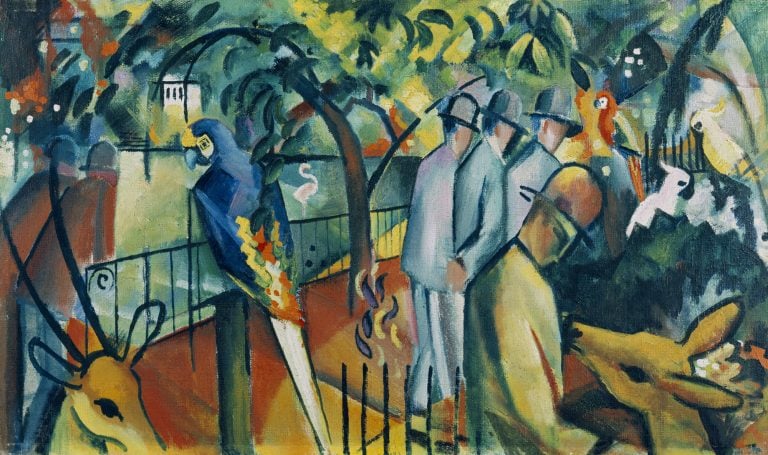 August Macke was only 27 years old when he died in Champagne, France, on September 26, 1914. He was one of the many who fell fighting for their country during World War I. Despite his short artistic career of eight years, he produced over 600 paintings and 9000 drawings. Today, he is known as the father of German Expressionism. Are you ready to delve into the short but colorful world of August Macke?

August Macke was born in Germany on January 3, 1887. His artistic genius began emerging when he was little. At the time, Macke’s father was painting landscapes as a hobby and collecting ancient art. Macke’s fascination with painting was not accidental – his first watercolors date back to as early as 1902.

In 1903, when he was living in Bonn with his parents and two other siblings, he met Elisabeth Gerhardt, the daughter of a prominent businessman. They got married in 1909. By Macke’s death in 1914, Elisabeth would sit for over 200 portraits, helping Macke hone his skills as a painter.

In 1904, Macke enrolled at the Royal Academy of Art in Düsseldorf, Germany. However, two years later, the 19-year-old became more and more frustrated with having to copy the existing works of the old masters rather than exploring contemporary artistic ideas. He left the academy and started working as a stage and costume designer at a local theatre while taking evening art classes at the Düsseldorf School of Applied Arts.

Macke and the Impressionists

In 1907, Macke embarked on his first trip to Paris. There he discovered the works of the Impressionist painters. Their subtle dappling technique and domestic subject choice had a profound impact on his art. His 1908 painting Sunny Garden is a perfect example of Impressionist inspiration over Macke’s works.

On a later trip to Paris in 1909, Macke came across the works of Henri Matisse. Impressed by Matisse’s use of color, Macke began to use brighter colors, a flattened perspective, and broader, looser brushstrokes.

Between 1906 and 1910, Macke made regular visits to Paris, Germany, and Italy, meeting with other artists, exchanging ideas, and absorbing different artistic styles across Europe. This period of traveling highlighted Macke’s genuine technical skills. He was only 22. He used his experiences to shape his own distinct personal painting style.

That same year, he met the young Expressionist painter Franz Marc in Munich, Germany, and the two began to work closely, developing a more abstract and colorful style. Details became less important for Macke and Marc. They valued the emotional response provoked by the painting by using brighter and contrasting colors. They would later form an art group called Der Blaue Reiter (The Blue Rider).

Der Blaue Reiter was a group formed by Expressionist artists based in Germany that contributed immensely to the development of abstract art. The Blue Rider artists organized group shows between 1911 and 1914 to showcase their works.

The group organized a show titled First Exhibition by the Editors of Der Blaue Reiter, held in Munich between December 1911 to January 1912. 43 works by 14 artists were on display, including August Macke. Although the paintings varied in style, the exhibition generally reflected an interest in free experimentation and expression.

The first exhibition received a mixed critical and public reception, but other artists were drawn to the group’s expressive freedom. The second show of Der Blaue Reiter, held in February 1912, included 315 works by over 30 artists.

In 1914, with the outbreak of World War I and the deaths of Marc and Macke, two of the most prominent members of the organization, Der Blaue Reiter dispersed.

August Macke and the Use of Color

In 1912, Macke met the French painter Robert Delaunay, who worked in a colorful Cubist-influenced style. Subsequently, Macke introduced a Cubist analysis of form in some of his paintings. However, he generally remained faithful to the Impressionist subject matter, portraying domestic scenes from everyday life.

In April 1914, he traveled with the Swiss painter Paul Klee to Tunisia, where Macke produced a large number of works. The emphasis on color in these paintings demonstrates the effect that Delaunay’s Cubism had upon him.

I would consider myself incredibly lucky if I was to return from this war. I think about all the beautiful things that I have witnessed and that I have you to thank for.

Macke’s career ended abruptly due to his premature death in the second month of World War I at the front in Champagne, France on September 26, 1914.

We painters know that without his harmonies, whole octaves of colour will disappear from German art, and the sounds of the colours remaining will become duller and sharper. He gave a brighter and purer sound to colour than any of us; he gave it the clarity and brightness of his whole being. With his death one of the most promising and daring lines of development of our German art has been abruptly severed; none of us are capable of carrying it forward.

Two years later, Marc too was killed on the battlefield.