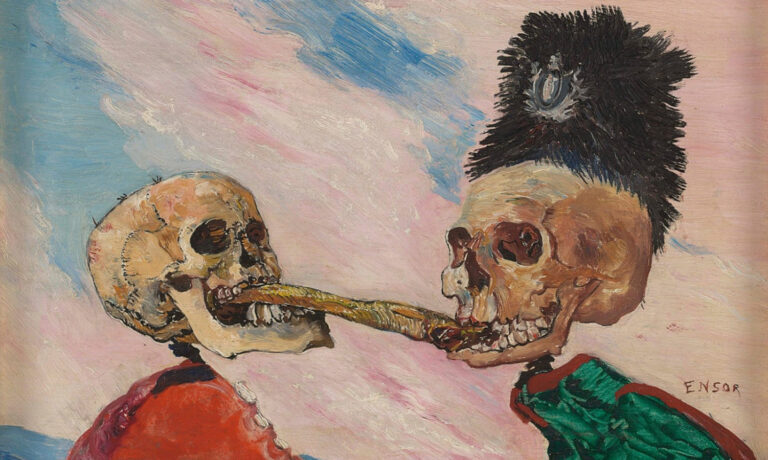 Do you know the late Victorian and avant-garde painter James Ensor? Often likened to Edvard Munch is his ability to convey the miseries of human experience, while often macabre, his paintings are also colorfully carnivalesque.

Where Edvard Munch (1863–1944) presents us with vast vacuums of bleak desperation, James Ensor (1860–1949) presents us with black comedies featuring sublimely ridiculous characters (such as these two skeletons) doing equally silly things. He paints a picture that revels in the absurdity of life, preferring to use his brand of dark humor to extol the hysteria of being alive while at the same time commenting on its pain, its fragility, and its temporal nature.

In this particular painting, Skeletons Fighting Over a Pickled Herring (1891), Ensor is the herring, and he is being ripped apart by art critics after receiving negative responses to his work. The yellowed jaws of the two critics (one still wearing a rather ostentatious hat and the other with a few comical wisps of hair still attached) are firmly clamped onto the poor little fish as they pull and fight over it. The image is both grotesque and hilarious, leaving us in no doubt as to what Ensor thought about their critiques! It makes me wonder – does the critic make the painting or does the painting make the critic? Now there’s a pickled herring to fight over!

Ensor’s psychological approach was unusual among his peers. He tended to look inwards – much like Munch – and what we see is an impressionistic and subjective interpretation of his interior landscape. His inner thoughts were colorful, perhaps because when he was growing up his mother had a souvenir shop and he was able to surround himself with curiosities from a young age. His inner thoughts, however, also leaned toward the darker side of life: he seemed fascinated by the irrationality of human behavior, but also the mean curiosity with which we sometimes observe others. This can be seen in Skeletons Fighting over a Dead Man below (1891).

Onlookers stand back as the central almost tragicomical performance takes place. It is farcical: two skeletons fight over a dead body on the floor, while another body hangs in the middle with the word “civet” (“stew” in French). Can it be that they are fighting over food? The masked onlookers appear concerned, puzzled, amused, and even delighted by the spectacle, but they also appear hungry, one or two of them holding knives ready to cut off their share.

Ensor uses the figure of death – a figure that needs no sustenance of any kind and feels no shame or embarrassment – to mirror the baser behaviors of human beings. In the meantime, Ensor’s live people are masked: we do not know what they are thinking behind the concealed faces. This creates a frightening and unpredictable situation where normal expectation has been subverted.

In Masks Confronting Death (1888), Ensor again uses a skeleton or a death figure, but this time places it in the midst of masked onlookers. They close in around the central figure, curious perhaps, or maybe irresistibly drawn to it in recognition of the ultimate destiny of all living things. There is no sense of the absurd in this painting, instead, there is isolation and inevitability. Ensor had lost his father the year before he painted this, so perhaps he was confronting the impermanence of his own life.