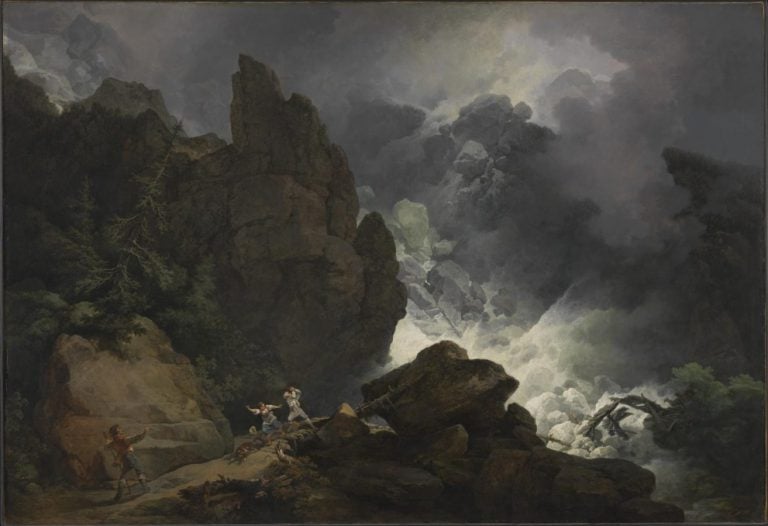 Although performing arts may be the popular avenue to convey drama, visual arts are also a powerful medium for the subject matter. Visual artists have explored many exhilarating and morbid themes to convey drama on canvas. The unfolding of impending excitement and creating a melodramatic effect on the viewer requires tremendous skill and imagination. Let’s explore some dramatic scenes in art.

Thunderstorms convey violence and destruction, as well as power and magnificence. They evoke powerful and primal emotions. The sheer drama of the phenomenon is captivating, inspirational, and terrifying. Many ancient cultures designated a God of Rain and Thunder, such as Zeus, Indra, Set, or Thor. These were fearsome beings capable of great benevolence or destruction.

A Coming Storm is a profoundly moving rendition of darkness spreading over the very still Lake George in upstate New York. The artist, Sanford Gifford, has conveyed a sense of both blissful serenity and doom in the same scene. Gifford served in the Union Army and may have used the impending storm as a metaphor for the uncertain times brought about by the Civil War. Interestingly, the first owner of the painting was celebrated Shakespearean actor Edwin Booth, brother of Abraham Lincoln’s assassin, John Wilkes Booth.

This Storm in the Mountains, on the other hand, depicts a powerful storm rolling over breathtaking green planes. Here, the dark clouds frame the mountain ranges to form a forbidding yet somehow inviting portal. It is the work of celebrated artist, Albert Bierstadt. Although Bierstadt was known for his incredible landscape paintings of the Western United States, this painting is set in Germany, where it depicts the three distinctive peaks of the Watzmann in the Berchtesgaden Alps, located in southern Bavaria.

Maritime travels have been prevalent since ancient times as a means of commerce and exploration, and continue to serve a vital function in the global economy today. There is, however, so much that we don’t know. According to an estimate by the National Ocean Service, a mere 5% of the Earth’s oceans have been explored and charted. Thus, despite its deep significance in the human experience, oceans still largely remain an elusive and powerful mystery. They are also another reminder of the frailty of human life before the power of the high seas.

In this painting is a nocturne view of a group of unfortunate fishermen caught in turbulent waters. Their small vessel struggles in its attempt to maneuver through the rough seas near the Isle of Wight. The flickering lamp, barely visible, symbolizes the fleeting aspect of humanity, while the turbulent waters represent the terrifying and sublime power of nature. The artist, Joseph Mallord William Turner was a respected oil painter, particularly of maritime scenes. This work was first exhibited at the Royal Academy in 1796.

No discussion about maritime artworks would be complete without a mention of the elite Russian artist, Ivan Aivazovsky. This painting too features a ship in distress, thus making the comparison between fragility of humanity and the enormity of the ocean. The seagulls appearing in the painting give an idea of the grand scale of this painting. The choppy waves have been depicted in mesmerizing detail, one can almost taste the salty waters here. Dark and stormy skies add to the drama and conjure a fearful image while a lifeboat attempts to escape from the failing ship.

Around the late 1800s, there was a renewed period of volcanic activity that piqued the interests of many. Paintings of volcanos became a favored theme and Mount Vesuvius became the subject of countless works. This terrifying natural occurrence is yet another reminder of the mighty forces of nature, and it also makes for a phenomenal dramatic theme.

James Hamilton was among the many painters who were drawn to the subject. Hamilton chose a wide-angle to indicate not only the magnitude of the volcanic eruption, but to also show how the powerful fiery eruption filled the valley with an amber glow. Hamilton was drawn to the philosophical aspect of volcanos and demonstrated an appreciation for the cyclical nature of civilizations.

It is fair to say that Joseph Wright of Derby was captivated by the eruption of Mount Vesuvius as it was the subject of about 30 of his paintings. Wright traveled to Naples in Italy once between 1773 and 1775 and drew on this experience for the rest of his career. Several studies were made in Naples and he completed the paintings upon his return to England. In this painting, there is a focus on the destruction of the structures of Pompeii.

It is interesting to note that Mount Vesuvius erupted in 1777 so Wright may have already left Italy by the time of the eruption, which would make the images of the depiction a work of the artist’s imagination.

The Old Testament has so many possibilities for dramatic scenes that it is a shame that there aren’t more TV shows inspired by scripture.

This painting encapsulates the moment when Jophiel, the archangel of wisdom, understanding, and judgment, expelled Adam and Eve from the Garden of Eden. Jophiel is brandishing his flaming sword over the smaller figures of Adam and Eve, as well as over the notorious serpent. The bright light from the heavens illuminates and sharply contrasts against the darkened clouds. The grand stature of Jophiel, the desolate figures of Adam and Eve, and the defiance of the hissing serpent add to the intrigue and the drama shown.

The next painting is the creation of a self-taught Scottish painter, John Faed, a portraitist with a flair for genre subjects as well as literary and historical illustrations.

Here, the British painter John Martin depicts Joshua, the commander of the Israelite armies during the biblical battle at the ancient city of Gibeon.  Joshua asked God to prolong daylight by commanding the sun and moon to stop in their courses so that the Israelites could destroy the fleeing Amorites.

Joshua is depicted standing atop the rocks at the center as he makes his impassioned prayer amid a dramatic natural setting. It appears that the heavens are opening up to Joshua, heeding his prayer.

What could convey more drama than violent homicide? There are several vivid examples of murder from literature, historical events, or scripture which feature on the canvases of several renowned artists.

Jean-Paul Marat was a journalist during the French Revolution who wielded political influence through his newspaper, L’Ami du peuple (The Friend of the People). He was assassinated by royalist sympathizer, Charlotte Corday, who believed him to be a threat to the Republic. She hoped his death would end the violence throughout France.

Corday reached Paris in July 13, 1793 and gained an audience with Marat by promising to betray the Caen Girondists. Marat, who had a chronic skin condition, was in his usual bath when Corday stabbed him in his chest. He died almost immediately, and Corday waited calmly for the police to arrest her. This painting is a revised version of historical events portraying Cordy holding the weapon as a horde of hysterical revolutionaries burst into the room to arrest her. This painting is the work of Belgian artist, Jean-Joseph Weerts.

In famous classical lore, when Perseus killed Medusa, the blood dripping from her severed head turned into serpents. This grotesque portrayal of the severed head of Medusa was a collaboration between artists, Peter Paul Rubens and Frans Snyders.

Ruben’s contribution to this horrifying masterpiece was the portrait of the severed head of Medusa on a stone ledge. Her head encapsulates the horrific moment of her beheading with bloodshot eyes that are bulging in terror. Her expression of horror is further enhanced by her pale skin, contracted brow, and bloodied mouth. The very realistic and agitated snakes slithering away from her scalp were the contribution of Frans Snyders. They have been identified as European grass or water snakes.