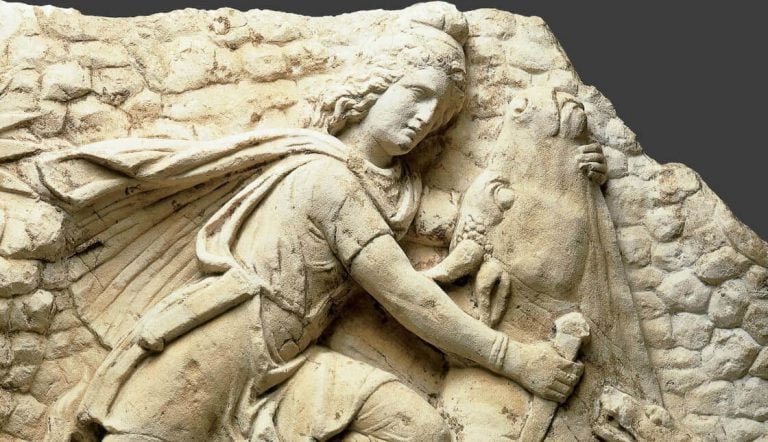 Mithras Slaying the Bull is a compilation of the entire religious and symbolic images of Mithraism. It reflects promised immortality and personal salvation. It helps followers seek inner peace and cosmic redemption. It helps souls’ journeys through the otherworld. Mithras Slaying the Bull is a masterpiece of ancient Roman sculpture, and it is central to Mithraism through its literal and symbolic significance.

The ancient Roman Empire was an interesting blend of beliefs and behaviors. Many cults and religions coexisted within its wide borders. During the 3rd century CE, the official Roman pantheon was reigning, Christianity was emerging, and a new mysterious religion called Mithraism was peaking.

Mithraism centered around the god Mithras, and it was monotheistic like Christianity. It emphasized mysterious rituals and initiation ceremonies that included wearing animal masks and performing animal sacrifices. The small elite circles of practitioners would gather in altered states of consciousness through drinking wine and rhythmic chanting of songs and hymns. Such was the world when the carved frieze Mithras Slaying the Bull was created in 150-200 CE.

In the top central area of this frieze is the protagonist himself, Mithras. He was an Indian-Persian god who blended Eastern and Western beliefs on glorifying war, overcoming evil, and achieving salvation. However, despite his origins, Mithras is not depicted as an Indian or Persian person but as a Western European with his very Roman classicized face.

Mithras Slaying the Bull depicts the beautiful young god as ethnically similar to its target audience: city-dwellers of Rome. The carved frieze also presents Mithras in Roman military garb with his cape and tunic compared to his mythical nakedness. The unknown artist tailored the frieze towards the greatest supporters of Mithraism who were Roman military members. With his Phyrigian cap atop his head symbolizing his freedom, Mythras stabs the wild bull with his knife. Mithras Slaying the Bull allies with its target audiences through its ethnicity, clothing, and violence.

It depicts the most dramatic moment in the narrative when Mithras captures and slays the wild bull. The primordial bull represents barbarism, and its slaying depicts Mithras creating order over chaos. When the bull was dying, its body began to produce miracles central to Mithraism. From its stabbed spine grew wheat. From its dripping blood grew grapes. Wheat and grapes are the barbarian ingredients to the more civilized products of bread and wine. From the death of barbarism comes the fruits of civilization. The timeless link between animal sacrifice and agrarian fertility is strengthened in this work.

Mithras owned a faithful dog who assisted him in the capture of the wild bull. The dog is seen on the surviving bottom right edge. The dog’s body is missing its hindquarters. Therefore, the surviving frieze is incomplete as supported by the missing body and jagged edges. Originally, the frieze would have included the dog’s entire body in the killing drama. What do you think the dog’s tail would have looked like while the dog lunged forward towards the bull?

Directly below the bull’s fatal stab wound is a python-looking snake. It rears its head and flicks its serpent tongue towards the cut. The snake was sent by the Indian-Persian god of evil, Ahriman, to prevent the birth of the beneficial grape plant. Ahriman instructed the snake to lick and swallow the bull’s weeping blood. The snake’s tongue inches towards the gash to capture the escaping blood. However, the snake was unsuccessful as a few drops of blood hit the ground below and grapes began to immediately grow. Ahriman’s sabotage attempt failed! Mithras Slaying the Bull depicts this image of evil’s failure.

In addition to the snake sent by Ahriman, there is an evil scorpion as well. The scorpion appears near the hind legs of the bull on the ground. Its mission was to sap the vital essence of the bull by piercing the bull’s scrotum and draining its semen. A hint of the ball sac can be seen near the scorpion’s slicing pincers. In Roman belief, the male genitalia of animals and humans had primordial forces of life and protection.

By sapping the bull’s life force, Ahriman hoped to prevent the creation of wheat. However, like his snake companion, the scorpion fails too. Before the scorpion can completely drain the scrotum, wheat unexpectedly sprouts from the bull’s spine. Mithras Slaying the Bull does not depict the wheat or the grapes from the narrative, but the implication is there from the snake’s and scorpion’s presence. Ahriman’s second sabotage attempt failed. Good overcomes evil.

Overseeing everything is the Roman sun god, Sol. He is the solar deity who aids and assists Mithras through his heroic deeds to subjugate the evil of the cosmos. Sol is the personification of the sun, and he is depicted as a person with a sunburst crown. He appears as an apparition in the frieze’s upper left corner. Like Mithras, he has a classical Roman appearance in his face and garb. Sol’s looks fuse the Eastern origins to the Western destination of Mithraism.

Behind the storytelling and action of Mithras are cave walls. They are depicted as the decorative background of roughly shaped rocks. Followers of Mithras would congregate in hidden caves found naturally in the countryside or created artificially in the urban underground. This type of dedicated cave was known as a Mithraeum since it was essentially a Mithraic temple.

Inside a Mithraeum is where followers would stage and perform their devotional acts. Eating bread and drinking wine were regular events that occurred around a centrally-placed icon such as Mithras Slaying the Bull. The cave walls of a Mithraeum are echoed by the cave walls of Mithras Slaying the Bull, but they also echo the narrative of Mithras too.

Mithras was born from rock deep within a hidden cave on December 25, and it is not a coincidence that Christianity later supplanted Mithraism with Jesus having the same birthday. Moreover, it was inside a cave that Mithras lured, captured, and slew the wild bull. Therefore, caves as Mithraea (plural of Mithraeum) were steeped in symbolism. Like a womb, they represented the origin of life. They also rendered the cosmos with their darkness and obscurity. Hence such a simple detail of roughly hewn rocks in the background of Mithras Slaying the Bull indicates the artwork’s location, its narrative, its symbolism, and its manufactured source material.

Little is known about the rituals and ceremonies of Mithraism that surround Mithras Slaying the Bull. Participation in the mystery religion was limited to initiates (mystai). As a result, little information is documented. There are a few references to the trials that mystai endured to develop control over their emotions and feelings similar to Stoicism. This quasi-apathetic objective aimed to purify and transcend the followers through seven stages of initiation to reach an ultimate spiritual goal.

A very loose comparison to Nirvana in Buddhism could be proposed. The seven stages were Raven (Corax), Nymph (Nymphus), Soldier (Miles), Lion (Leo), Persian (Perses), Runner of the Sun (Heliodromus), and Father (Pater). Mithras Slaying the Bull was a devotional icon used during the seven stages. Although now removed from its hidden subterranean temple, it still evokes the mysterious and ancient world of Mithraism. The Cincinnati Art Museum now displays the work within its extensive collection. Mithras Slaying the Bull is a masterpiece of ancient Roman sculpture, and it is central to Mithraism through its literal and symbolic significance.