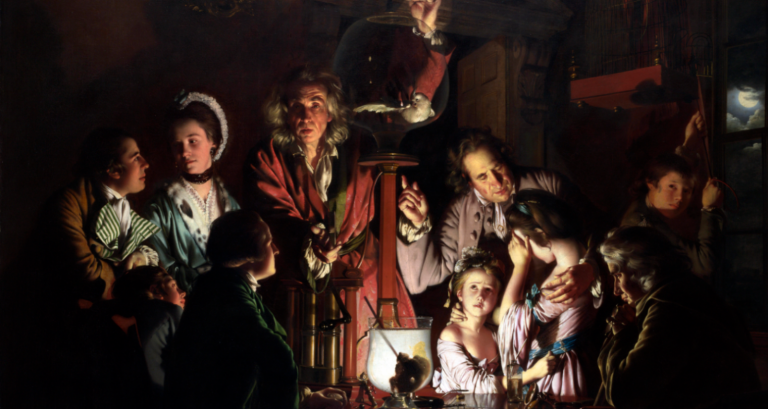 Joseph Wright of Derby, An Experiment with a Bird in an Air Pump, 1768, National Gallery, London, England, UK. Detail.

Joseph Wright of Derby is deemed as the first painter to capture the spirit of the Industrial Revolution. His paintings portray the zeitgeist of his time during the Age of Enlightenment. The Enlightenment was a shift in philosophical thinking, turning on a scientific approach instead of the traditional religious view of the world. Wright of Derby spent most of his life in his hometown. The geographical identifier ‘of Derby’ was used to distinguish him from another artist of the same name.

Britain is the birthplace of the Industrial Revolution. From the second half of the 18th century, rural, agricultural societies transformed into urban and industrialized ones. It was made possible with the extensive use of steam powered engines, firstly in the textile industry and then elsewhere. Science was the word of the day and artists were mesmerized by the new world that was emerging.

An Experiment with a Bird in an Air Pump

A gruesome experiment is taking place on the canvas: a natural philosopher, a forerunner of what today we call a scientist, is demonstrating Robert Boyle’s air pump. The device sucks out the air from the glass bowl on the top where the cockatoo is slowly getting asphyxiated. Today such an experiment would be unthinkable. However, Wright of Derby leaves the fate of the bird ambiguous. The hand of the natural philosopher is placed on top of the glass jar. What is he doing? Is he waiting until the last moment to open the jar and save the bird or is he making sure that the jar is airtight, sealing the fate of the bird?

Around the philosopher, the onlookers react in various ways. First, we notice the two little girls. They are practically horrified. The older one shields her eyes while the younger one tugs at her sister’s dress for comfort. The father does not seem to share their sentiment. On the contrary, he instructs his older daughter to look at the experiment. To the right of the philosopher, we see a young couple. They plainly do not care about the experiment at all. They are too busy with each other. Next to them a little boy and a man are fascinated with the science involved. Lastly, an older man next to the girls sits in deep thought. He ruminates on the philosophical repercussions of the experiment. Through science man had at last tamed nature. A new world was dawning, but where would this lead humankind?

Derby during Wright’s time was a center of the Industrial Revolution. The painter was close with members of the Lunar Society, which was a group of entrepreneurs who met and discussed about how the new-found science could be used in practice in the factories. One of them was Erasmus Darwin, the grandfather of Charles, and probably the model for the thinking man in the painting. Another was John Whitehurst, the model for the natural philosopher conducting the experiment. The Lunar society is referenced by the full moon outside the window as well.

A Philosopher Giving a Lecture at the Orrery

A group of people gather, fascinated around another marvel of their time, listening to the grey-haired lecturer. The gold device in the center is an orrery, a mechanical model of the solar system. When in motion, each planet and its moons rotate according to their orbit around the sun in the center, which is represented by an oil lamp. The model used by Wright of Derby has large metal rings to simulate eclipses.

Once again, the ideals of the Enlightenment come forth, most prominently in the man taking notes, next to the lecturer. Man has come to a point where he begins to understand not only the natural world, as in An Experiment with a Bird in an Air Pump, but the cosmos as well.

Wright of Derby gave his purely scientific subjects the same treatment reserved only for historical paintings, that is subjects taken from mythology and the Bible. According to the French Academy of Art and later the British one as well, history painting was the highest, most important genre. In short, Wright of Derby depicted scientists and common people the way gods were presented. In his paintings, scientific thought is the moral he champions. To structure his composition, Wright of Derby looks to the popular at the time ‘conversation piece’, an informal group portrait showing families or friends interacting with each other.  In addition, he imbued his painting with stark interchanges of light and shadow, reminiscent of the works of Caravaggio, to create the dramatic atmosphere.

Apart from the mechanical wonders of his day, Wright of Derby was interested in chemistry as well, and its predecessor, alchemy. Traditionally, alchemists were trying to create the philosopher’s stone, a substance that could turn ordinary metals to gold or silver, also being a step forward in achieving immortality. However, even if this substance remains elusive, alchemists made some interesting discoveries as a byproduct.

On the canvas we see Henning Brand, an alchemist from Hamburg, discovering phosphorus in 1669. In front of him, in a flask, phosphorus is illuminating the gothic study. The alchemist stares in wonder while praying for the successful conclusion of his operation. Behind him his two assistants, amazed, point towards the glowing flask. The painter uses religious imagery to convey the solemnity of the scientific breakthrough. The alchemist reminds us a saint or a prophet receiving a vision.

While the painting is known as The Alchemist discovering Phosphorus Wright’s original title is The Alchymist, in Search of the Philosopher’s Stone, discovers Phosphorus, and prays for the successful Conclusion of his operation, as was the custom of the Ancient Chymical Astrologers.