A Very Florentine Story: Perseus and the Head of Medusa by Benvenuto Cellini 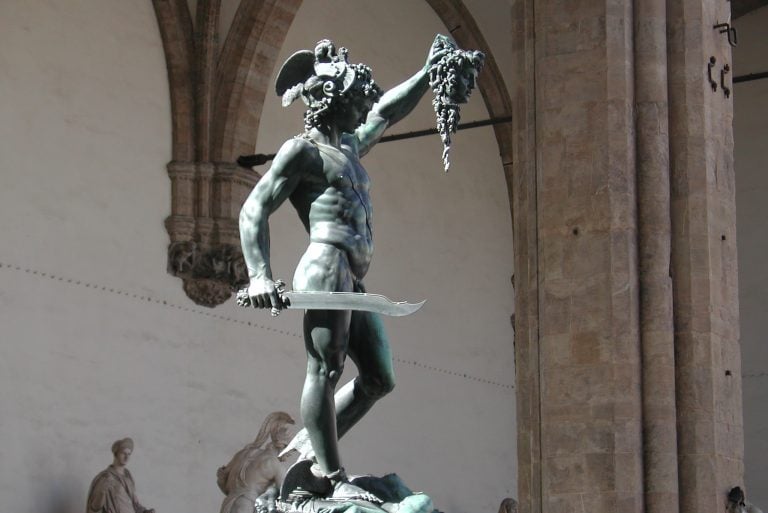 Benvenuto Cellini’s Perseus and the Head of Medusa is a sculpture that is commonly overlooked. In fact, it could be the most regularly overlooked work of art in the world. Regarded by art historians as one of the masterpieces of 16th-century Florentine art, it has all the hallmarks not just of a great work of art, but that of a fantastic and uniquely Florentine story, too.

Standing in Florence’s Loggia dei Lanzi on the famous Piazza della Signoria in Florence, rich with some of the world’s most famous sculptures by Italian masters, including Michelangelo’s David, Baccio Bandinelli’s Hercules and Cacus, Donatello’s Judith and Holofernes, and Benvenuto Cellini’s Perseus with the Head of Medusa. The latter stands opposite Michelangelo’s David (now a copy, with the original located in the nearby Galleria dell’Accademia), as the millions of selfie-stick wielding tourists snap themselves with the famous crack-shot shepherd, if only they’d turn around and look.

The dark, foreboding, and bloody bronze of the Greek hero Perseus is carrying the severed head of the gorgon Medusa. Once you get to know a little of Cellini, you will realize its position opposite David is paramount. It’s all part of Cellini’s shadow play, and just one example of the multi-layered story of this amazing sculpture and the man who made it.

Who Was Benvenuto Cellini?

Benvenuto Cellini (1500-1571) was a Florentine goldsmith, sculptor, and author. In his lifetime, he earned a reputation of a troubled, wild, and vain genius. Fun fact is that Cellini died exactly in the same year when Caravaggio was born, another complicated figure in art history with an affinity for alcohol and brawls.

Although, Cellini was a prolific artist and his genius was clear, what also characterized him were his run-ins with the law. He was repeatedly prosecuted for sodomy, theft, and even murder.

The only extant work of precious metal that can be now attributed to Cellini is the famous Saliera located in Kunsthistorisches Museum in Vienna.

In true Mannerist style, Cellini takes us on a trip to ancient Greece and the story of how the hero Perseus, depicted by Cellini with winged sandals from Hermes, satchel gifted by Athena, met and slayed (without directly facing) the infamous gorgon, Medusa. Cellini presents his bronze statue in all of its macabre glory, complete with gushing blood from the severed head he holds, and from the writhing body on which he stands.

“The Bronze Is Starting to Clot!”

Central to the story of the statue is the daring feat and technique Cellini employed, casting the whole sculpture from a single piece of bronze, something rarely done, particularly with a sculpture of such complexity. Though Cellini was competing against monumental works such as that of Michelangelo’s David, he wanted to set himself apart, and win his place in Florentine greatness.

The story goes that as the bronze was being cast in Cellini’s workshop, a now elderly and ill Cellini lay incapacitated on his sickbed. A storm broke, and in the cool of the night, Cellini’s assistants failed to keep on top of things and the metal began to clot as it cooled. Cellini jumped from his near-deathbed, shouting and ordering everything possible to be slung into the fire to raise the heat. Just in time, the heat started to rise, and the sculpture was saved. Cellini likened this revival to raising the dead, not only meaning the saving of the great work of art but also the salvation of Cellini himself.

As with most famous artworks, Perseus with the Head of Medusa is surrounded by politics. It was commissioned by the great Cosimo I de’ Medici in 1545, a great artistic patron and advocate of culture, science, and philosophy. Perseus represented the power of Cosimo I who cut off the “head of the Republic.” All very symbolic and political, celebrating the control of the Medici over the Florentine people through the mythological hero.

Though perhaps the most interesting part is the interplay Cellini mastered between his new statue and those of the great masters surrounding it on Piazza della Signoria. Presented on the square in 1554, Cellini’s masterstroke was Perseus holding up the head of the gorgon, which in mythology turned unfortunate viewers to stone. And who was it that stood opposite, sculpted in stone? The famous David, of course. Cellini’s Medusa had even reduced the greatest sculptor’s work, giving life to his own in bronze.

See it for Free!

Unlike much of Florence’s great masterpieces, tucked away in the manicured halls of the Uffizi or Galleria dell’Accademia, Cellini’s work is out in the open for all to admire. It’s a true privilege and a spine-tingling experience to enter the Piazza della Signoria and explore the statue, revealing itself to you as you walk around it, each angle showing something new, asking a new question of the viewer.

Each time you feel you’ve seen it, its essence once again escapes you, leaving only more questions. To me, it is one of the most enigmatic and greatest works of art of the Renaissance, not only for its endless beauty and intrigue but also because of its truly Florentine story of politics, intrigues, and of course, great beauty.

After 15 years working in digital marketing, I now split my time between my digital marketing consultancy, alongside studying for an MA in Art History. I'm passionate about looking at how an artist came to create a piece of work, for whom and what was the political and social history and events of the time that influenced its nature and how it was or is now perceived. Specialising in art of the Classical period and the Renaissance, however equally passionate about non-European art. I live with my wife and 2 year old in the historic city of York, UK.