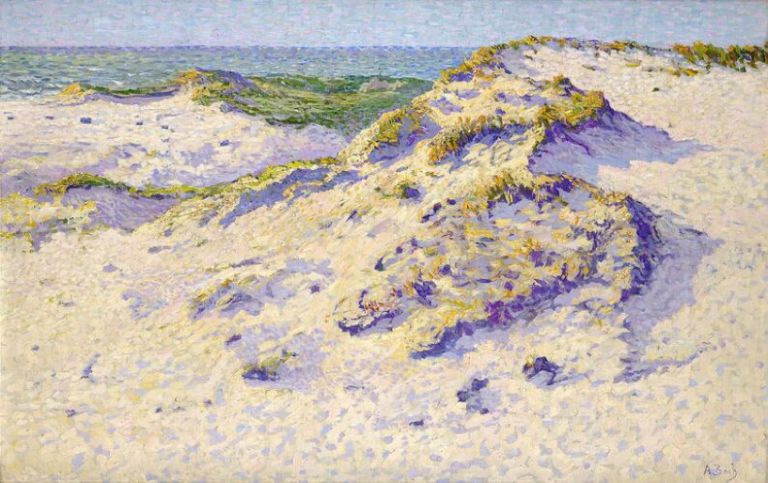 Anna Boch was a Belgian painter. Curious about the trends of her time, such as Pointillism, Luminism, and Art Nouveau, she dedicated much of her life to reproducing her favorite themes: landscapes and flowers. Woman of taste, she was also a collector and knew how to surround herself with talented people. Here are 5 facts about Anna Boch.

1. Anna Boch was the only female member of Les XX

Based in Brussels, Les XX (literally the twenty) was a group of 20 painters, designers, and sculptors, including James Ensor, Fernand Khnopf, Felicien Rops. Their secretary was Octave Maus, a lawyer, art critic, journalist, and also Anna Boch’s cousin. Initially created for Belgian artists, they later accepted French artists like Auguste Rodin and Paul Signac. Les XX were renowned for their concerts, conferences, and exhibitions. Each year they held a major show to exhibit their art. This was also an opportunity to invite brilliant talents of their time to participate: Camille Pissaro, Georges Seurat, Paul Gauguin, Vincent Van Gogh, Paul Cézanne, Odilon Redon, among others. In short, these events as well as their magazine L’Art Moderne definitely put Brussels on the art map.

Anna Boch was the only female member of Les XX. She joined the group in 1885 and exhibited regularly at their exhibitions. By the way, it was during one of these shows in 1902 that the Belgian state bought one of her paintings, Coast of Bretagne which hangs in the Royal Museum of Fine Arts in Brussels. This was a definitive recognition of her talent. 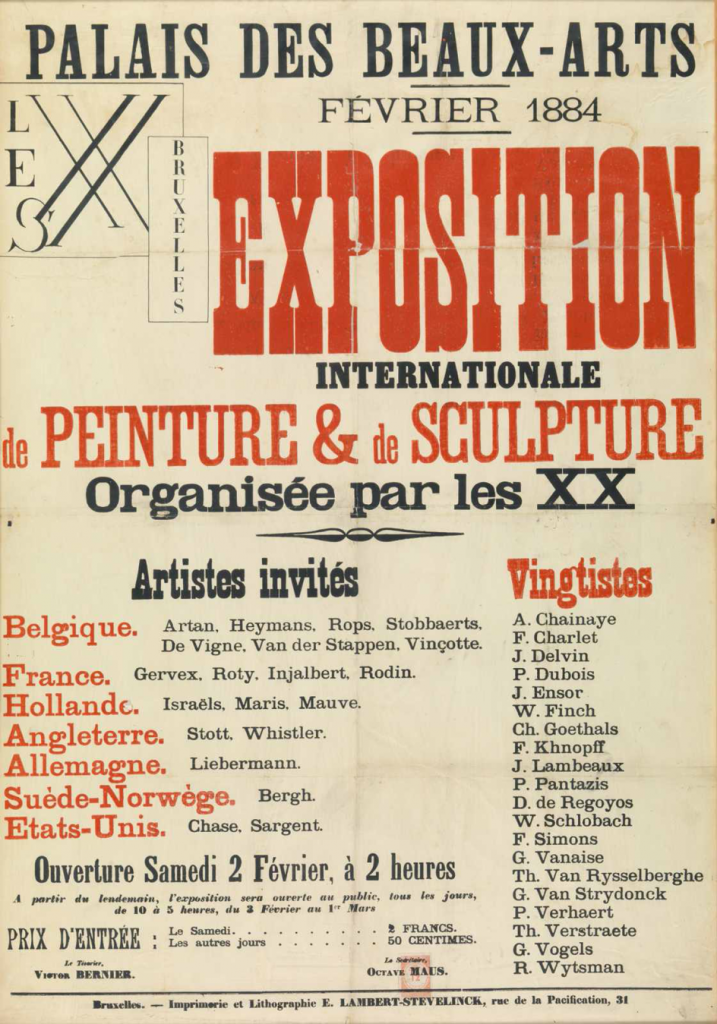 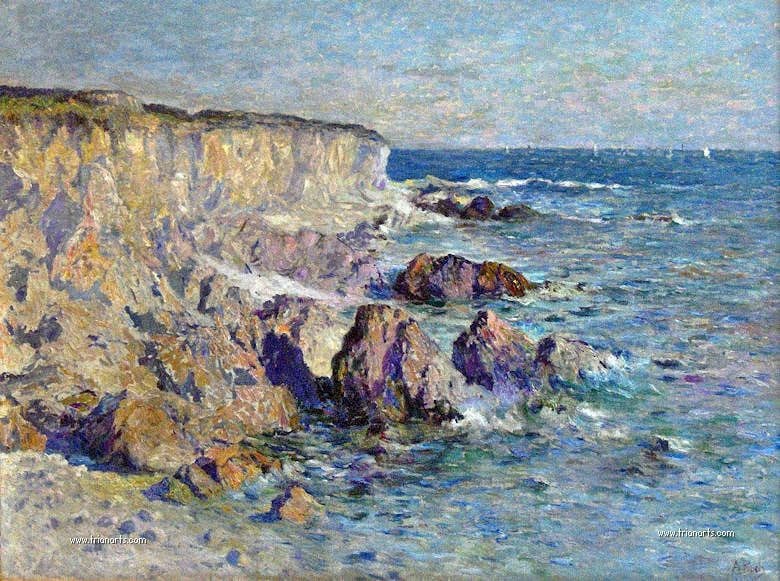 Poster of the first exhibition of Les XX.

This is the painting the Belgian state bought from her, still visible at the Royal Museum of Fine Art of Belgium.

2. She was aware and curious about the trends of her time

In 1883 a crisis broke out within Les XX. During their annual exhibition, the presentation of Seurat’s painting A Sunday on the Island of la Grande Jatte caused a scandal. Consequently, the work divided the group. The Divisionist approach appealed to Boch and thus she supported this innovative painting. However, she was not alone. There was also Theo van Rysselberghe, the best Belgian representative of this new movement. He introduced her to this technique (and painted her portrait as well). Inspired by this style, Boch began using it in her own works, making it more personal by relying on her previous apprenticeships. Mixing with other influences of the Pont-Aven school, the Nabis, or Japonisme, she created personal pieces, mainly marked by intimacy and contemplative beauty.

This openness to the trends of her time is also reflected in her collection. 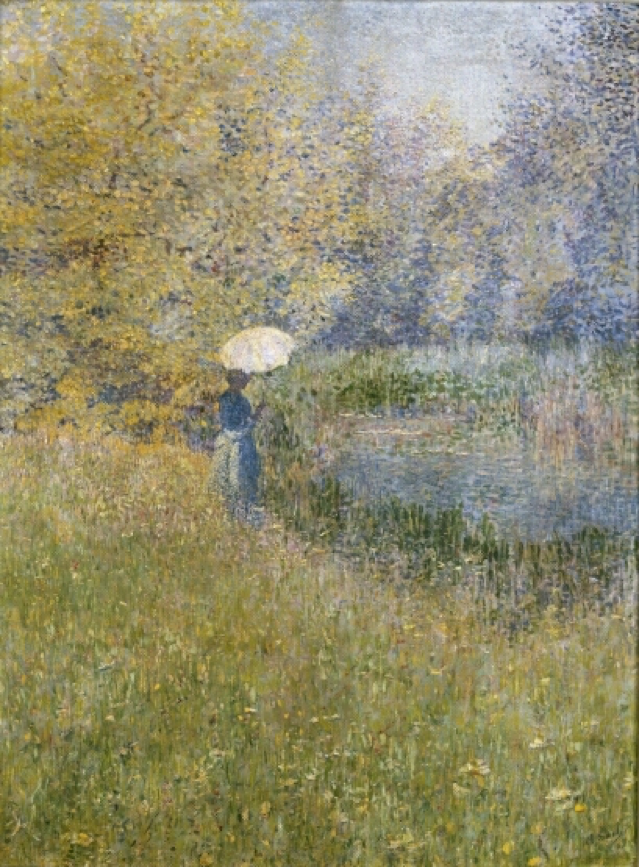 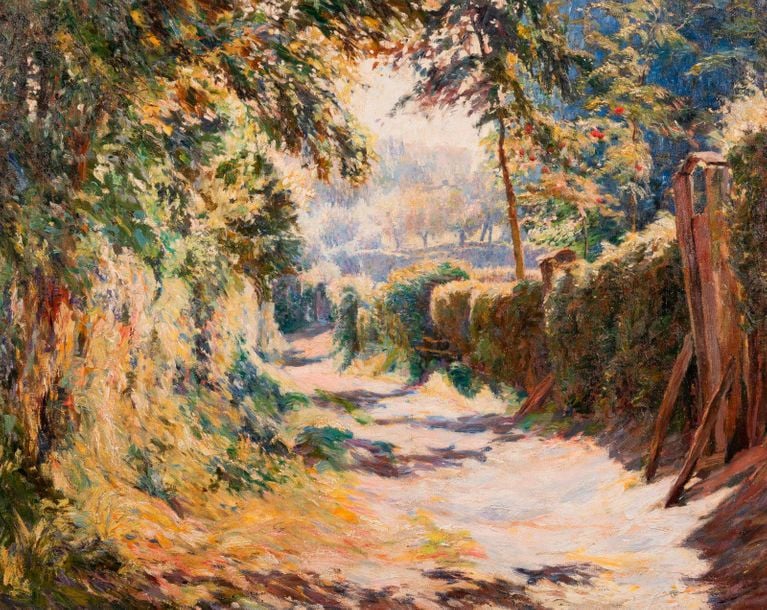 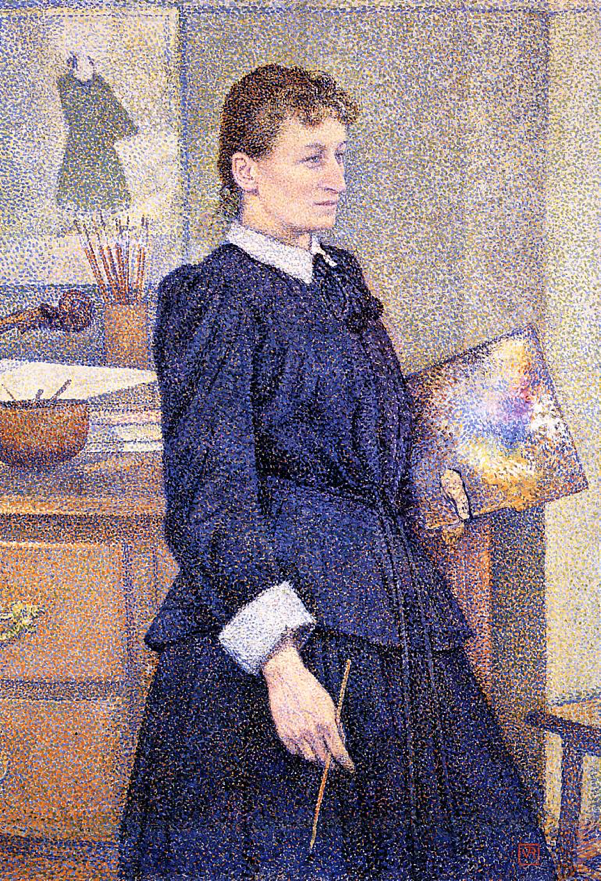 Woman in a landscape

Anna Boch’s aesthetic of intimacy at its best can be seen at the Stedelijk Museum, Amsterdam.

View of a shady path

A work from Boch’s luminist period.

Anna Boch in her studio

A portrait of Anna Boch by the most renowned Belgian Neo-Impressionist painter, also her friend and teacher.

She was a passionate and insightful collector. At the time of her death, she left a collection of over 400 works, unfortunately dispersed at a sale. Half were her own works and the rest contained some gems: paintings by Paul Gauguin, Georges Seurat, James Ensor, a screen by Émile Bernard, two sculptures by Constantin Meunier, and more.

She also owned two of Van Gogh’s works. One was The Red Wine at Montmajour which, according to legend, is the only painting Van Gogh sold during his lifetime. The other, acquired after his death, was Plain of the Crau with Peach Trees in Bloom. Interestingly, she sold them both around 1906 to buy the Seurat’s painting! Finally, she bequeathed this painting as well as those of Gauguin, Seurat, and Ensor to the Royal Museum of Fine Arts of Belgium in Brussels where they can still be admired. 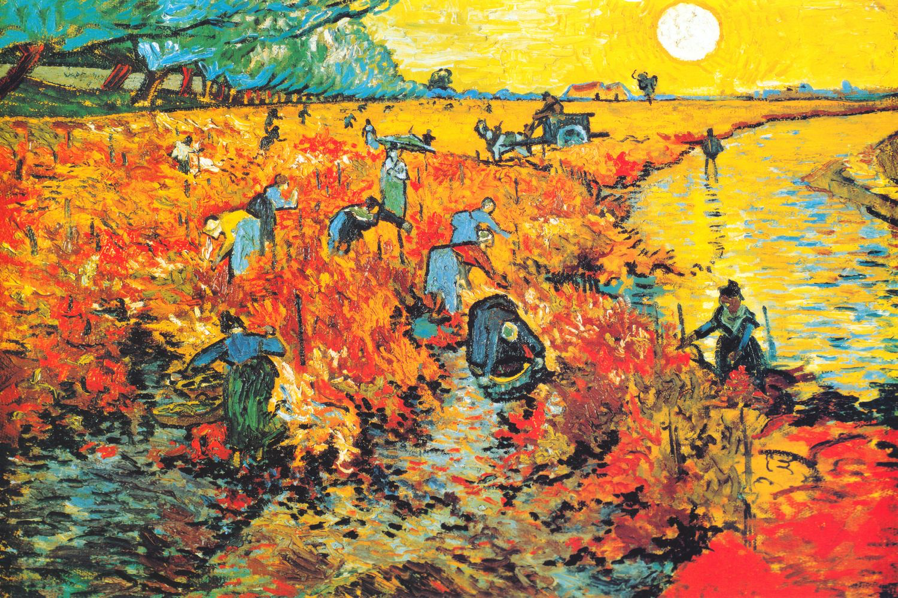 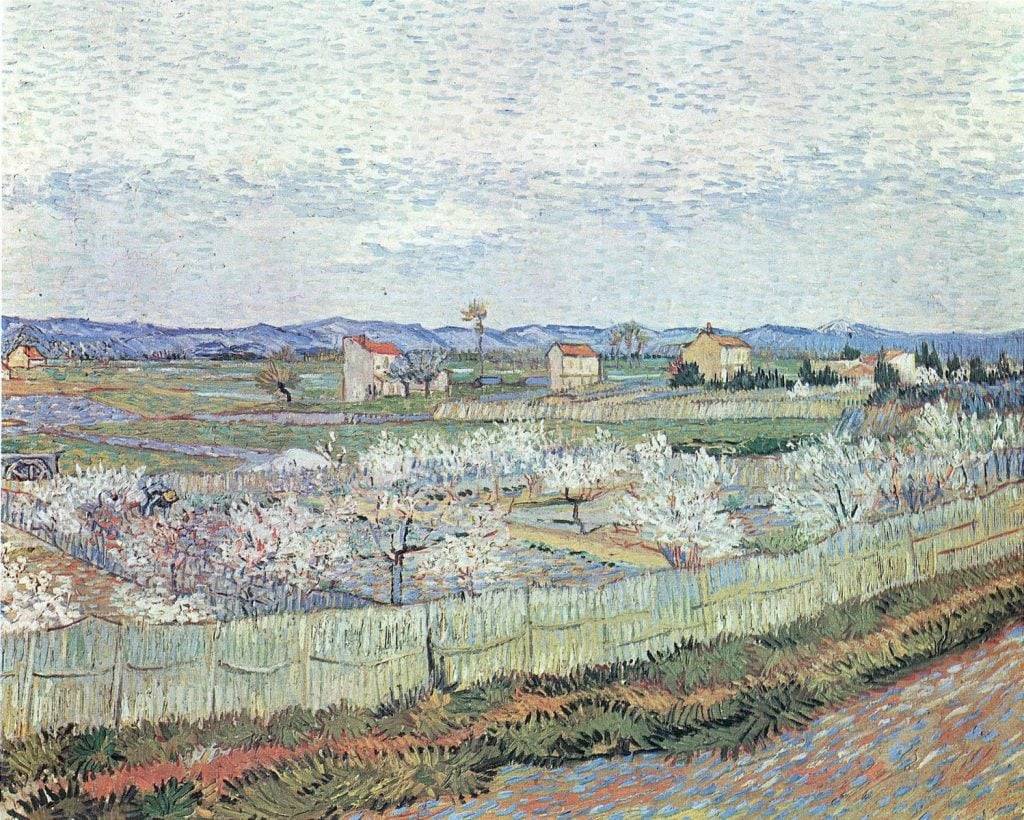 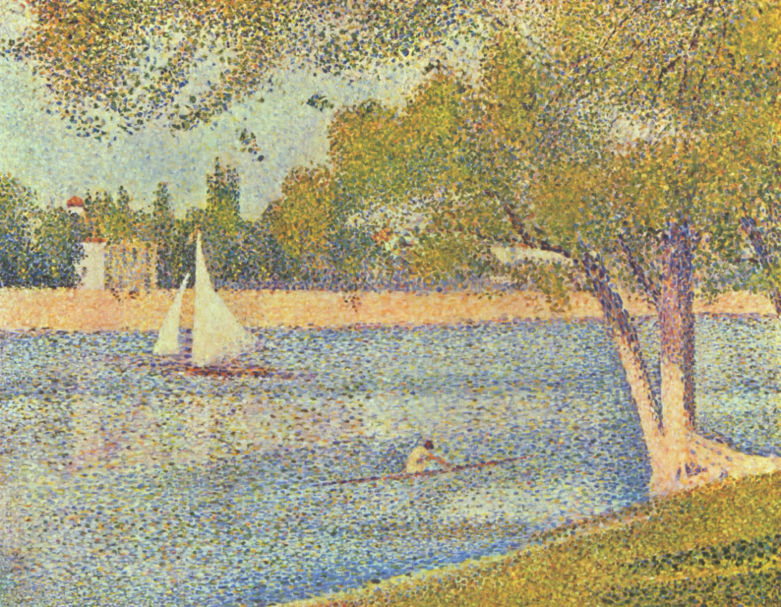 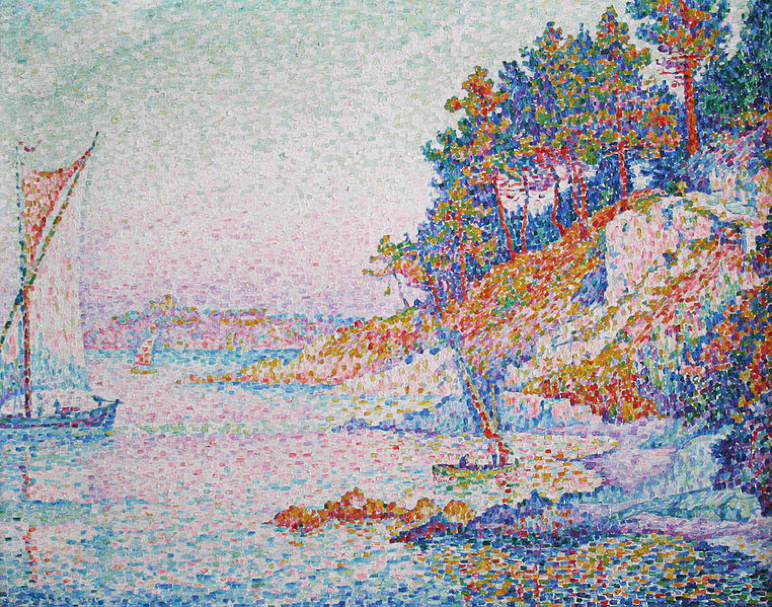 The red wine at Montmajour

According to legend, this is the only painting Van Gogh sold during his lifetime.

Plain of the Crau with peach trees in bloom

One of Van Gogh’s paintings owned by Anna Boch.

The Seine at la Grande Jatte

A Neo-Impressionist masterpiece which can be seen at the Royal Museum of Fine Arts of Belgium, Brussels.

Another Neo-Impressionist masterpiece on display at the Royal Museum of Fine Arts of Belgium, Brussels.

4. She had a strong connection with the ceramic industry

Her father was one of the founders of the Boch earthenware factory. Occasionally she made unique creations on a ceramic support and some of these pieces were displayed at the Les XX’s exhibitions. Moreover, she introduced two important artists to the family business. The first, Alfred William Finch, was one of the founding members of Les XX. He later became a well-known designer in Finland. The second, Charles Catteau, had an important influence on the evolution of the company’s style. As a result, he received a prize at the Paris Decorative Arts Exhibition in 1925. Two years later, Anna Boch organized an exhibition of her paintings and Catteau’s creations at her home. 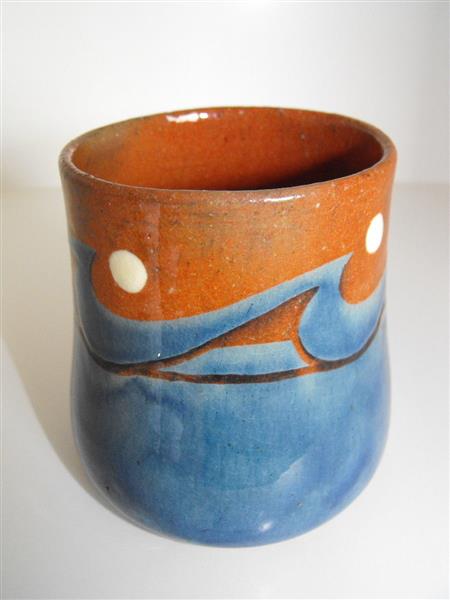 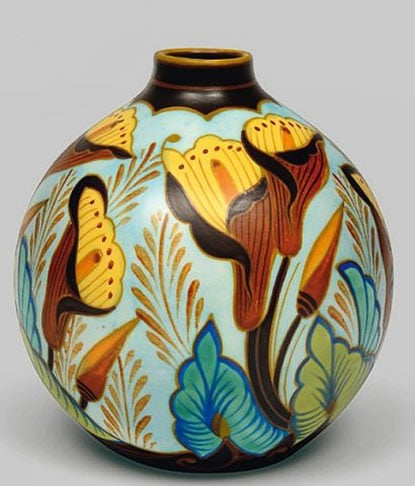 One of Anna Boch’s collaborations with her father’s company.

Cup with wave and moon

A work from Alfred William Finch, one of the founding member of Les XX.

5. She supported the Art Nouveau movement

Boch hired Victor Horta early in his career and he went on to become internationally renowned for his distinctive Art Nouveau style. For her, Victor Horta transformed a building. As usual, he worked on the smallest details, carefully selecting craftsmen to make the furnishings and hardware according to his designs. Soon after, we don’t know why, she moved to another house. Some of Victor Horta’s designs were imported to her new residence including a staircase and a fireplace. Boch placed the former in her reception room and the latter in her living room next to paintings from her collection. (Note that in the first picture, to the left of the fireplace, we can see her Gauguin’s painting Le Pouldu.) 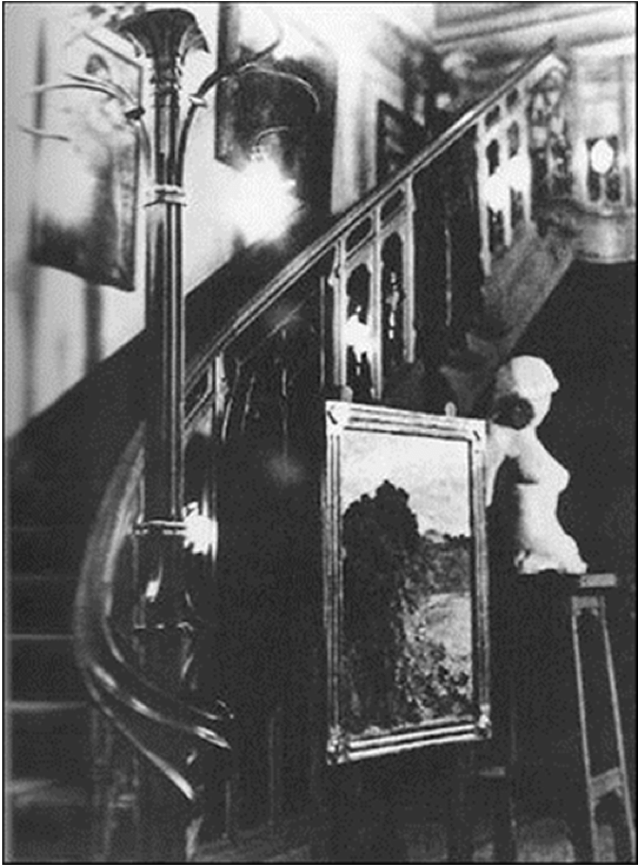 Anna Boch, sitting next to her fireplace designed by Victor Horta.

She had a car! This was definitely not common at the beginning of the 20th century, and even less so for a woman. Therefore she traveled a lot, creating many opportunities to paint landscapes. She obviously had a driver, and you know what? She even taught him to paint!