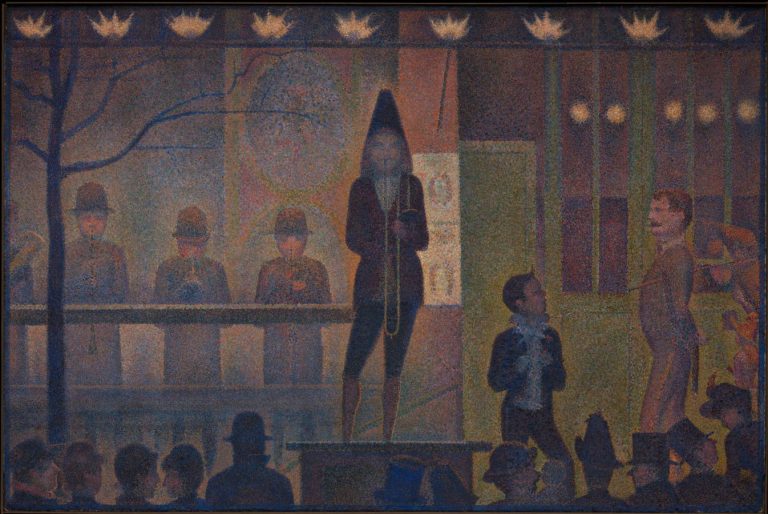 Roll up, Roll up, for the Greatest Show on Earth! Jeanne Mount and Her Circus Mosaics

George Seurat, like many 19th century artists, loved the circus. In particular, he enjoyed watching the tumbling acrobats in bright costumes, a subject infused with drama and dynamism. Circuses were immensely popular in Paris. Indeed, due to growing demand, there were five permanent circuses there. And of additional interest is the fact that Seurat depicted circus scenes using his unique post-impressionist technique called pointillism.

The Post-impressionists are varied group of artists with one thing in common: they all had artistic objections when it came to Impressionism. However, each one tried to resolve their objections by offering something new on the creative table.

Seurat loved color but not the spontaneous handling of it by the likes of Monet and others. Instead, he thought that structure was important and so he experimented with Pointillism, the child of color and structure.

Inspired by the theories of French chemist Michel Eugène Chevreul, Seurat used the phenomenon of optical mixing to bring something new to the art world. According to Chevreul’s theory, when viewed from a distance, dots of different colors placed side by side mix in the eye to create a new one. In fact, Pointillism literally means ‘painting by dots’. Seurat thought that this technique made colors look brighter.

Circus sideshows were held outside the main circus scene to entice passersby into purchasing tickets. Here we have the first nighttime scene by Seurat, a study in pointillism and artificial light.

On the right we see the ringmaster with his meticulously pointed mustache announcing the program for the show while in the middle a band is playing. Next, one of the players is wearing a weird conical hat. Behind the ringmaster customers are lining up to buy their tickets. In front of the stage, mostly in silhouette we see a group of onlookers. Finally, from above, gas lights illuminate the whole scene and the myriads of little purple dots placed on the canvas create an authentic feeling.

Mesmerized by the sideshow outside, we have bought our tickets and now we are inside the main tent. On the stage the acrobats are taking leaps from a moving horse and the clown looks up in amazement. Significantly, the inspiration for this came from a real-life act in a circus in Paris.

The chaos of the stage is juxtaposed with the rigid and geometric space of the audience. In addition, Seurat was careful to record the different social classes. Looking up, we see working class men as indicated by their cloth hats. We note that the seats closer to the stage have been reserved for the upper classes. They even have red pillows to support their backs.

An orange glow envelops the canvas imitating the illumination of electric lights inside the tent. The colors used are mostly primary, red, blue, and yellow. They shine brighter when placed next to dots of white thus creating a joyful atmosphere.

This was Seurat’s last painting. It was exhibited in 1891 in the Salon des Indépendants, just days before he died of diphtheria.