Everything You Must Know About Pont-Aven School 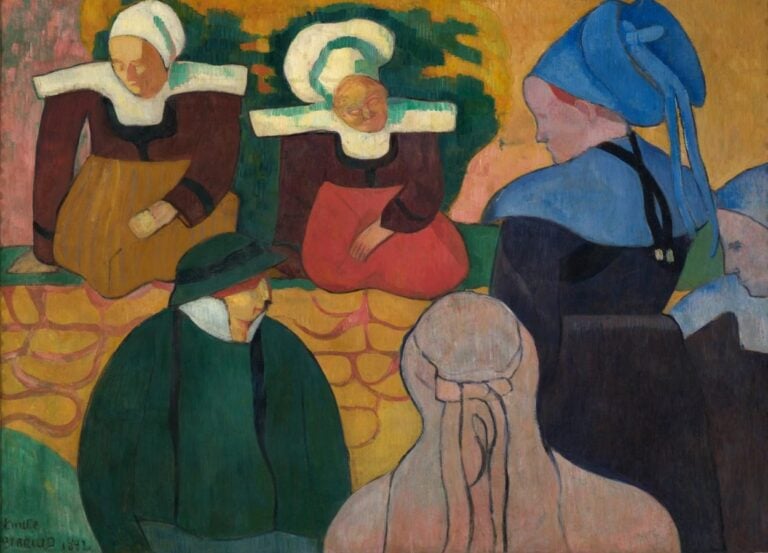 The year 1886 was a turning point for Paul Gauguin's career as a painter. That was the year when the village of Pont-Aven in Brittany, France, became the centre of a vibrant international artists’ colony. In the late 1880s and early 1890s, it attracted painters from all over Europe and North America. Why was this tiny village such an important place for art history?

The destination of Pont-Aven as a place perfect for artists begun in 1862 when the railway line from Paris to Quimper was first opened. It was ideal for anyone wanting to spend their summers away from the city in a picturesque place not yet spoilt by tourism and not pay an awful lot. What's interesting, the first group of artists that arrived at Pont-Aven consisted of American art students from Philadelphia. Jean-Léon Gérôme, one of the leading French Academic painters, encouraged his American students to go there to learn what the French landscape looked like. [caption id="attachment_15987" align="alignnone" width="1000"] 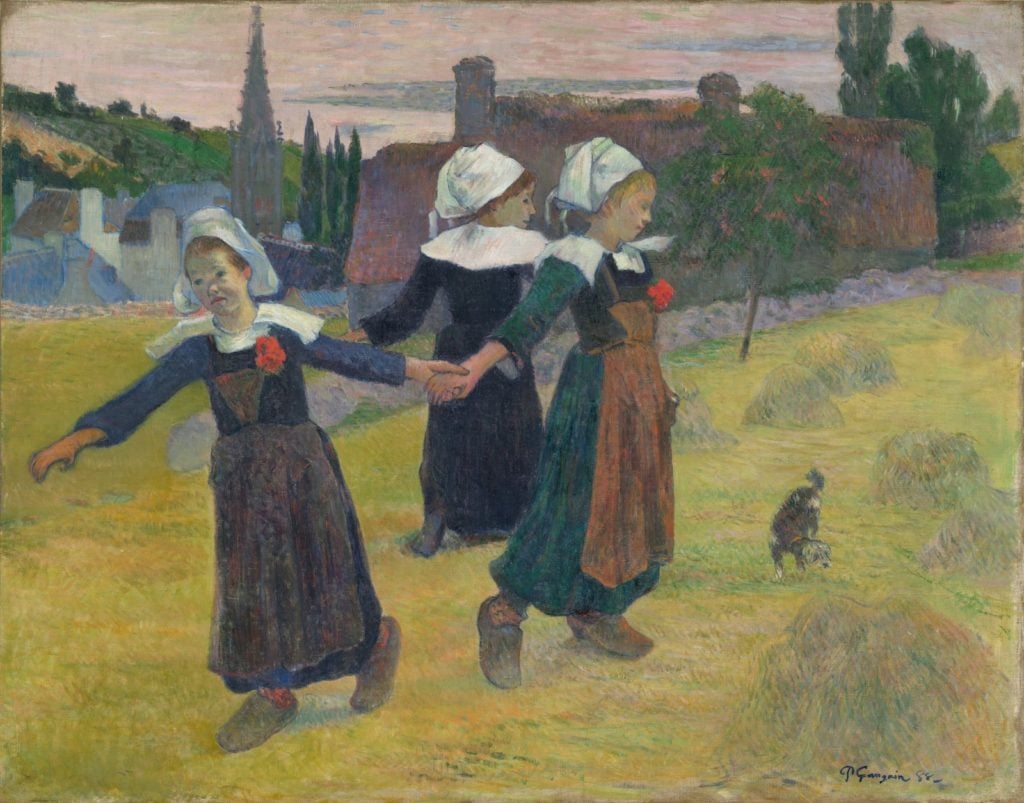 Paul Gauguin, Breton Girls Dancing, Pont-Aven, 1888, oil on canvas, National Gallery of Art, Washington[/caption] Paul Gauguin's attention to Pont-Aven was probably caught when he saw one of the most popular guide-books of the time, Henry Blackburn's Breton Folk: An Artistic Tour of Brittany illustrated by Randolph Caldecott. His naive illustrations caught the imagination of the avant-garde and Gauguin even copied Caldecott's style in his drawings during his first summer stay at Pont-Aven. [caption id="attachment_15990" align="aligncenter" width="850"] 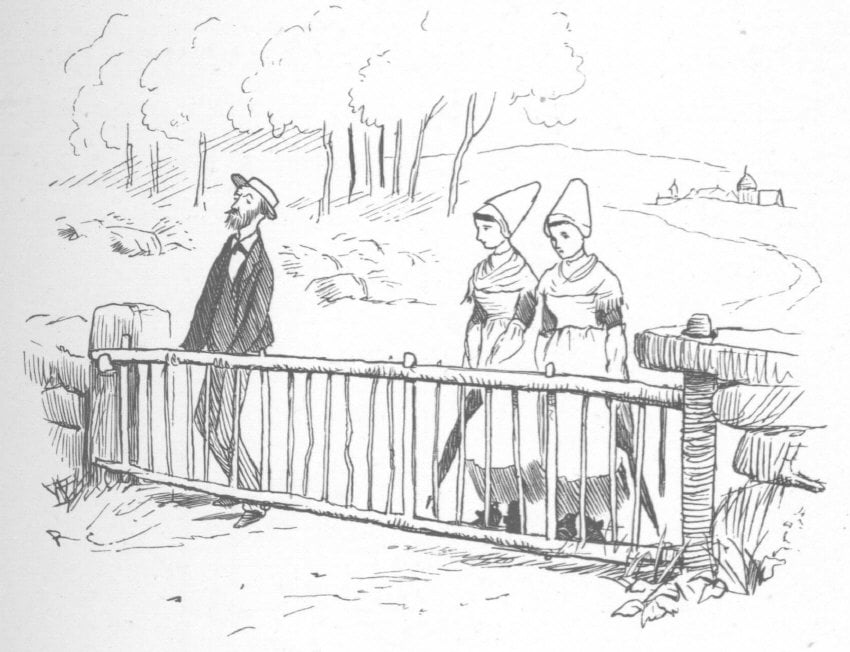 Breton Folk: An Artistic Tour of Brittany illustrated by Randolph Caldecott (from Preface).[/caption] Gauguin first worked in Pont-Aven in 1886 and he loved the place. However, when he returned in 1888 Pont-Aven, he found it already too crowded. The artist looked for an alternative place to work which he found in 1889 in Le Pouldu, some miles off to the East. [caption id="attachment_15981" align="alignnone" width="1000"] 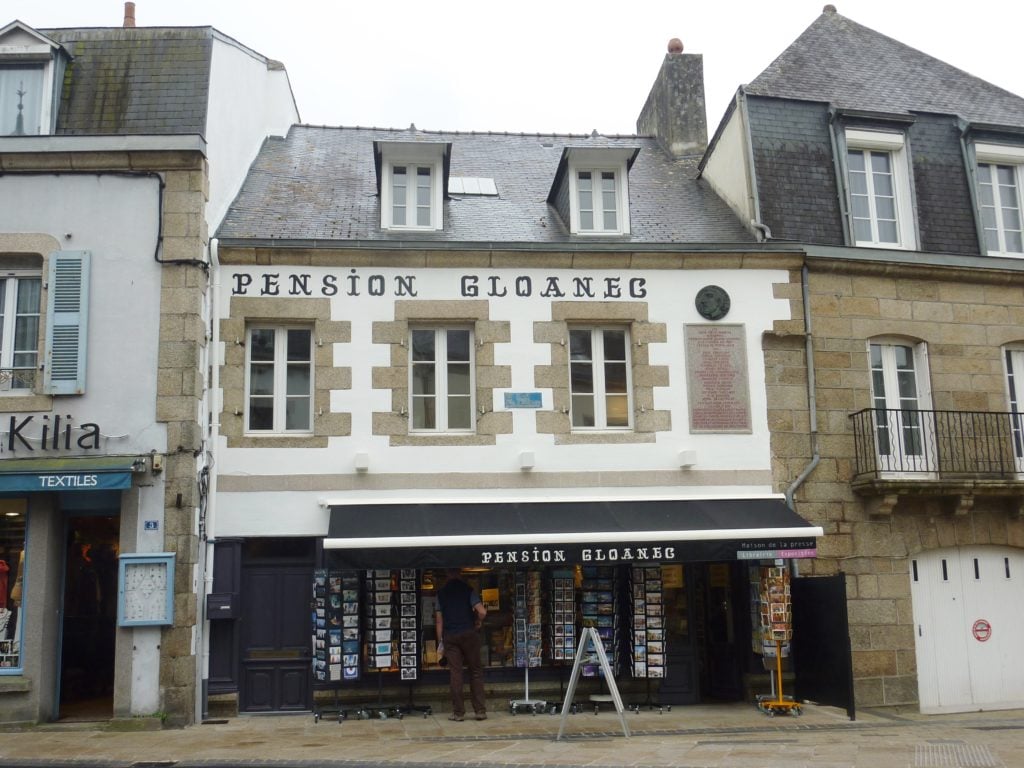 Pont-Aven today, Paul Gauguin's place to live, La Pension Gloanec. Photo: Moreau.henri[/caption] Brittany was a fascinating place for the artists fed up with the French capital - with its language, traditional dress, fervent Catholic belief, an oral tradition and the ubiquitous presence of granite crosses and churches, it was so different from the metropolis: it was savage. As Gauguin wrote to his friend Émile Schuffenecker in 1888:

I love Brittany. I find a certain wildness and primitiveness here. When my clogs resound on this granite soil, I hear the dull, matt, powerful tone I seek in my painting. [caption id="attachment_15983" align="alignnone" width="800"] 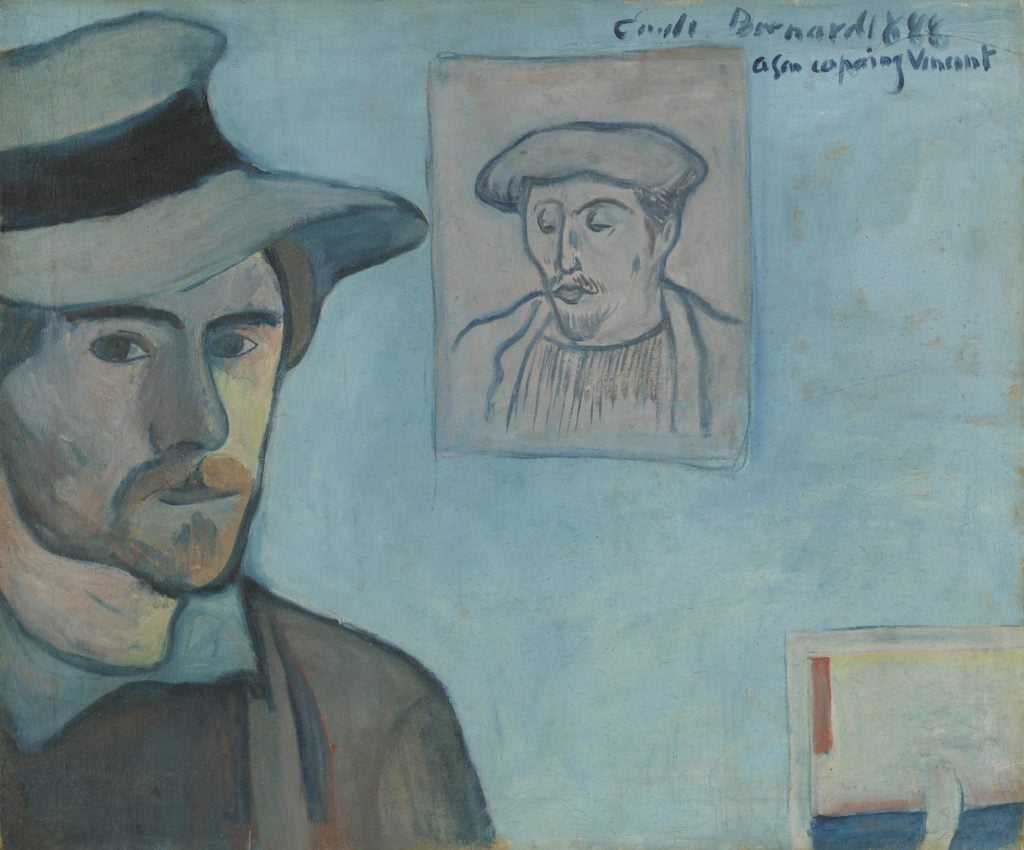 Émile Bernard, Self-Portrait with Portrait of Gauguin, 1888, Van Gogh Museum, Amsterdam[/caption] The second most innovative painter to arrive at the informal Pont-Aven school was Émile Bernard who became friends with Gauguin. While Gauguin visited the colony in 1886, 1888, 1889-90, and finally in 1894, Bernardwas there in 1886, 1888, and 1891-93. Bernard showed Gauguin his Pardon à Pont-Aven (1888) which, as some believe, inspired Gauguin to paint his Vision du Sermon. What's also important, later Bernard claimed that he was the first to adopt this distinctive approach which became known as Synthetism. [caption id="attachment_15984" align="aligncenter" width="639"]

Émile Bernard, Breton Women in the Meadow (Le Pardon de Pont-Aven), 1888, private collection and Paul Gauguin, Vision After the Sermon, 1888, Scottish National Gallery.[/caption] Other artists who stayed with Gauguin, first at the Pension Gloanec in Pont-Aven and later at the Buvette de la Plage in Le Pouldu, were Charles Filiger, Meijer de Haan, Charles Laval, Robert Bevan, Roderic O'Conor, Émile Schuffenecker, Armand Séguin and Władysław Ślewiński. After his first voyage to Tahiti in 1891, Gauguin returned to Pont-Aven for the last time in 1894, once again staying with his circle of friends at the Pension Gloanec. 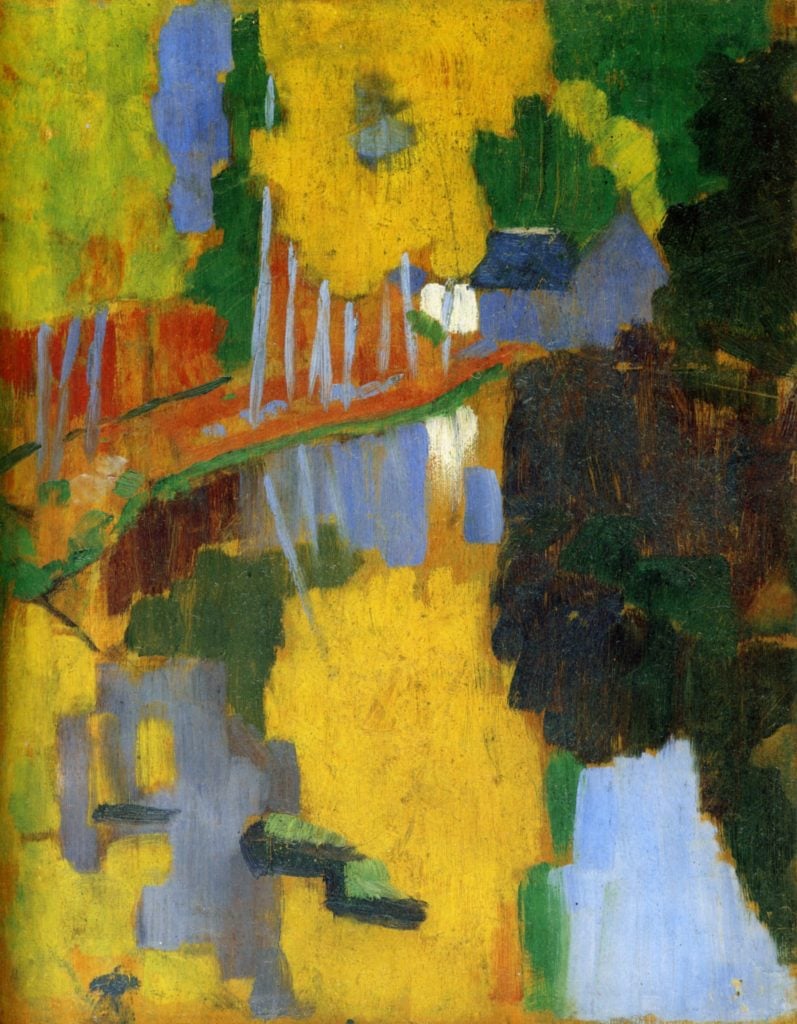 Paul Sérusier, The Talisman, 1888, Musée d'Orsay[/caption] The Talisman was painted by Paul Sérusier under the direct guidance of Gauguin. He ordered Sérusier not only to paint the landscape from memory but to be certain to paint the different-coloured areas as intensely as possible. Synthetism stayed in opposition to Impressionism and it was based on the idea of synthesis. It relied on a number of principles including the abandonment of faithful representation; the creation of a work based on the artist's memory of the subject but reflecting his feelings while painting; bold application of pure colour, the absence of perspective and shading, and the geometrical composition free of any unnecessary details and trimmings. [caption id="attachment_15989" align="alignnone" width="1000"] 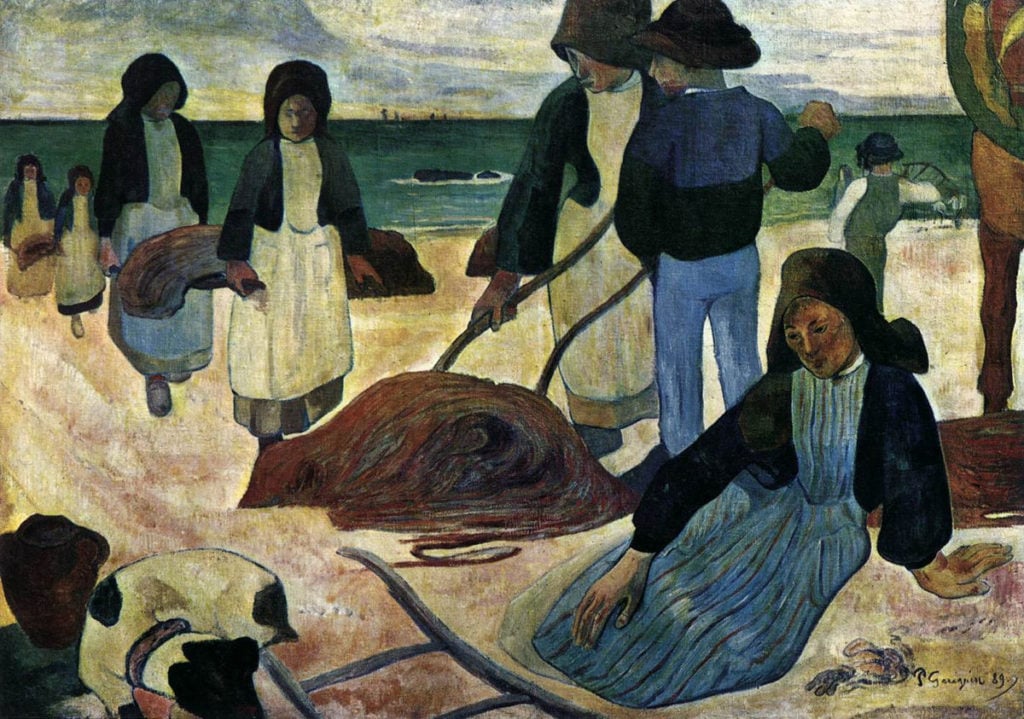 Paul Gauguin, The Seaweed Harvesters, 1889, Museum Folkwang, Essen[/caption] In their Breton landscapes, Gauguin and Bernard employed bright areas of colour surrounded with heavy, dark outlines that give the painted surface the appearance of medieval enamel and stained-glass work. The content of their paintings often derived from the everyday life of the Breton people. Upon the return of the Pont-Aven school to Paris in the fall of 1888, the members met regularly to discuss new developments in French art, particularly Symbolism. In 1889 Gauguin arranged an important exhibition of Impressionist and Synthetist art that featured his own and others’ works. The activity of the group ended when Gauguin went to Haiti. Yet this is a completely different story.