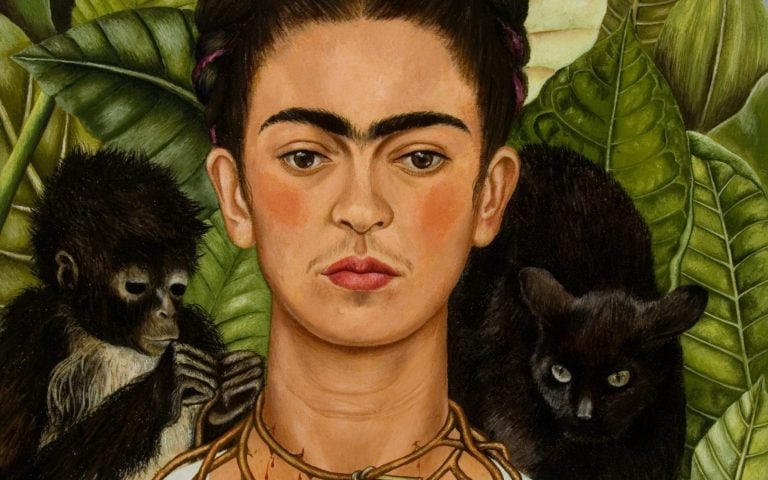 Within arts, cats can have a symbolic meaning, and depending on the period of time, that meaning may vary. Their nocturnal habits gave them a negative connotation during the Medieval era, and later, the Dutch saw them as an allegory for indolence, just lazy balls of fur. However, sometimes a cat is just a cat: present to be a snuggly companion and the occasional judgmental roommate. The scenes below show women with cats in art. Some may be symbolic, some not, but they are almost all relatable.

Popular culture has given us the “crazy cat lady” stereotype – think Eleanor Abernathy from The Simpsons, Arabella Figg from the Harry Potter series, or Aunt Gayle from Bob’s Burgers (admittedly, my Halloween costume a few years ago). For whatever reason, women in particular seem more drawn to cats. And cats, unlike dogs that love universally no matter what, are a little more temperamental and indifferent. Despite that, we still adore them and hope they feel the same about us.

1. Medieval Nun with a Cat

Here we have a 14th century nun with her kitten. Illuminated manuscripts offer all kinds of fun creatures and critters in the marginalia that sometimes pertain to the text and sometimes not. At an abbey, cats are helpful to have around to keep the pests away but also for companionship in such a reserved environment.

In the 14th century Maastricht Book of Hours housed in the British Library, a nun spins thread as a cat plays with a spindle at her feet; this is a theme any knitter or crocheter knows well. Though it also looks like the cat is handing the spindle to the nun’s outstretched hand and with medieval marginalia, it is completely possible! The British Library has digitized the complete work and it is available to view here. You can see the rich colors have survived through the centuries for yourself.

In this full-length Japanese woodcut, a woman snuggles a cat to her shoulder. The smile she has on her face is one cat-lovers know well, when a cat decides to be sweet and accepts their human’s affection. The artist, Keisai Eisen (also known as Ikeda Eisen), was known for his many works of bijin-ga (images of beautiful women). Click here to learn more about Ukiyo-e, Japanese art produced between the 17th and 19th centuries.

3. Girls with an (Unhappy) Cat

In this Dutch interior scene, two young girls are enjoying their kitten, although I’m not sure how much the cat appreciates the attention. The artist, Dircke Hals, lived and worked during the Dutch Golden Age. His contemporaries included superstars such as Rembrandt, Judith Leyster, Frans Hals, and Vermeer. Genre scenes like these were popular among the growing middle class in the Dutch Republic.

4. Courtesan with a Cat

One of the most famous (infamous?) women with her cat: nude Olympia lays on her bed and stares at the viewer. With this painting, Manet deviated from the “traditional nude” and introduced a woman who was more in control of her fate than her predecessors. She was also roundly hated by critics for straying so far away from the prescribed formula.

Olympia’s feline companion is a play on Titian’s Venus of Urbino. Instead of a sleeping pup, at the end of her bed is a cat which has a couple of meanings, including Olympia’s alleged promiscuity. But is the cat frightened or is she stretching? Regardless, she probably isn’t thrilled about being disturbed.

Renoir’s pastel color palette and sparse background underscore this quiet moment as a sleepy woman relaxes with her equally-sleepy cat. She is too tired to even adjust her strap and I think that is something to which we can all relate. She holds the cat’s paw which flops in her hand as the other paw rests on her arm. This is an exhausted duo.

6. Rousseau’s Woman with a Cat

The woman in this portrait stands in a refreshing landscape as a cat plays at her feet. Rousseau’s self-taught style is uniquely his own and easily identifiable. The flat figure is not quite contained in the landscape that surrounds her. She also seems disproportionately large compared to her tiny kitten that plays with the requisite ball of yarn. Though the woman is unknown, her cat is adorable and sweet.

Léger produced several variations, in oils and sketches, of women with cats. This Modernist take shows a faceless woman who appears to calmly read as her cat sits in her lap. With its conical and elongated features, what the critics called “tubism” (a play on Cubism), the figure bears a resemblance to an artist’s mannequin with a clinical elegance.

8. Contemplation with a Cat

Gwen John used this model a few times, though her name was never recorded – actually, the same model, the same dress, and the same window. John painted variations of this same scene, sometimes with only very slight differences. The cat and woman have similar postures as they stare away from us, lost in their own thoughts.

9. Self-Portrait with a Cat

This well-known self-portrait of Frida Kahlo shows a monkey on her left shoulder, a hummingbird at center with thorn necklace, and cat on her right shoulder. Kahlo completed numerous self-portraits, each one rich with symbolism. She also often included her many pets in her paintings. Thankfully there are also numerous photographs of Kahlo, her family, and friends and we often see all kinds of animals, including cats, running around.

10. Woman Sewing with a Gorey Cat

We have an appearance here of Rum Tum Tugger from T.S. Eliot’s Old Possum’s Book of Practical Cats, this version illustrated by Edward Gorey. The angelical cat leaps towards its owner as she patiently works on her sewing. Gorey’s whimsical drawings are immediately recognizable. The artist wrote and illustrated over 100 works, as well as illustrated for numerous other authors.

Gorey was an animal lover (particularly of cats!) who, in his will, ensured financial contributions to a large range of animal welfare societies. As The Gorey House website states, “he established for the welfare of all living creatures including not only cats, dogs, whales and birds, but also bats, insects, and even invertebrates.”

Just as a fun bonus, here is a picture of the author’s cats who do not care much about art: Ida and Rhoda.

I like cats and I’m sure that many of you do too. A fascinating animal, the cat has earned itself an important place in culture, literature,...