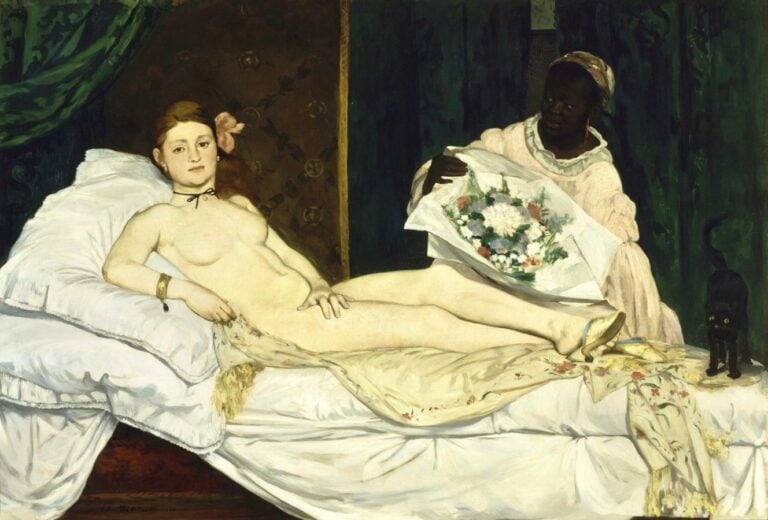 When French artist Edouard Manet finished his well -known painting “Olympia” in 1863, lot changed in the history of art because of his technique and the fresh look he brought into art world. His image of reclining nude was a novel concept in the times that Titian and Goya already done similar things in different style. However, Manet has lot to say with his different reclining nude offers something special for the artists in after him.

Manet and his very traditional subject matter affected the generation after him because he combined something very common with a different technique, which is basically reduced modeling and swallow pictorial space. Therefore, Manet, reject to practice on his paintings as academic approach suggests so.

It’s not only Manet changed the traditional artistic approach before him but he also bring a fresh look to academy in terms of the subject matter and the context of the painting. Before Olympia, academic approach to reclining nude is to create a subject matter from a goddess, odalisque or a beautiful woman. When Olympia exhibited in Official Salon it was the most criticized painting because of the subject matter and other successful ones were the mythological topics like the Birth of Venus (1863) or orientalist approaches similar to Odalisque with a Slave (1842).

Manet changed this view and gave a place to a contemporary prostitute in his painting. In his time, prostitution was common and he wanted to bring the topic to art. So he updated his art with a modern subject matter and also used art historical tradition to convey his message.

Different approaches in art practiced after Olympia to break cultural and technical issues similar to Venus of Urbino.

Here are some of the different representations of the reclining nude concept in art history:

1. Jean Auguste Dominique Ingres, Odalisque with a Slave, 1842 (Before Olympia)