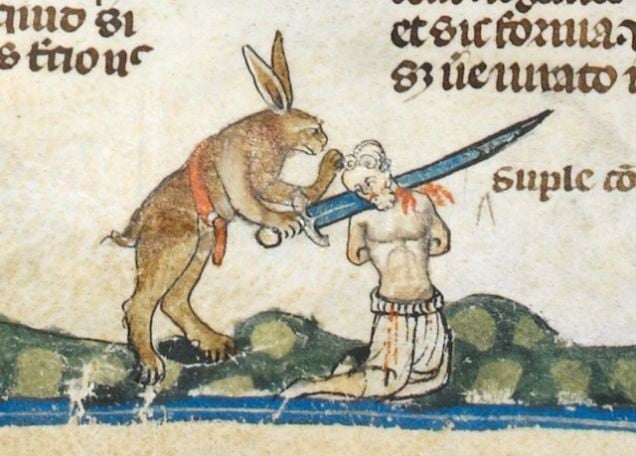 If you’ve ever watched Monty Python and the Holy Grail, you probably remember the scene when the vicious killer bunny (which, as we remember, is a DYNAMITE!) attacks King Arthur and the knights. And as it may look random, ridiculous, and surreal like many other scenes by Monty Pythons’, it actually has some roots in the dark, mysterious history of medieval manuscripts. So, ladies and gentlemen, here we present to you: the killer rabbits. And I must warn you – there will be blood.

Before around 1440, when the goldsmith Johannes Gutenberg invented the publishing press, the books were copied by hand. In Middle Ages, this hard work was done by the army of monks living in monasteries. Some of these books were also illuminated – meaning they had some additional illustrations or drawings. Some of these books were also having so-called marginalia – the marks made in the margins where we can find quite particular images of monsters, beasts, animals, obscene images of human-animal hybrids, and of course, human genitals. These types of funny marginalia are known as the drolleries, and they became most popular from 1250 to the 15th century.

In medieval times, rabbits were usually seen as symbols of purity and helplessness. This is why we can often find them on the scenes with the Holy Family or Christ, like here on Dürer’s etching. But in the drolleries, they have shown their true nature – cruel, sadistic, and violent animals. They killed people and other animals, often in a very sophisticated way. They had some serious armory and fought some severe battles. You wouldn’t like to meet a bunny like this ever in your lifetime. It would probably gnaw your arteries, skin you, or at least hang you and tell you not to scream while dying.

The world in the drolleries was the upside-down world. During the Middle Ages and the Renaissance, the culture of laughter was trying to make the regular world full of mysticism, dogmatism, and seriousness more bearable. Remember that we are talking about a very inflexible society full of social barriers. Carnival celebrations and jokes by dramatizing the comic and relative side of absolute truths and supreme authorities highlighted the ambivalence of reality, coming to represent the power of both absolute liberty and farce.

In 1929 the Russian philosopher and literary critic Mikhail Bakhtin coined the term “carnivalesque,” which is a literary mode that subverts and liberates the assumptions of the dominant style or atmosphere through humor and chaos. For Bakhtin, “carnival” (the totality of popular festivities, rituals, and other carnival forms) is deeply rooted in the human psyche on both the collective and individual levels. Vicious rabbits from the margins of very important and serious books are perfect examples of cultural subversion like this.

No surprise that the French star of medieval monasticism, the Cistercian Bernard of Clairvaux, described those in the Decretals as “ridiculous monstrosities,” and he also wrote that “Even if the foolishness of it all occasion no shame, at least one might balk at the expense.”

So then you can treat the killer rabbits simply as a medieval joke or a mirror of the then-culture. But, of course, a much less scientific way of thinking about it, but very compelling – it may also be seen as the imaginary revenge of medieval vegetarians and fans of fluffy and cute animals on the cruel medieval man eaters. Because you know what the situation was in real-life – who was the hunter and who was hunted. Good that we have books!