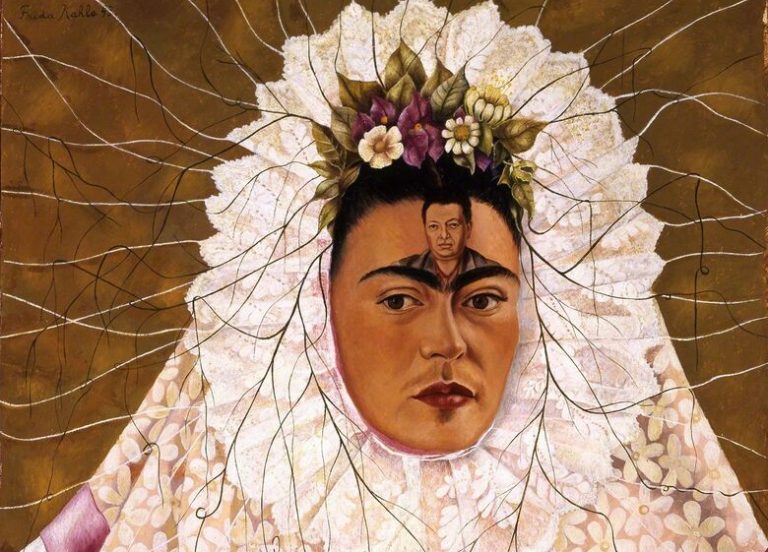 Frida Kahlo, who lived during the first half of the 20th century changed art history. She put her own dreams into her work. She had many ups and downs in her life as she survived a bus accident and also many love affairs that she expressed in an open manner. She used Christian symbolism merging with her own dreams that she described as her reality.

After periods of depression and miscarriages in her life she surrounded herself with animals. She liked to use animals as models in her artworks. Her paintings are domesticated by monkeys, hummingbirds, dogs, and cats. One of her self-portraits depicts her with four spider monkeys. The animals became protective and tender symbols to Kahlo. On the contrary, Mexican mythology suggests monkeys are symbols of lust.

One of Frida Kahlo’s most significant self-portrait was Self-Portrait with Thorn Necklace and Hummingbird. According to some art historians, Kahlo wanted to show that she had been resurrected and had started a new life with this painting. As a symbol of this idea, the hummingbird was placed in her necklace. The hummingbird symbolizes hope and good luck in Mexican culture. However, the audience may notice the black cat – known as a symbol of bad luck – taking its place behind the right shoulder of Kahlo. Different interpretations say that the hummingbird pendant refers to Huitzilopochtli. It is an Aztec god of war and may refer to the pain Kahlo suffered all her life internally.

Other important symbols of the painting were butterflies and the thorn necklace. Butterflies symbolize resurrection and it may refer to her rebirth in life after the accident. Furthermore, the thorn necklace she wears may be the symbol of Jesus’ crown of thorns, which he bore while being dragged to his crucifixion.

In addition to these symbols, Kahlo created a painting that uses both Christianity and animal symbolism in one subject matter. The Little Deer depicts her as a deer with a human face. The artist portrayed herself in this painting. However, there is a much more important detail in this artwork – the deer wounded by the arrows reminds us of Andrea Mantegna’s depiction of Saint Sebastian from 1480. It may also be a reference to crucifixion and resurrection.

Kahlo’s strong character can be seen not only in her intriguing paintings, which are directly linked to her life but also in her famous colorful clothing.