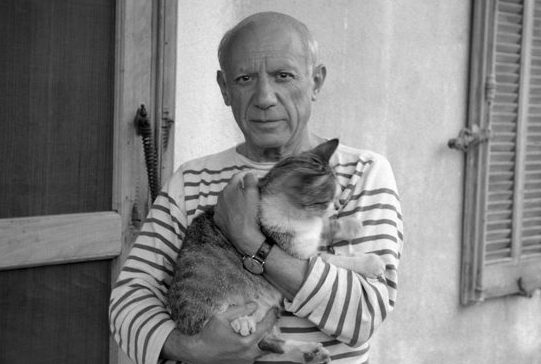 So many great artists have shared one very special love: the love of cats. Here you will find 6 modern artists who loved their felines and have taken photos with them:

In the 1960s Salvador Dalí bought a pet ocelot called Babou, which accompanied him on a leash and a studded collar nearly everywhere he went – including, famously, a restaurant in Manhattan. When a fellow diner became alarmed, he calmly told her that Babou was a normal cat that he had “painted over in an op-art design”.

In the last decade of his life, Henri Matisse suffered from cancer and spent most of his time in bed or in a wheelchair. A number of cats kept him company.

Gustav Klimt called his cat Katze (which stands for “a cat” in German). Though the artist is not known for any artworks of cats, opting instead for female subjects, his love of his Katze is widely known.

Paul Klee’s love for cats started at a young age since they were always a part of his family. Years later, Klee shared his studio with his feline friend, Bimbo, a beautiful white long-haired cat who followed him everywhere. In the memoir Kandinsky and I, Nina Kandinsky remembers Klee’s love for animals.

Paul Klee adores cats. In Dessau, his cat always looked out the window in the studio. I could see him perfectly from my private room. Klee told me the cat looked at me insistently: You can’t have any secrets. My cat will tell me all.

Nina Kandinsky, Kandinsky and I.

Andy Warhol loved cats. In 1954, he published a book of hand-colored lithographs titled 25 Cats Name Sam and One Blue Pussy. According to Warhol’s nephew, who published his own book Uncle Andy’s Cats in 2009, Warhol’s collection of cats began when he feared his single cat named Hester would grow lonely. After bringing home another cat, named Sam, the cat family eventually reached 25 felines, each of whom Warhol gave the same name – Sam.

6. Kandinsky and His Cat, Vaske

Look at the positive feeling of Wassily Kandinsky when he is holding his cat, Vaske!