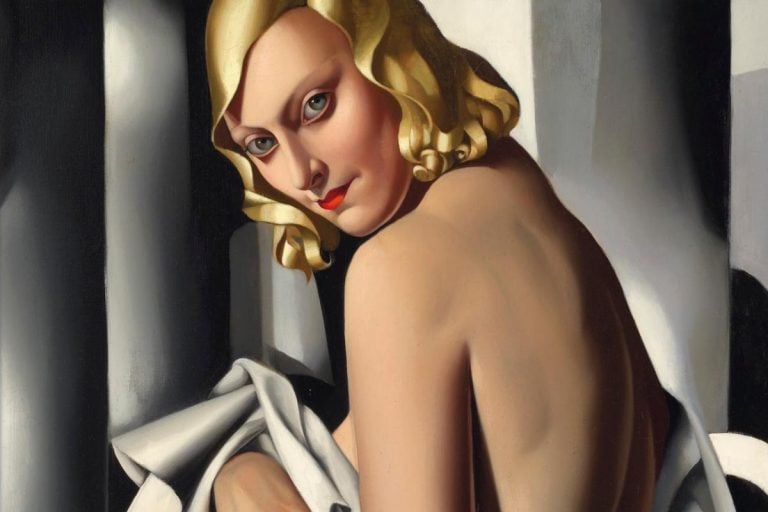 Today I am taking you to a New Year’s Eve party. This year, like every year, we hope that the year coming will be better. But hearing that the twenties are coming somehow the picture of the 1920s comes to our imagination, with glamorous parties, jazz playing in the background, flappers dancing everywhere… However, soon we will see what’s really coming, but first, let’s make a voguish welcome with a short escape with Tamara de Lempicka into the twenties.

First, we should get to know our host, Tamara de Lempicka. She is picking us up in her green Bugatti, wearing a leather helmet and gloves, wrapped in a grey scarf waving in the wind. Tamara is a famous Polish Art Deco painter of the 1920s. Writers, fellow artists, scientists and nobility want to be portrayed by her. Her pale skin with that cold look and lubricious red lips show that she is aware of her position; she is the independent, rich and inaccessible woman and she makes the rules.

Arriving at the party we meet De Lempicka’s cousins, Irene and Ludmilla Declair. They are both wearing loose dresses. Fashion for women in the 1920s was all about getting loose. Daywear had sleeves and straight, pleated, hanky hems or tiered skirts. Day dresses had a drop waist, which was a sash or belt worn low on the waist or hip with a skirt that hung anywhere from the ankle up to the knee, never above. Jewelry was less relevant. Bobbed hair was the most popular style, giving a boyish look. In addition, the twenties was the time when society rejected the corset and Coco Chanel came up with her timeless little black dress. Irene rolls back her eyes in a manner reminiscent of certain Baroque depictions of saints that witness the impact of classic art on De Lempicka’s work.

A Girl with a Guitar

What would be a De Lempicka’s twenties party without music? That’s why there, in the corner of the room, is a girl playing the guitar. She has bobbed hair and wears a blue satin dress. This is one of De Lempicka’s portraits inspired by a traditional motif in fine arts – allegorical representations of the arts. Music is here depicted as a beautiful, elegant, dark-haired woman, preoccupied with creating music. As a matter of fact, the Renaissance works Lempicka saw in museums while traveling through Italy had a great influence on her work. The light blue dress repels the usual, drab palette of early Cubism. Therefore, in De Lempicka’s paintings palettes are limited, but the color rarely faints. The colors she selects are in step with the tastes of the period.

A party is always a good place to find out new stuff, isn’t it? We notice two ladies whispering to each other. They are very fashionable, looking both cute and elegant with their red hats and red lipstick. Besides, cosmetics were associated with prostitution until the twenties. This is also the decade when the role of women in society changes rapidly. For example, women gained the right to vote in most countries. New careers opened for women in offices and schools, with salaries that allowed them to be more independent. A new kind of feminine lifestyle was born – the “flapper”. Flappers had short hair, wore make-up and loose dresses, ankle or knee-length. They danced, drank and smoked.

Now we are going to meet one of the VIPs De Lempicka portrayed. Here is Duchesse de la Salle looking threatening in jackboots, one hand tucked in her pocket. Yes, she is dressed like a man, and no, it wasn’t forbidden then. In the twenties, homosexuality became more visible and somewhat more acceptable. Humor was even used to help make it acceptable. This work offers a new image of the modern woman, with unrelenting self-determination and unapologetic sexuality, contradicting traditional portrayals of women viewed only as sexual objects.

The Men of the Twenties

The second VIP we are meeting at De Lempicka’s twenties party is a real charmer. Marquis d’Afflitto in a confident half-lying pose, donning a suit with a bow tie, looking us with an arrogant gaze below his eyebrows. He looks enormous and frightening with broad shoulders and a triangular torso. A slick sharp man of the city. In the twenties, business suits were the day-to-day attire for men in white-collar jobs. Striped, plaid, or windowpane suits came in dark grey, blue, and brown in the winter and ivory, white, tan, and pastels in the summer. Shirts were white and neckties were essential.

Finally, at de Lempicka’s twenties evening, we meet the super sexy, but very sophisticated guest, Joan Jeffery, fiancee of oilman Rufus T. Bush. This masterpiece was lost for sixty years. Lempicka’s women are modern, sensual and fashionable female figures, composed of characteristic generously modeled plans and forms of Cubism. This contrasts sharply with Cubist compositions. In Cubism subjects and backgrounds seem to be constantly changing and individual components of the overall work are equally important. De Lempicka’s work was often considered decorative art unlike her male colleagues, whose Cubism-inspired work included portraits and genre images. In conclusion, people like it because it is and always will be a fashionable escape into the decadent life of the 1920s elite.