The Lady with the Dog 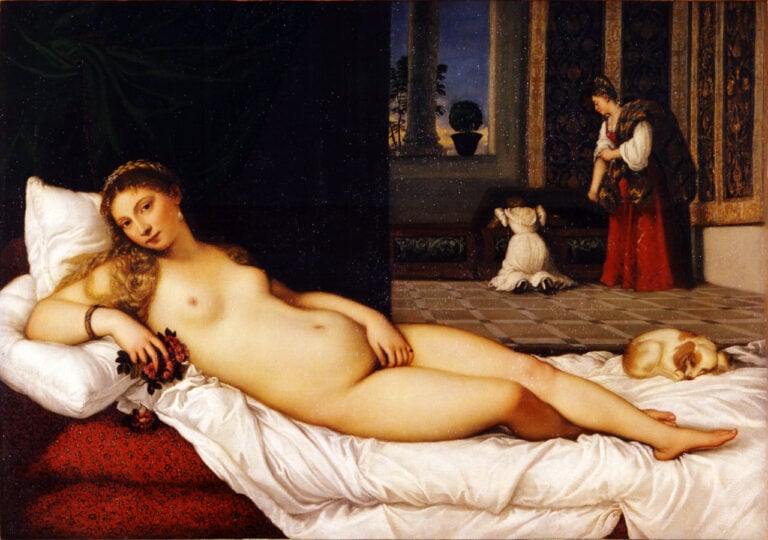 The Lady with the Dog is a title that I borrowed from Chekhov’s short story. It is a story of an affair, however, in art the dog quite often has been a symbol of fidelity. As you will also see below, dogs also have been symbols of status, posed as faithful companions or even as a fashionable accessory.

1. Agnolo Bronzino, Portrait of a Lady with a Lapdog

Here, two pairs of focused and sharp eyes, the lady with the dog, carefully observe us. The lady seems to be looking at us a little ironically, with the slightest of smiles on her lips, while the dog is mistrustful, almost leaning back into the lady’s arm for protection. She is a very self-assured figure. Ascertaining her position is simple with all available attributes: rich jewelry, a beautiful dress made of the richest of materials, the massive chair, and even the dog plays its part.

It is interesting how similar the gaze of the pet is to that of his owner. He is a tiny lapdog of a rich lady, confirming her status but also her fidelity and virtues. The dress is so sumptuous that it almost lives a life of its own, becoming the striking splash of color in this otherwise austere painting.

Conversely, there is nothing austere about this painting. It is typically thought to be ordered by Duke of Urbino, Guidobaldo II Della Rovere, as a gift for his young wife, Giulia Varano. Venus lies on the bed, looking straight at the viewer. Her pose and directness of her gaze create the sensual and erotic tension. On the right side of the painting, where we seem to be getting out of the spell of her eyes, we see a dog and two servants in the background. Some believe that the dog here is the symbol of fidelity, indicating that the women’s direct gaze and sensual body is only for her husband.

We’re sticking with the dog here, as you can see Clarissa Strozzi owned a dog of the same breed as Venus of Urbino (Papillon). However, Clarissa has none of Venus' self-confidence. She wears jewelry that many adult women would envy, but her pose is unstable. Clarissa looks as if she is leaning towards the dog, but at the same time we feel something outside of the frame catching her attention. She is just about to move, and she’ll surely take her small companion with her. The dog just like in Bronzino’s painting seems a bit distrustful, as if it was cringing a bit. Maybe Clarissa pulled its tail on too many times, or maybe it is one of the breed's characteristics.

Madame de Pompadour’s dog is not a happy one either. Clearly something startled him, or maybe he feels overwhelmed by the extremely rich green dress. Madame de Pompadour does not pay him too much attention either, even though we know she loved animals and was usually accompanied by a dog. Boucher depicts it here as if it is just another accessory, a thing to keep the boredom at bay, just like the book she’s holding or the letter on the table. Look at this dress, though, you can completely miss the dog in the dress’s rich waves.

In this case we have a scene that, on one hand, is completely different; a painting of a happy and relaxed family. On the other hand, the pose of Madame Georges Charpentier closely resembles the assured pose of Madame de Pompadour; she also confidently owns the space around her. It is also interesting how the dog creates a counterpoint, an extremely bored or patient one at that, to Mme Charpentier’s dress. The dog here is the friend of the family, its protector and ever patient member.

Here the dog becomes a perfectly matched accessory, for example, just take a look at that collar! Its thin form underlined by the dramatic brushwork creates the basis of Marchesa’s elongated form. The painting is full of movement as if Casati stopped only for a second and is ready to storm off, looking for another adventure at any moment.

And here is some more interesting reading: