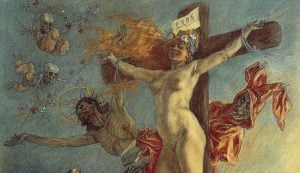 Christianity has brought many popular topics to art over the centuries, yet the interpretation of a religious motif can drastically change depending on the artist and the period. This is especially evident in the 19th century, an era where painters began to experiment with religious stories in subversive and provocative ways. The temptation of St. Anthony particularly awakened the imagination of artists.

Anthony the Great was a 3rd-century Christian hermit who devoted himself to prayer in the solitude of the Egyptian desert. According to the story, the devil was furious at the recluse's sanctity and, as a result, he sent a barrage of ferocious monsters and seductive women to deter Anthony from his holy mission. All these attempts were unsuccessful due to Anthony’s strong faith and devotion to God. This incident came to be known as The Temptation of St. Anthony and it became a popular subject in Christian art as early as the 10th century, notably the scene where the saint was viciously attacked by demons.

Completely nude and with a provocative smile, the woman on the cross is the most striking aspect of the piece. She embodies the prevalent 19th century archetype of the femme fatale, a woman who uses her allure to destroy men. With the devil’s help, she substitutes Christ as the object of worship and replaces the word INRI with EROS. This is a significant alteration to the story of St. Anthony, since the source of desire is not beside Christ on the cross as in other adaptations but in the place of Christ himself.

Anthony and his Pig

Rops maintained some of the iconography associated with St. Anthony, such as ragged clothing, a long beard, books, and the pig. In particular, the pig was a symbol of Anthony’s kindness after he healed it. In Rops’ version, the pig stands on a pile of books while being distracted by the woman. This is not the first time Rops shows a woman and a pig together, Pornocrates depicts a blindfolded woman holding a pig on a leash. The woman is the one in control, while the pig, symbolizing man, is under her control. With this in mind, the pig who was representative of the hermit’s kindness is now a symbol of the femme fatale’s power over him.

The Abstinence of Joseph

On the prayer desk, we see Anthony’s latest reading: The Abstinence of Joseph. The title on the page refers to the Old Testament story of Joseph and Potiphar’s wife, which tells the incident where the wife of one of the Pharaoh’s guards tried and failed to seduce Joseph. The figures on the page even parallel paintings of Joseph and Potiphar’s wife, another favorite subject of artists. The reference to this story serves as a reminder of the importance of abstinence for Anthony, yet it could also hint at how the obsession with chastity is what strengthens lustful thoughts.

The skeletal cupid-like creatures or putti who hover over the left side of the piece are a far cry from the adorable winged children popular in art. Though putti have occasionally appeared in other adaptations of the Temptation, Rops is the first to give them a macabre appearance. By
transforming symbols associated with love into skeletons, the concepts of Eros and Thanatos are combined. Next to the femme fatale, these putti indicate that lust is both alluring and deadly.

“[Rops] seemed to know that the repressed thought returns at the very moment of its repression…”.

Triana del Mar is an undergraduate Art History student living near Philadelphia with a particular interest in 19th century art as well as religious and mythological paintings. Other interests include drawing, animation, and graphic novels.

When I was writing the article about the Nabis, I came across the past Tate exhibition on Pierre Bonnard which closed in May 2019. Let’s...