Psychological Truth on the Verge of Modernity: Symbolism in Victorian Art 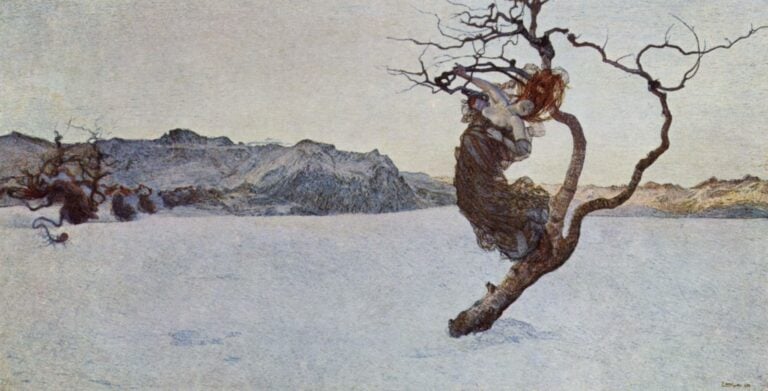 Symbolism in the late 19th century came out of the romantic movement and explored the meanings of forms, lines, shapes, and color. It drew on literary genres such as mythology and subjects such as dreams and nightmares, religion, life, and death. It was thought that it was a reaction against the advancement of science and technology; a reminder that there may be other forces in the world other than those explained by science. Two paintings by artists with an Italian connection epitomize how Symbolism in Victorian art could be used to discuss morality in its different guises.

Evil Mothers (1894), by the Italian artist, Giovanni Segantini, is an excellent example of the way form, color, and subject matter combined in a spiritual way.

Abandoned by his own mother, Segantini had a difficult relationship with women. This was due to his insistence that a woman’s role was as wife and mother. His belief that a woman who did not fulfil these roles was inadequate fed into much of his art work. Segantini favored cold, barren, alpine landscapes, revealing a coldness in his own outlook.

The title, Evil Mothers, was allegedly taken from a poem by a 12th-century monk which had been translated into Italian by Segantini’s friend, Luigi Illica. The poem described women who refused to partake in marriage and motherhood. It is clear that Segantini was using this symbol to criticize those who behaved in an “unnatural way”. The irony here is that Segantini never married the mother of his children. As a child, Segantini’s half-sister, Irene, relinquished her Italian citizenship in order to take up Austrian citizenship. However, Irene never completed the paperwork and, as a consequence, they remained stateless. This meant that Segantini could not marry and legitimize his own children with Luigia Pierina Bugatti.

In this work, which is one of series in the same theme of “bad mothers”, the foreground is taken up with a twisted tree and entwined within that tree, a woman. Her breasts are exposed, her body contorted, and hair caught up in the branches.

While this may appear to be a punishment, it could be said that a look of beatification is apparent as a child, that seems to come from the branches that hold her, suckles at her breast. Was Segantini trying to say that forcing a woman into a role would be its own reward in the end?

Paolo and Francesca of Rimini

Symbolism’s literary connection can also be seen in the works of the Pre-Raphaelite Brotherhood with their love of mythology and legend. Dante Gabriel Rossetti‘s 1855 work, Paolo and Francesca of Rimini, tells the story of two lovers who, discovered in an embrace by Francesca’s husband (who was also Paolo’s brother), were murdered by him.. Their tale is told in Dante’s Inferno, a book beloved by Rossetti:

“Love pardons no one loved from Love, and I

Was drawn to him with what force you can see:

It still holds me beside him as we fly.

Produced in three panels, Rossetti uses the lines from Dante to show the lovers reading a book about Lancelot and Guinevere. Paolo’s tunic matches Lancelot’s, whose own love was doomed to failure. A red rose lies at their feet: is this symbolic of a love that is about to die?

Behind the couple is a circular stained-glass window, the light of which reveals the moment of the forbidden kiss. The right hand panel has the lovers entwined, Francesca’s glowing red hair is caught in the turbulence of their embrace surrounded by fire, symbols of their passion.

Symbolism brought the art world to the brink of modernity and its exploration of a “psychological truth” allowed artists to take these abstract ideas and give them form.