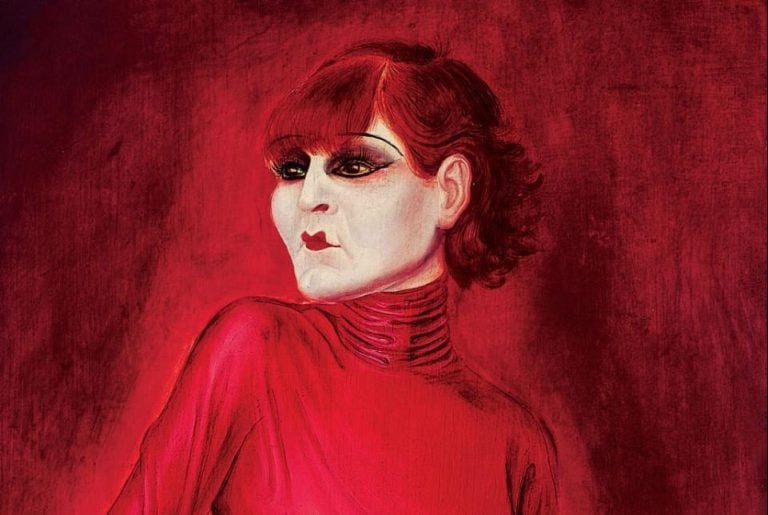 Born on 10 June 1899 in Dresden Germany, Anita Berber shocked and entertained the cabaret and bourgeois crowds of the Weimar Republic right up to her untimely death at the age of 29. Film star, nude dancer, “princess of debauchery” and subject of an Otto Dix painting, Berber was unapologetically herself.

Anita Berber was born into a middle-class family with artistic leanings. Her father, Felix, was the First Violinist of the Municipal Orchestra, and her mother Lucie was a dancer and aspiring actress. After her parents’ divorce, Berber lived with her grandmother. In 1913, she attended a modern dance school where she learned rhythmic gymnastics. She later studied traditional ballet in Berlin.

Germany from the end of World War I until the rise of the Nazi party in 1933 was a time of both economic instabilities as well as artistic creativity. The art world embraced Expressionism, and the cabaret scene exploded with risque performances thanks to a loosening of censorship laws. By the age of 20, Berber was performing nude in many of these cabarets.

Famous On and Off the Stage

In 1919, Berber married a wealthy screenwriter, Eberhard von Nathusius. They divorced after she fell in love with a lesbian bar owner, Susi Wanowski, who became her manager as well as her lover.

Besides dancing in cabarets, Berber also made more than a dozen appearances in films, including a role in the 1919 silent film Different From the Others. This film is often considered the first sympathetic portrayal of homosexuality on screen. The movie was a direct challenge to Germany’s laws against homosexuality, and the Nazis later banned it.

Berber’s bisexuality and her overall defiance of traditional gender norms were often the subject of the tabloids. Berber reportedly had a brief liaison with a young Marlene Dietrich, the Hollywood star known for her sexy androgynous style. Was Dietrich’s famous tuxedo look in the movie Morocco inspired by Berber?

In 1922, Berber married the dancer Sebastian Droste and the two of them created a book of poetry and photography titled Dances of Vice, Horror and Ecstasy, which they also performed in various nightclubs. They both struggled with alcohol and drug addiction, most notably cocaine, and their performances and poetry often included references to drugs. An excerpt from the poem Cocaine reveals the painful power of the drug in their lives:

In the stage performance titled Absinthe, Berber danced while consuming the drink by the same name.

Berber and Droste’s performances continued to shock and outrage the public. She was in jail for several weeks after personally offending the king of Yugoslavia with a nude dance performance. As a result, they were both banned from performing in European venues for several years. Reports of scandalous behavior followed Berber wherever she went. She was often seen around town with her pet monkey draped around her neck. There were reports that she visited restaurants naked but for a sable coat.

After Droste was taken to jail for fraud (he also stole Berber’s furs and jewelry), Berber met and married American dancer Henri Chatin-Hoffman in 1924, two weeks after they met.

Otto Dix and His Dancer

In 1925, Otto Dix, a German artist whose work was often heavily critical of the war, painted an intriguing portrait of Berber. Rather than depicting Berber nude, he painted her in a slinky red dress, one hand resting on her hip. She strikes a fierce, vampy pose, and her face is thickly coated in make-up as if she’s wearing a mask.

Dix and his wife knew Berber both professionally and personally (they saw several of her live performances). With Dix’s portrait, he reminds the viewer that everything, even Berber’s over-the-top sexuality and persona, is an act and a performance.

Before Berber was the subject of Dix’s painting, she sat for a series of racy lithographs by the German artist Charlotte Berend-Corinth. All of them depict a 20-year-old Berber, comfortable in her naked body, confidently taking up space, an embodiment of the “New Woman.”

An Untimely Death of Anita Berber

In 1928, Berber collapsed during a performance at a Beirut nightclub. A few months later she died from tuberculosis, most likely the result of years of drug abuse. Following her death, an unflattering and largely fabricated biography emerged, which shaped Berber’s legacy for decades. More recently she’s been seen in a new light, thanks to LGBTQ+ and feminist studies. If Berber were alive today, rather than being labelled the “princess of debauchery,” she might be seen as a fiercely confident woman, a la Lady Gaga. Berber was an early performance artist at a time when that label didn’t even exist.