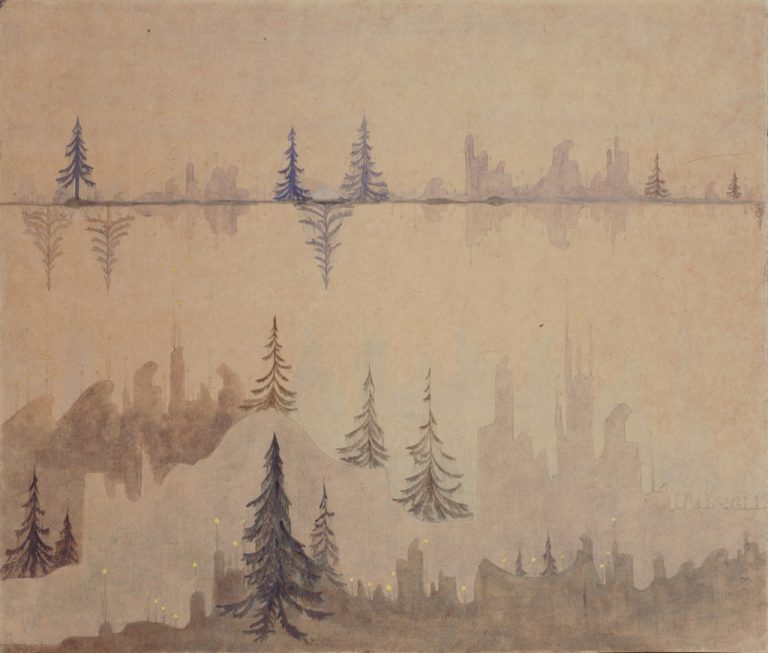 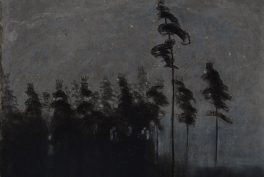 Mikalojus Konstantinas Čiurlionis (1875-1911) was a short lived Lithuanian composer and painter. Even though he started as a musician finishing two musical conservatories (in Warsaw and Leipzig), he is better known for his otherworldly paintings. During his short life and even shorter period as a painter (he painted professionally for just 8 years) he completed over 200 paintings (most of which are now kept and displayed in the National M. K. Čiurlionis museum of art in Kaunas, Lithuania) which polarized his peers and critics. He received praise for his fantasy fairy tale paintings as well as a lot of criticism from those who did not understand what he painted.

One of the main novelties (as well as oddities) of his paintings was incorporating musical theory into his painting. M. K. Čiurlionis once mentioned that he liked to paint with pastels as it reminds him of playing an instrument – how it becomes alive under the fingers. And he treated his paintings as such – as live beings that are awakened by his fingers. That is why the paintings not only seem like a still frame from a moving picture, you can also almost hear them. This might sound absurd – how can you “hear” a painting? What does music look like in a painting? To find answers, look no further than to some of M. K. Čiurlionis paintings below.

Rustling of the Forest

Picture this: you come into a still forest. You see the trees standing silent as there is no wind. Slowly, as if an invisible hand is moving through the trees, they begin to move. The hand of the wind travels farther and soon the whole forest is following by swaying to its command and rustling their leaves. Can you hear it? Can you hear the rustling?

That’s the possible premise of the first painting by M. K. Čiurlionis trying to show music in a painting, Rustling in the Forest (1904). Here the trees act as harp strings as the oncoming mist (the white hand across the trees) moves the trees to start the rustling. The hand makes it look as if the trees are about to move and rustle for the viewer.

Sonata of the Sun

You have probably heard a sonata at least once in your life. But have you ever seen one? M. K. Čiurlionis painted 7 sonatas in total and the first one is called the Sonata of the Sun.

The symbolist artist used the traditional sonata structure as he painted the four paintings below:

Fast Allegro which introduces the theme is the first painting of the cycle. The theme is the sun, or suns in this case, that act as a road from the lower part of the painting to the upper part. The main motifs are the gates and castles. This motif is played out in the center of the painting and then repeated (acting as reprise in musical compositions) in the top. You can also see a road which brings the viewer back from the top to the bottom of the painting.

Slow Andante as a contrast to the main theme. This painting slows down the music and magnifies it: you see the sun up close. You see the hot rays traveling from it and other suns nearby. You can even see sun storms that are happening on its surface.

Fast and usually playful Scherzo: the music picks up the pace and is reminiscent of the main theme. You can see a lot of butterflies which are flying upward, there are some suns and moons. Life is vivid in one of the planets that is orbiting around one of the suns. Here we see how the sunlight makes nature become alive and bloom and you can feel a good mood flowing from this part of the cycle.

And a Finale: the end of a sun. The symbolist artist shows this by painting a stopped bell which carries the first painting’s motif of gates and castles as well as sleeping kings within those castles. However the end is not as sad as it looks from the first glance; we see many little suns still flickering behind the spider web, showing that as some life ends, elsewhere it is still as vibrant as ever.

Sonata of the Sea

A sonata does not have to be four parts, it can be played in three as well. In this case the sonata has a fast-slow-fast structure which you can easily see that in the paintings.

Firstly, the playful Allegro starts the music by introducing the theme: the almighty sea. It is not an uncommon topic in various paintings, so no wonder Mikalojus Konstantinas Čiurlionis also had his take on it. You can see the main melody being repeated as the waves go higher and higher. However despite the height of the waves, the sea is still playful; it displays its amber as jewelry, glistening in the sun.

Secondly, the majestic and slow Andante, shows the sea’s treasures. You suddenly see in slow motion what the sea is hiding: boats, cities even. The melody slows as you take in all of the sights.

Finally, the music picks up the pace with a powerful Finale which shows the sea in all its glory: giant waves and tiny boats swinging upon it. This painting reminds one of Katshushika Hokusai’s The Great Wave, but from a different perspective. You can also spot the cleverly hidden artist’s, Mikalojus Konstantinas Čiurlionis, initials, MKČ, in the giant wave that is about to swamp the little boats.

From this art work, you can clearly see Mikalojus Konstantinas Čiurlionis has studied music. A fugue is a contrapuntal musical technique in which the same musical theme is repeated or imitated by two or more voices.

In Fugue, the same theme is repeated by using trees and city silhouettes on different heights. Starting from the bottom you can see the main melody which is “played” by the trees and silhouettes. Then another “voice” joins in by repeating the melody but adding in accents in different places than the first one. Then you hear an echo of the silhouettes. Lastly, the final voice joins in and all of the voices repeat their theme (hence the trees and silhouettes pointing both up and down) as they get quieter and quieter for a smooth finish.

While these few paintings do not do justice to the variety of topics Mikalojus Konstantinas Čiurlionis explored in his paintings, it can help you understand and “hear” at least a part of his legacy. As aforementioned, the symbolist artist left a lot of musical compositions, otherworldly paintings, and some writings as well. The fact that he didn’t like to explain his paintings did not help his reviews, and similarly to Vincent van Gogh, he did not get to experience the love and respect for his accomplishments he has today before he died. He died at 35 from pneumonia after a mental burnout had already weakened him. At least after his death we can honor his memory by regarding as well as “hearing” his paintings.

Greta is currently enjoying her maternity leave and volunteering at M. K. Čiurlionis National Art Museum, with a goal to introduce the undiscovered genius that was M. K. Čiurlionis to the world.