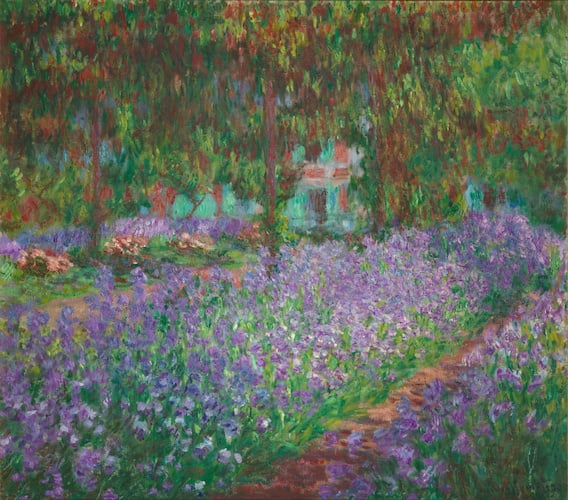 It has finally arrived! Spring is here! The freezing winter says farewell and the good weather is hopefully here to stay. The warm rays of sunshine are waking nature from its sleep, inviting the first flowers to come out. Spring is a time of rejuvenating in nature, long walks in the countryside, outdoor celebrations, and of course, flowers- hundreds and thousands of flowers! Here is a selection of masterpieces that convey the feeling of spring – so that you too can be contaminated by “spring fever”!

The French word for spring, “printemps,” has its origins in the Latin phrase “primus tempus” which means, “first time.” This word perfectly describes the essence of spring, referencing the periodic rebirth of nature after the “death” symbolized by winter.

Thus, there is no one better to represent this spring reawakening than Flora, the Roman goddess of flowers and spring. In this masterpiece by Nicolas Poussin, she is depicted as a young woman holding a blossoming bud in her hand, surrounded by a springtime landscape with clear, cloudless skies and blooming trees. Two small cupids, or Putti, bring Flora a wreath of flowers to place on her head; one of the symbols most used to represent her.

The Goddess sits in a golden chariot pulled by winged children, parading in a sort of procession led by Venus, who is accompanied by Adonis wearing a crown of white and red roses. Other mythological characters related to flowers also appear in the painting, such as Narcissus and Ajax who give flowers as an offering to Flora. As spring is associated with youth, joy, and innocence, near the chariot of the goddess we see young people and children playing with baskets of flowers, celebrating the joyful and cheerful season. Spring is also the period of love so Flora is accompanied by tenderly embracing couples and plenty of cupids, as we can see in the foreground.

Throughout the history of art we can find hundreds of personifications of Spring. One of the most famous is the painting The Birth of Venus by Sandro Botticelli. Although this painting is related to Neoplatonist concepts of beauty and love, we can find clear references to spring. In the representation of the birth of the goddess of Love we can identify the female character on the right of the painting as Spring. We recognize her thanks to the flowers on her dress.

In addition, spring is associated with freshness and the element of air, which is generally represented by the mythological character Zephyrus, the god of the winds seen on the left of the painting.

Obviously, in spring we must make special mention of the world of nature. And there is no better painter to do this than Pieter Bruegel. The artwork The Gloomy Day is the one that begins the Flemish master’s cycle of paintings of the four seasons.

The first painting corresponds to the beginning of spring: the months of February and March. In this landscape we can see nature in its splendor, waking up after a long slumber. Although Bruegel is known for being a painter of humans, in this work he shows us the smallness and insignificance of the human being in front of the great vastness of nature.

Although we usually identify spring with clear skies and sunny days, rain is also common; we see this in the work with its overcast skies and leaden clouds. In the background of the landscape, we see the mountains, still covered by a layer of snow, while the river runs turbulent, possibly after a long thaw. In the foreground on the right, we see some farmers carrying out seasonal tasks in the fields, while some children play. One of the children wears a paper crown and holds a lantern in his hand while the other eats waffles, a typical food of the carnival festival, indicating that we are at the end of winter and the beginning of spring. Village life seems to be going on peacefully under the cloudy sky while a party seems to be taking place in the tavern.

Spring is the season of joy, revitalization, and celebrations; and we think the most appropriate representation of this joy of spring is this wild exaltation of colors in Henri Matisse‘s La Bonheur de Vivre. The title of the work translates into English as The Joy of Life, but the meaning is more like: “the pleasure of living,”- that pleasure of living we all rediscover in spring. With this 1905 artwork, Matisse, among others, was crowned king of a new artistic movement that his detractors called Fauvism. As we see in this painting, this style is characterized by strong, pure, flat, even unrealistic colors, with energetic and simplified forms, leading to almost getting rid of the contours.

In this idyllic, almost surreal landscape, we see couples embracing, people dancing (a scene very similar to another famous work by Matisse, The Dance), playing music…  exactly what we all do in spring!

And because the time for outdoor parties is coming, I’ll show one more work by Bruegel (is it very obvious that I have a strong crush on Bruegel?). In this artwork from 1566, Bruegel paints a wedding dance in the open air of a forest. According to scholars, the painting shows about 125 people eating, drinking and, evidently, dancing with effusiveness and joy. In the background, we can see the table where the banquet has just taken place. We believe that the bride is in the center as she is the only woman who is not wearing her hair covered.

It is believed that the painting could have been for moral improvement since it represents some vices associated with peasants at the time, such as lust or gluttony. The mysterious man dressed in black on the left of the painting could represent the wise man who looks down on worldly pleasures. But let’s not let him spoil the party: let’s dance!

Psssst: As we have already said, spring is the season of love, so I challenge you to discover the kissing couple in Bruegel’s painting!

Don’t worry, don’t worry, the moment you’ve been waiting for has arrived: flowers, because there’s nothing more spring-like than flowers!

And for me, flowers mean Claude Monet. The French painter, father of the Impressionists, managed to describe the exact colors of the flowers touched by the sunlight, thanks to his outdoor paintings (plein air). This beautiful painting was made in the artist’s magnificent garden at Giverny. He transmits the light and exact atmosphere of a spring morning in the garden, or a walk in the countryside, to us.

Happy joyful, cheerful, blossoming, and flowery spring to all!