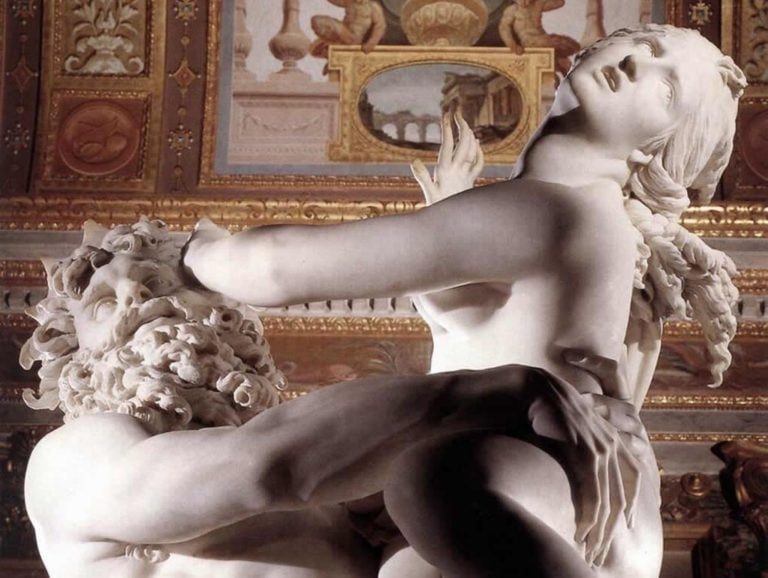 Because we like myths, tales, and legends, with the arrival of spring we take the opportunity to tell you a tale related to this magical season. We invite you to discover one of the most emblematic myths of spring: the abduction of Proserpina (known as Persephone in Greek mythology). Learn about this dramatic story of death and rebirth through the eyes of some of the most famous artists in the history of art.

The Roman poet Ovid narrates in his famous work Metamorphoses that Proserpina, was the Roman goddess of plant growth and germination. She was the daughter of Jupiter and Ceres, the Roman goddess of agriculture. Proserpina was a young woman of admirable beauty who attracted the gaze of Pluto, the god of the Underworld. Thus, Pluto kidnapped the young maiden and took her to the Underworld to make her his wife, leaving her mother desolate.

Perhaps one of the works that best illustrate the abduction of Proserpina is this masterpiece by Peter Paul Rubens, one of the greatest Baroque painters. Thanks to his training in Italy, Rubens felt a great predilection and admiration for the ancient world and mythology, as is the case of this work inspired by Ovid’s Metamorphoses.

This work is a clear example of Rubens’ mastery, both for the complexity of the composition and for its reflection of the psychology of the characters. Rubens reflects the exact moment of Proserpina’s abduction, despite the resistance of the three female figures (the goddesses Minerva, Venus, and Diana). But they can do nothing against the strength of Pluto. We also see some small cupids that whip the horses, facilitating the god’s escape.

In some versions of the myth, Proserpina would end up falling in love with Pluto, that is why the painting has the presence of the cupids. Despite the violence of the scene, the painting is full of movement, dynamism, and also sensuality thanks to the whiteness and softness of the woman’s body. The painting is a clear example of Rubens’ style: the physical exuberance of the woman’s body, the intense coloring that predominates over the drawing, and the complex but at the same time unitary composition.

Proserpina and the Spring

But it’s time to come back to our myth. The mother of Proserpina, Ceres, was so desperate in her search for her daughter in the depths of the earth that she began to neglect her duties as goddess of agriculture, so the plants and the flowers stopped growing and the trees stopped bearing fruit.

Faced with the seriousness of the matter, Jupiter decided to intervene by asking Pluto to free Proserpina. The god of the underworld agreed to free her, but first, he made the girl eat six seeds of a pomegranate. No one could eat anything from the underworld, as this would force them to remain there forever.  In many traditions, the pomegranate is a symbol of fidelity and marital loyalty. By eating the six seeds, Proserpina was condemned to spend six months of the year with her husband underground and for the other six was allowed to go outside, with her mother.

When Proserpina is able to go outside, contenting her mother, flowers grow and trees bear fruit. These are the months of spring and summer. The other six months, when Proserpina must remain with her husband, she leaves her mother desolate and the earth remains cold and barren (the autumn and winter months).

The Rape of Proserpina in Marble

The famous Baroque architect and sculptor Gian Lorenzo Bernini was also able to capture in marble the exact moment of the abduction of Proserpina. This sculptural group commissioned by Cardinal Scipione Borghese is composed of Pluto, Proserpina, and Cerberus, the three-headed dog that is the guardian of the Underworld.

The sculptural composition has a clear X shape, which indicates opposition, conflict, and violence. The open lines, typical for the Baroque style, allow us to contemplate the perfection of the anatomy, revealing the well-defined bodies of the characters.

Bernini captures the moment in which Pluto takes Proserpina to Hades. The young woman tries to resist by pushing Pluto’s head away. Her resistance is proven by the mark her nails leave on the god’s face. But he is much stronger and he grabs her, leaving the mark of his fingers on the woman’s flesh (note the magnificent realism in the execution of the sculpture!) This is a clear example of Bernini’s naturalism, which conveys the sensuality of the female skin in contrast to the rough male skin. 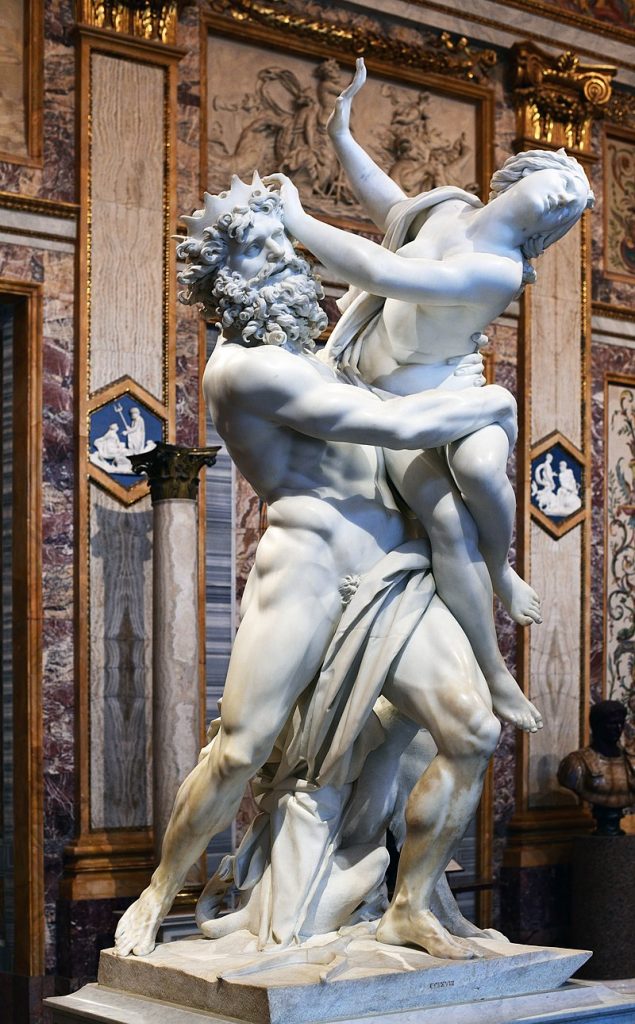 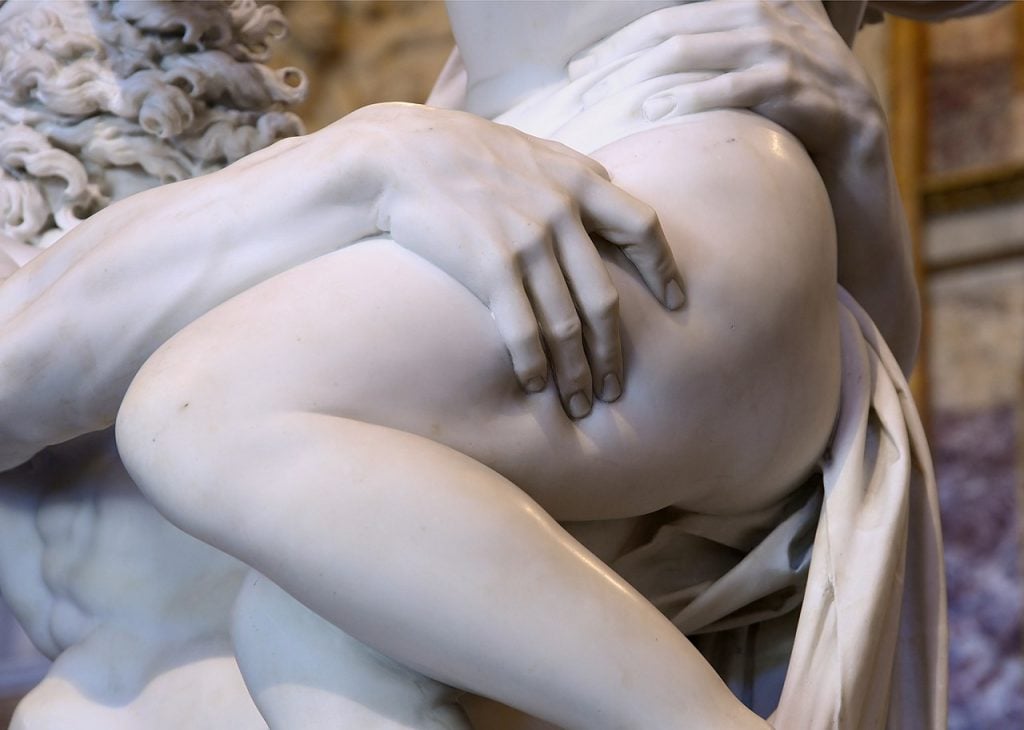 The Rape of Proserpina

The famous Baroque architect and sculptor Gian Lorenzo Bernini was also able to capture in marble the exact moment of the rapture of Proserpina. This sculptural group commissioned by Cardinal Scipione Borghese is composed of Pluto, Proserpina, and Cerberus, the three-headed dog that is the guardian of the underworld.

The Rape of Proserpina

This is a clear example of Bernini’s naturalism, which conveys the sensuality of the female skin in contrast to the rough male skin.

To give even more drama to the scene, the Italian sculptor introduces the famous guardian of the Underworld, Cerberus, the three-headed dog. The introduction of this character, besides offering more credibility to the myth, helps to give more dynamism to the lower part of the sculptural group.

In his desire to capture the instant, the author captures the flight of the young Proserpina’s tunic, which falls on Cerberus’ head and at the same time serves to cover the most intimate parts of the protagonists. We can see how tears fall on Proserpina’a cheeks in her desperate and futile attempt to escape. 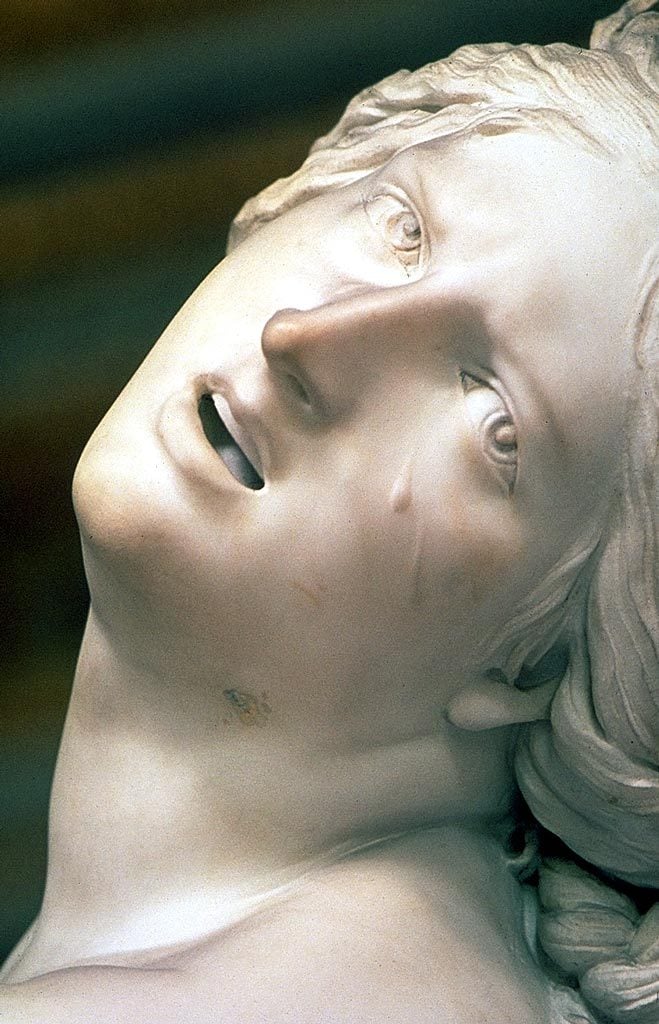 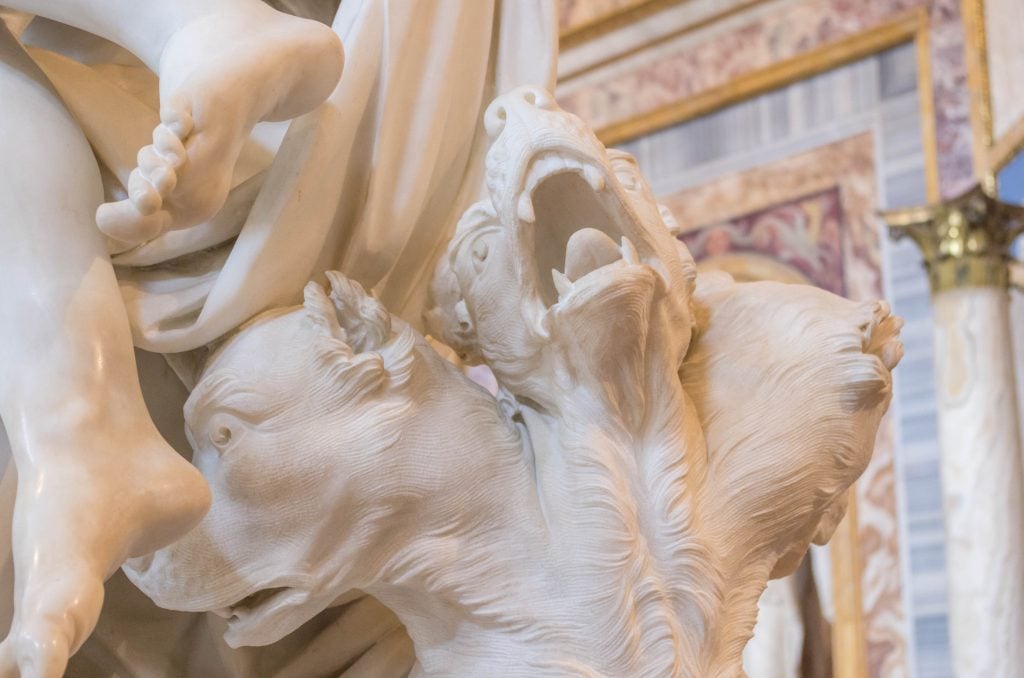 We can see how tears fall on Proserpina’s cheeks in her desperate and futile attempt to escape.

To give even more drama to the scene, the Italian sculptor introduces the famous guardian of the infernos, the Cerberus, the three-headed dog.

We would like to dedicate special attention to one of Proserpina’s attributes: the pomegranate, through one of Rossetti’s most emblematic works. Dante Gabriel Rossetti was an English painter, draughtsman, and poet of Italian descent, founder of the Pre-Raphaelite Brotherhood.

The Pre-Raphaelites used painters before Raphael as their stylistic reference. They gave great importance to literary, everyday, and medieval subjects. Their main objective and purpose were to bring supreme beauty to good souls, in front of the lack of ideals of industrial society.

In this artwork, the symbol of the pomegranate acquires great prominence in the painting of Rossetti. The woman who served as Rossetti’s model for the work was Jane Morris, the wife of William Morris.

Apparently, Jane Morris was unhappy in her marriage to Morris, and it was widely known that Mrs. Morris was romantically involved with Rossetti. Thus, the painting becomes more a portrait of Jane than a representation of Proserpina. Symbols take on essential importance.

First, the pomegranate symbolizes fidelity in marriage and is also the fruit that held Proserpina captive. Could this also be a reference to Jane’s captivity in her marriage to Morris? The symbol of the incense burner also appears, pointing to Proserpina’s divinity. Finally, we can see the meticulousness of the decoration in the folds of the clothing and in the ivy.

But, to end on a good note, it is spring at last! So, we deduce that our dear Proserpina has already been reunited with her mother Ceres, whose joy is seen in natural springtime exuberance. Happy cheerful spring!