Pieter Bruegel the Elder, The Harvesters 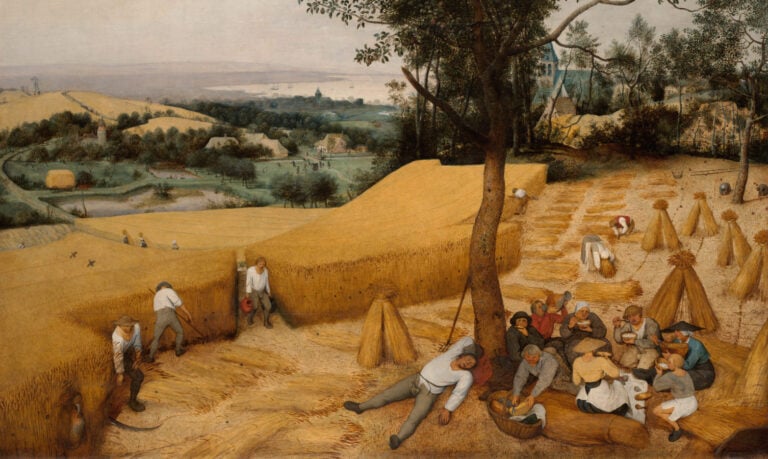 This panel is part of a series showing the seasons or times of the year, commissioned from Bruegel by the Antwerp merchant Niclaes Jongelinck. The series included six works, five of which survive. The other four are: “The Gloomy Day,” “Hunters in the Snow,” and “The Return of the Herd” (Kunsthistorisches Museum, Vienna); and “Haymaking” (Lobkowicz Collections, Prague).

As in many of Breughel’s paintings, the focus is on peasants and their work. Notably, some of the peasants are shown eating while others are harvesting wheat, a diachronic (relating to phenomena such as ideas, language, or culture, as they occur or change over a period of time) depiction of both the production and consumption of food. Pears can be seen on the white cloth in front of the upright sitting woman who eats bread and cheese while a figure in the tree to the far right picks pears.

This painting and the rest from the series is groundbreaking in the history of Western art. The religious pretext for landscape painting has been suppressed in favor of a new humanism, and Bruegel’s unidealized description of the local scene is based on natural observations.

The painting has been at the Metropolitan Museum of Art in New York City since 1919.