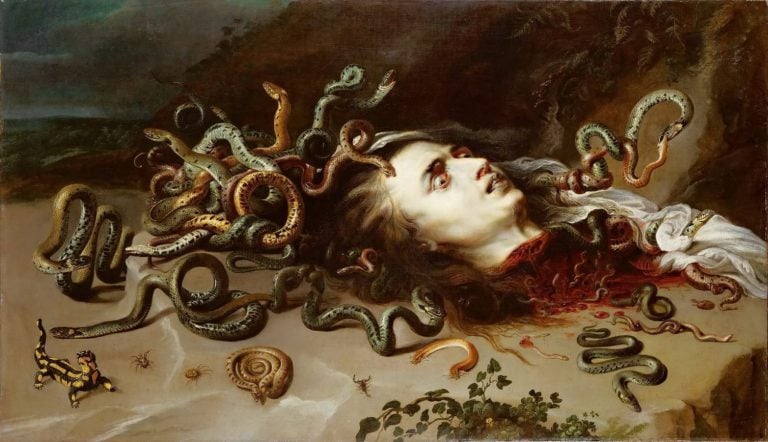 Horror isn’t an element only in movies or literature. Artists throughout the time have painted many repulsive and ghastly themes. For example, an elderly man is devouring his own son, a beautiful lady is beheading her enemy, and a sculpture of a faceless head is pouring a thick, black fluid. No, horror in art is definitely not for the faint of heart.

Classic and modern art might be less vivid since the freaky remains on canvas. However, contemporary art takes from life. Maybe it is because of the new means available for artists. Or because the tastes have changed, as everything else has with the passing of time. So, in honor of Halloween, we present to you some of the scariest pieces in the history of art. But, be prepared! The artworks presented here are very frightening, you will need a strong stomach. Otherwise, prepare to feel really uncomfortable.

Art history can be terrifying. Classic art is mostly beautiful and elegant until you come across The Garden of Earthly Delights by Hieronymus Bosch. Marta Loza analyzed this triptych thoroughly. Let’s look for a little bit at the right panel which depicts Bosch’s version of Hell. As you can see for yourself, the details are very disturbing.

Of course, in the past painting religious themes were common. Thus there have been many depictions of hell. Another very scary one is The Triptych of Earthly Vanity and Divine Salvation.

Saturn Was a Cannibal

Another major inspiration for classic art was mythology. Theoretically, mythology isn’t (that) scary. Nevertheless, this is not the case with the legend of Saturn. Saturn was a Roman god obsessed with power and he ate his children so that they wouldn’t dethrone him. Certainly two of the creepiest depictions of this lovely family story were made by Francisco de Goya and Peter Paul Rubens.

In early modern period, women faced many obstacles if they wanted to be painters. One of these was when they wanted to paint nudity or violence. Nonetheless, some did paint. Probably the most famous painting in this category is Artemisia Gentileschi’s version of Judith Slaying Holofernes.

If anyone has ever believed that removing someone’s skin was only a contemporary horror movie thing they obviously know nothing about medieval torture. It was actually far worse than we can imagine. It was also very common in painting.

Horror in contemporary art is much scarier, as new media offer a lot of creative freedom. However, there aren’t any categories by subject or means. This is because the subjects are various and random. Moreover, artists interpret their subjects very differently. So, without analyzing it too much, enjoy some of the scariest pieces of contemporary art.