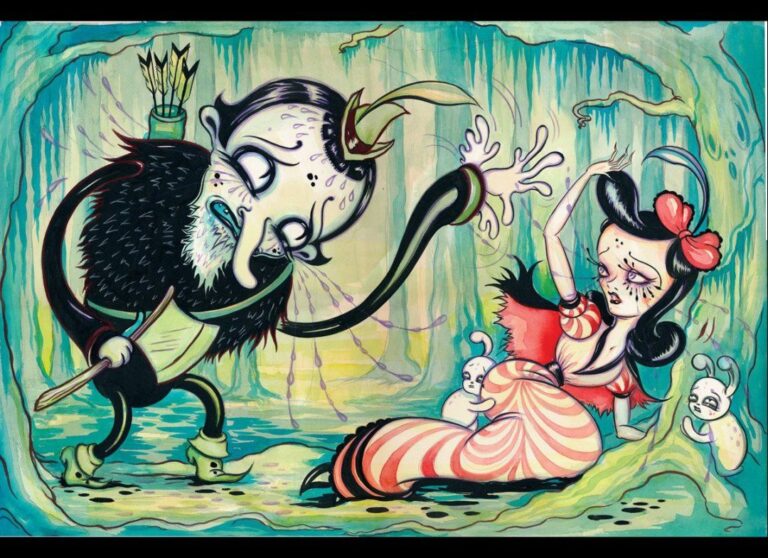 Somewhere between the late 1960s and the 1970s, a new artistic movement emerged from the underground scene. At that time it didn't have any self-consciousness, as there wasn't even a name for it. However, the art was present and it appealed to ordinary people. The art movement under discussion is called Lowbrow. Some consider it a branch of pop art. Nonetheless, it grew so much, that it gave life to new offshoots. So let's see what the Lowbrow movement actually is. Is it just another subculture or does it define a whole generation of artists?

Lowbrow arose in Los Angeles, California in the late 1960s and 1970s. It was an underground visual art movement. In the beginning most of the artists were underground cartoonists, like Robert Williams and Gary Panter. Some believe that the movement has its roots in the late 1950s when Ed "Big Daddy" Roth created Rat Fink, in South California. During the 1960s, Lowbrow flourished into underground comix (yes, on this occasion, it is spelled this way) like Zap Comix. The most distinctive artists were Robert Crumb, Victor Moscoso, Steve Clay Wilson, and the pillar of the movement, Robert Williams.

The goal of the movement was to get a rise out of convention. Most artists, if not all, were self-taught and they had nothing to do with fine art. Even though they knew the "rules" of art, they unapologetically didn't follow them. This led to the disapproval of the movement by mainstream critics, curators, and galleries. Nonetheless, there were some alternative galleries in Los Angeles and New York, who organized exhibitions of lowbrow artists. To name a few of these galleries, there was the Psychedelic Solution Gallery in Greenwich Village, New York, La Luz de Jesus in Los Angeles, and 01 gallery in Hollywood.

Origin of the Term

In 2006, Robert Williams took credit for originating the term. He stated that back in 1979, Gilbert Shelton, the publisher of Rip Off Press, decided to make a book of Williams' paintings. So Williams had to think of a name for the book. He named it The Lowbrow Art of Robt. Williams since no authorized art carrier would recognize his type of art. Thus lowbrow opposed highbrow, which is the high culture. The name stuck although Williams felt it was not suitable. He refers to the movement as "cartoon-tainted abstract surrealism". When it comes to his own work, he lately refers to it as "conceptual realism".

In 1994, Robert Williams, along with Greg Escalante and Eric Swenson, published the first Juxtapoz magazine. The aim was to express and legitimize the Lowbrow art movement. The magazine had a huge impact on the representation and projection of lowbrow artists. Of course it didn't publish only lowbrow, but also underground cultural stuff too. It was always proud of its cultural roots and it didn't hesitate to show it.

The magazine is still being published today and it is the second most-read art magazine in the USA. It counts thousands of readers, and after 26 years it is still going strong on art and culture affairs.

Legitimacy of the Movement

As aforementioned, the Lowbrow movement didn't have and still doesn't have the approval of the Art World. Certainly the Art World didn't approve of many movements when they first emerged, such as realism, fauvism, dada, surrealism, expressionism, Indian River School, or the Florida Highwaymen, and many others.

However, if the necessary conditions for the legitimacy of a movement are the ability to last, and to speak in visual terms to a large audience, it is safe to say that Lowbrow is a legitimate art movement. It corresponds to the needs of ordinary people for a common cultural language. It has defined a whole generation of artists and it would be unfair to not applaud them.

The Rise of Pop Surrealism

Lowbrow manifests itself differently in varying regions, places, and social conditions. Some see a distinct U.S. "West Coast" style, which is influenced by tiki culture, surf culture, and hot rod car culture. The fact that there are many descriptions proves the case in point; underground, Neo-Pop, and Kustom, are only a few.

As the Lowbrow movement started to grow, some artists tried to take their art to the next level. So a new branch emerged: Pop Surrealism. These artists were trained in the fine arts but they were charmed by the lowbrow style. Kenny Scharf, the godfather of Pop Surrealism, gave a very good definition of his work and by extension to this new style:

Basically, Pop Surrealism is the marriage of pop culture icons to the obscurity of surrealism. Gradually, the line between lowbrow and highbrow blurred. The artists use pop icons, like Disney characters or Marilyn Monroe, to transmit social and political messages. Meanwhile their technique reminds one of Van Gogh, Picasso or Dali, and other great artists. The result is a beautiful and polished work of art, in comparison to pure lowbrow's raw and rough.

One of the most famous Pop Surrealist artists is Mark Ryden. He uses pop idols and puts them into dreamy or creepy environments. There are also Ray Caesar, Jeff Sotto, Yoshimoto Nara (the Keane eyes have been a major inspiration for him), Alex Gross, Camille Rose Garcia, Tara McPherson, and so many others. Also, Hi-Fructose magazine publishes many artists. It kind of does the same thing as Juxtapoz, although Hi-Fructose leans towards Pop Surrealism. Whatever the case, it has helped in strengthen both movements.

Thus Pop Surrealism appeals to ordinary people too. The average citizen isn't interested or educated in art history, but is into pop culture. Therefore, it is easy to enjoy Pop Surrealism. Along with the rise of Pop Surrealism and its public appeal, came the first validation of the Lowbrow movement in the art world. Galleries have opened their doors to these artists and have held their exhibitions. Of course there is still a long way to the top, but at least there is some recognition.

In the 2000s everything went digital. So did Lowbrow and Pop Surrealism. The artists started using photoshop and 3D modeling to create their art. Unfortunately with this adaption came an identity crisis. Nowadays anyone who creates a kitschy or pop illustration claims to be a lowbrow artist. So, how do artists who make flawless lowbrow paintings or sci-fi sculptures separate themselves from all others? How can one prove that their technically perfect works are proper lowbrow or pop surrealism when under the hashtag #popsurrealism, there are millions who claim to be suitable representatives?

All images are for illustration purposes only.