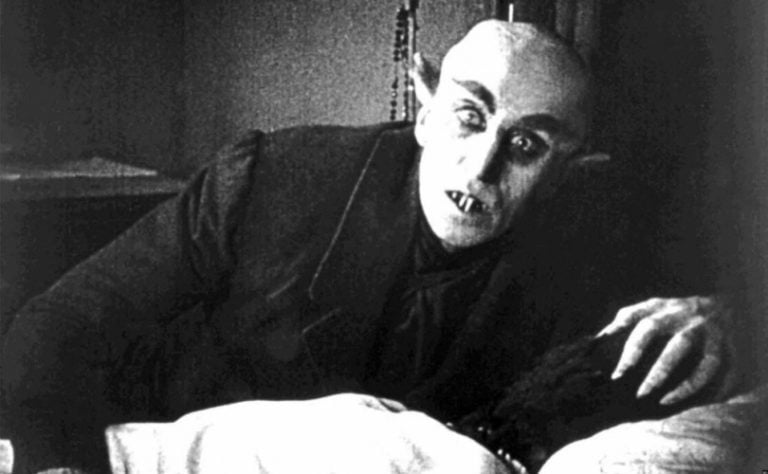 Expressionism is a movement with many branches. It inspired various artists and each one of them embraced it differently. Above all, it encouraged experimentation with art. The goal was no longer to imitate nature. Rather, it was to express the purity of emotions through colors, lines, and shapes. German Expressionism influenced cinema too. Its basic principles do not differ from painting or sculpture. Let’s examine these principles, how and why they flourished in Germany, and of course the impact of German Expressionism on horror movies.

Expressionism is a form of engaged art, it is engaged in society and its problems. Indeed the artists of the movement felt human pain and suffering, violence, poverty, very deeply. This led them to believe that dedication to harmony and beauty in art lies in the denial of honesty and integrity.

Expressionism was rooted in Germany, and it succeeded in raising the fury of ordinary people. German painters formed Die Brücke as an answer to the request for radical change. The goal was to provoke a total schism with the past and to fight for a new day. Consequently, these painters claimed that there was no need or desire for ornamental elements in their art. Instead, they sought the intensity of expression. Some of the most famous painters of both groups are Ernst Ludwig Kirchner, Erich Heckel, Paul Klee, Oskar Kokoschka, Wassily Kandinsky, and Franz Marc.

In Expressionist art, the object holds a moral or emotional judgment, depicted in the overall perception of it. It manifests itself as disfigured, deconstructed, or distorted. However, it is not a caricature of reality. It is the beauty that surpasses the ideal concept of reality and eventually becomes ugliness. Images become an ultimatum: the ugly is nothing other than a humiliated and dethroned beauty.

Deformation is a major characteristic of Expressionism. As we will see further on, it also had a huge impact on cinema too.

Germany After World War I

It is very important to understand a few things about Germany and its situation in the 1920s in order to comprehend the rise of cinema. Germany faced huge political, social, and economic problems after the Great War (World War I). The rate of inflation was extremely high; before the war 1$ equaled 4 marks, by the beginning of 1923, 1$ equaled 50,000 marks, and at the end of the same year it equaled 6 billion marks. Every day, the currency was losing its value at a tremendous rate. Therefore, there was no use for people to try to save money and thus, people tried to spend it right away. One way of doing that was by going to the movies.

Despite this terrible situation, cinema experienced a bloom from 1919 to 1933. The growth of the cinematic industry was due to a variety of factors. First of all, it grew because of the implementation of isolationist policies. The German government prohibited almost all foreign movies in 1916 and this lasted up to December 31st, 1920. As a result of inflation, it was also very cheap to export German movies and very expensive to import foreign ones, like those from Hollywood. Moreover, the German government itself wanted to enhance the cinematic perception of the Germans. Thus, it created a huge film studio in 1917, called UFA (Universum Film Aktiengesellschaft). In this manner, German movies became widely popular, second only to those of Hollywood.

The German Expressionism horror movies of this period are an extension of the aforementioned Expressionism and they have some characteristics in common. Firstly, the emphasis lies in the psychological background and artistic research. The visual language of these movies is so advanced that there is no need for subtitles to express their content. Additionally, the characters are complex and in distress, often with Freudian backgrounds. The movies portray a cinematic world that does not render an unbiased and impartial reality. It reflects the subjective distortion of characters in moral crisis or with a frantic psyche.

Hence, the outside world is heavily disfigured so as to express all these emotions. To achieve this the directors only produced these movies in studios and not in the outside world. The result is complete control of the image, and the establishment of a claustrophobic ambiance. Thereby, the set becomes part of the action. The directors hired set designers and architects, who knew all of the artistic movements of the time (Expressionism, Cubism, Constructivism, etc).

Furthermore, the acting is purposely exaggerated. The actors become one with their character. They manage to express their emotions and their point of view in the smallest movements and mostly using the expression of their eyes. Some of the most famous actors are Emil Jannings, Werner Krauss, Conrad Veidt, Lil Dagover, and Asta Nilsen.

There are four categories of Expressionist movies: historical and mythological, fantasy and horror, realistic and psychological, and documentaries in abstract synthesis.

All movies of this category take place in either the past or a future time. Their universe is fantasy, threatening, and macabre. Usually, there is a dominant figure with supernatural powers and criminal goals, like Caligari or Nosferatu. This figure also has in his service robots, alive dolls, dead or imaginary beasts. The set designers use their imagination to create a nightmarish and obscure environment. They achieve this by creating unnatural perspectives, using angular shapes or disproportionate volumes. Even external scenery, for example, daylight, are hand-painted in the studio.

The Cabinet of Dr. Caligari

The Cabinet of Dr. Caligari (1920) is the first movie of the movement and the most representative because it has all the characteristics listed above. Not to mention the fact that it was also a milestone in the history of cinema. It is a horror story of crime and supernatural power. The hypnotist Dr. Caligari uses a sleepwalker to commit murders.

The painters Hermann Warm, Walter Rearing, and Walter Reimann were the designers for the movie. Furthermore, Karl Mayer and Hans Janowitz wrote the scary script. Mayer in particular was a pillar of the German Expressionist cinema.

Nosferatu (1922) is the only movie whose director shot it outside of the studio setting, creating paranormal action in normal scenery. Friedrich Murnau, one of the most distinguished directors of this kind, uses pure cinematographic means: continuous use of contre plongée (the technique of shooting from a wide-angle), fast motion, negative images, duplication, and abrupt stops in movement. Natural light creates Nosferatu’s huge shadow. This makes the atmosphere scarier and even more captivating than the painted shadows of the studio.

One very important thing about this movie is the inside stories. For example, the actors read the Book of Vampires, which explains the basic principles of the behavior of a vampire. This is an essential detail since no vampire movies had been made previously. An extra side story is the journal of the boat that takes Count Orlok to Bremen, where the movie is set.

Metropolis (1927) is another icon of cinema. Fritz Lang, the director, creates a futuristic city, in which the workers work in huge underground factories. Everything, including their homes, are distorted, following the Expressionist style. Unfortunately, the movie suffers from excessive embellishment and vagueness. Moreover, there is latent fascism everywhere, as the movie shows that people are an invariable mass. They are an unvarying mass and are incapable of individual thought and action.

Golem takes place in 16th century Prague, where a rabbi creates a giant Golem of clay. Using sorcery, the Golem comes to life in order to protect the Jews of the city from persecution.

Nibelungen consists of two parts, Siegried’s Death and the Kriemhild’s Revenge. Both aired in 1924 and they are based on the homonym German saga.

In Algol (1920), an industrialist creates an empire thanks to the supernatural help he receives from planet Algol.

Of course, there are more movies of this type, these are just suggestions. One can easily find others by searching the names of the previously mentioned actors or directors. Also, all of the movies discussed are available for free on Youtube.

The Downfall of German Expressionist Cinema

However, all these stylistic characteristics and the obsessive attachment to them became the downfall of German Expressionist cinema. Also, many of its most important directors moved to Hollywood. The aesthetics of German Expressionism influenced American cinema as waves of immigration grew larger as Hitler rose to power. The Nazis considered these movies degenerate and prohibited them.

However, there is another thing that led to this decline. As we saw in Metropolis, latent fascism was present. This is a characteristic of all the movies, they all clearly lean towards totalitarianism. There is no chance for democratic action, there is either tyranny or chaotic anarchy. In The Cabinet of Dr. Caligari, for example, it is exhibited by the choice between the asylum (tyranny) or the fair (chaos). The ideological background of German Expressionism horror movies prepared the ground for fascism. Hitler realized this and decided to use it for propaganda.