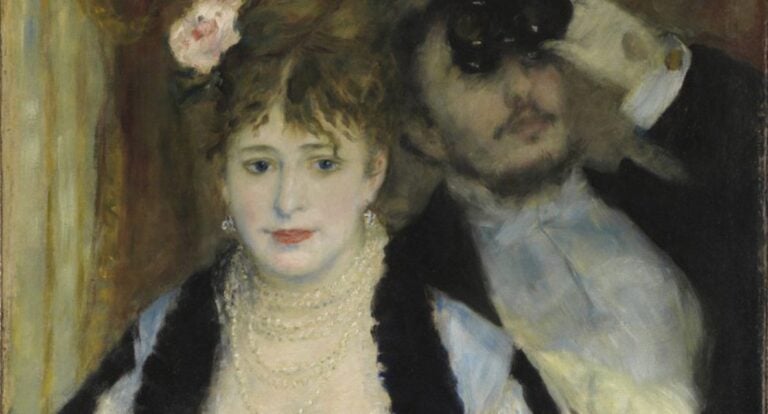 Entertainments such as cabarets, theatres and the circus were popular themes among the Impressionist painters whose mission was portraying the modern city life. Theatre in Paris was a rapidly expanding industry during the 19th century where it was important to be seen. Hence it was also a perfect subject for a painter wanting to present a social vanity fair.

Here we see Pierre-Auguste Renoir’s younger brother Edmond sitting in a theatre box with Nini Lopez, a model known as “fish-face”. Edmond uses a pair of opera glasses to scan the audience while Nini holds hers in her hand, her gaze slightly unfocused as if she knows she is being looked at by other operagoers.

Edmond Renoir was a journalist and art critic and it’s hard to tell anything interesting about him (other than that he looks quite handsome in this painting). Yet there is more to tell about his companion: Nini Lopez was a frequent model for Renoir’s paintings, but this particular one was her first one. Known for being serious and punctual, the young woman became the artist’s favorite model between 1875 and 1879, appearing in at least 14 paintings. In 1877 Nini disappeared from Renoir’s painting following her marriage to a third-rate actor in the Montmartre theatre. Her mother was quite disappointed, as she preferred her daughter to marry someone from the bourgeoisie.

But back to the painting itself. Renoir was the ultimate painter of the pleasures of the eye. His art centered on the concept of art as something “chic”. A contemporary critic known as Bertall described “chic” as a “bearing, ease of manner, appearance and impromptu elegance…” This is what The Theatre Box captures with delicate brushstrokes and sensual tones.

The Theatre Box was included in the Impressionists’ first group exhibition in 1874. Critics were divided over it: one saw it as a warning of the dangerous temptations of the fashion industry; another praised its elegance. One thing is known for sure – this painting is a hymn to 19th-century French elegance.