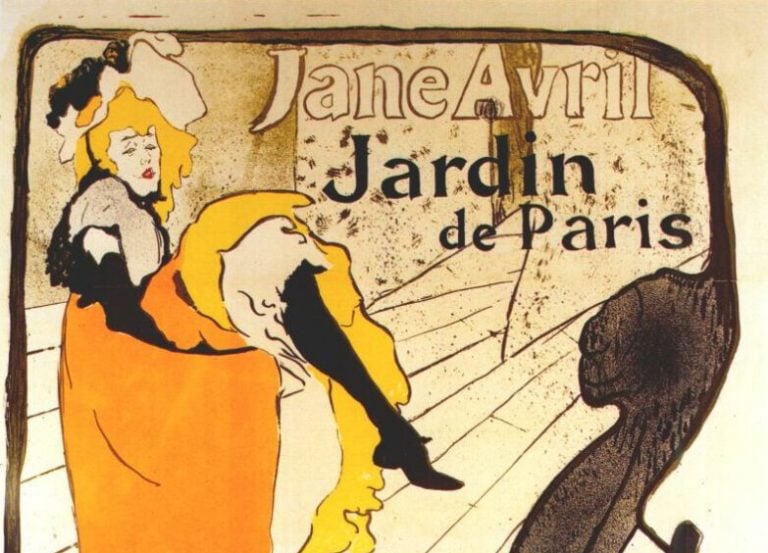 On the outskirts of Paris, a working-class district with cabarets and dance halls called Montmartre became the bohemian center of the city. Musicians, poets, writers, and artists used the cabarets as “laboratories” to exhibit their works, recite poems, and sing songs. One of the regular frequenters of Montmartre was Henri de Toulouse-Lautrec, the creator of the illustrated poster form, which back then was a completely innovative genre. Let’s look at the collection of his most famous cabaret posters.

Henri de Toulouse-Lautrec was born in 1864 into French noble family. Because of health problems caused by inbreeding, he was unable to do many physical activities, so he immersed himself in drawing. With child-sized legs which didn’t grow and an adult torso, he looked grotesque, which he often highlighted in his works.

When in 1889 the cabaret Moulin Rouge was founded, Toulouse-Lautrec, commissioned by its owners, produced a series of advertising posters. In the first one, Moulin Rouge, La Goulue, he introduced viewers to a very famous dancer, La Goulue, creator of the “French can-can.”

This poster is much simpler in terms of detail, but it also contains a deal of energy originating from the eye-catching contrast between warm (yellow, red, brown) and cool (blue, black) colors. To balance the model, Lautrec added another figure, the shadow-man with a cap, separated by a yellow line (similar to Japanese prints). A hat, a scarf, and a hand with a stick form a perfect union, along with the undefined shape of the body, help to focus on the face, showing the model’s personality.

May Milton is very simple in design and what makes it really modern is the sharp contrast of colors. A delicate dancer drawn on the white space, surrounded by a serpent-like dress, stands out from the deep blue background. One remarkable detail is the clown with a banjo prancing in the right bottom corner, a little prank from the artist. This poster was so interesting that Picasso incorporated it into his painting The Blue Room after Lautrec’s death.

In his short career, Toulouse-Lautrec created more than 350 prints and 30 posters, as well as lithographed theater programs and covers for books and sheet music. He took up lithography at a high point in its history when technical advances in color printing and new possibilities for larger scales led to a proliferation of posters as well as prints for the new bourgeois collector.