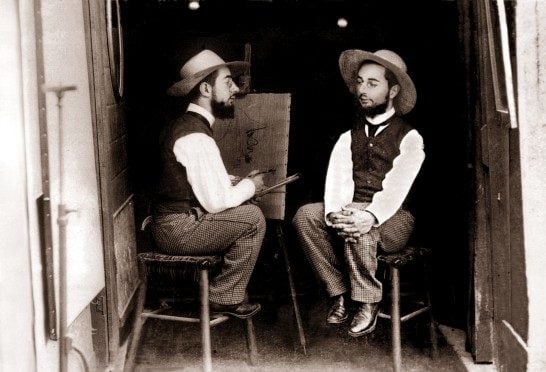 Henri de Toulouse-Lautrec, was a French painter, printmaker, draughtsman, caricaturist, and illustrator. He produced a collection of provocative images of decadent Paris in the 19th century. Everyone knows his most famous works presenting the stars of Montmartre, bourdelles, and cabarets. But not everyone knows about his interest in photography.

Toulouse-Lautrec’s close friend, Maurice Guibert was a self-taught photographer, an agent for the champagne company Moët and Chandon, and a member of the Société française de photographie. He took plenty of very interesting photographs of Toulouse-Lautrec, often using photomontages. Maurice Guibert’s work not only documents the life and creation of the painter, Henri de Toulouse-Lautrec, it also highlights how much photography was emerging as a specific artistic discipline that was going through its own experimentations and aesthetics.

Although the amateur photographer was simply following the common photographic conventions of the turn of the century, his ironic perspective on the subject drew emphasis to the special position of the already internationally known artist. Here we found 10 photographs that will make you fall in love with Henri de Toulouse-Lautrec.

We all think that the photomontage technique is a modern invention only possible to achieve with computer programs. Actually, this effect was known and widely applied in 19th century photographs. Photographers would often re-touch their photos in dark rooms achieving a variety of effects – from bringing life to post-mortem photographs of the deceased to funny and quirky montages like this one above.

Toulouse-Lautrec, like many other French artists of that time, was fascinated and heavily influenced by Japanese art entering the European art market. The “fever” for Japanese art and culture that we know today has its roots in the 19th century. The art produced by European artists in accordance with Japanese aesthetics is called Japonisme.

Absinthe was the iconic drink of the Parisian bohème. In French, it was called “La Fée Verte”, meaning “The Green Fairy.” Most of the avant-garde artists drank absinthe. Why? Maybe because this drink was known for its addictive, mind-altering properties that could affect the psychological state. This alcoholic beverage was depicted by the most prominent painters of that time, Edouard Manet, Vincent van Gogh, and Picasso…

In this photograph by his friend, Maurice Guibert, we can see a bit of Toulouse-Lautrec’s personality. He liked to dress up in costumes, pose in quirky poses and make funny faces. He epitomized the theatrical and dramatic lifestyle of Parisian decadents from the 19th century.

Pierrot is an iconic character of French pantomime and commedia dell’arte. Tolouse-Lautrec posed in this photograph as the French clown, wearing his characteristic white costume and a cone hat.

6. Asleep in a Chair

Toulouse-Lautrec was captured in this photograph sleeping in a garden chair, enjoying some free time, and resting in nature… We should take an example from him and let ourselves rest once in a while!

You won’t believe it! This is not photoshopped. These photographs were taken in 1898 by Toulouse-Lautrec’s childhood friend, Maurice Joyant. The artist went on a beach Le Crotoy in Picardie and decided to defecate for fun.

Arcachon Basin or Arcachon Bay is a bay on the Atlantic coast of southwest France. In these 19th century photographs of French artists, we can often see them vacationing and enjoying the beauty and versatility of the French landscape.

Another photograph from the same trip! Don’t you think that this is so refreshing to see artists from the past just simply being human and funny? Normally we “meet” them and experience their legacy in serious museums and galleries, but in these photographs we can see them in their private and intimate moments, among friends, just simply enjoying their time…

10. Toulouse-Lautrec with His Model Mireille

Toulouse-Lautrec posed here with Mireille, one of the women in the brothel on the Rue d’Amboise. He was particularly fond of her and portrayed her numerously in his brothel scenes depicting the realities of Parisian sex workers. Here you can see Mireille looking at herself painted on Toulouse-Lautrec’s work entitled In the Salon of the Rue des Moulins from ca. 1894.

Did you enjoy our selection? Let us know in the comments which photographs are your favorites!