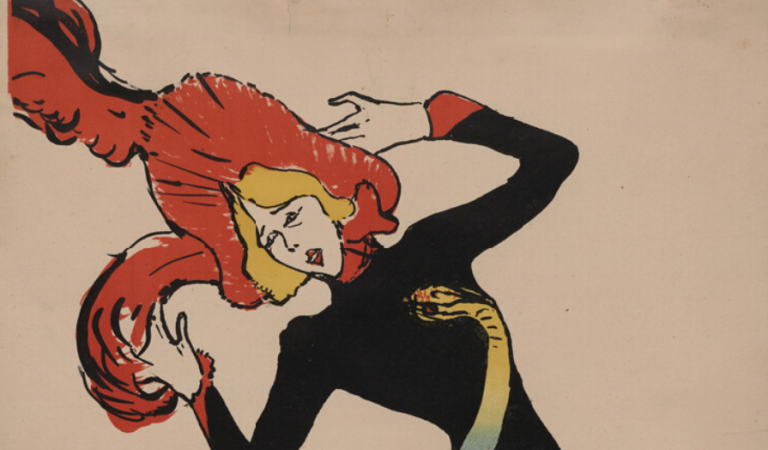 Jane Avril was a dancer and star of the Moulin Rouge in the 1890s. Her legend is alive until this day – her semi-fictionalized character was reinterpreted by Nicole Kidman in the 2001 movie Moulin Rouge!.  She also became an emblematic figure in Henri de Toulouse-Lautrec’s world of dancers, cabaret singers, and musicians. Known for her alluring style and exotic persona, her fame was assured by a series of dazzlingly inventive posters designed by the artist, who also became her close friend.

Jane Avril was born Jeanne Beaudon. Her mother was a sex worker and her father was an Italian aristocrat. As a teenager, he ran away from home and was eventually admitted to the Salpêtrière Hospital, with the movement disorder “St Vitus’ Dance”, now thought to be Sydenham’s Chorea, which is characterized by rapid, uncoordinated jerking movements primarily affecting the face, hands, and feet.

Some latest research examines the connections between Avril’s eccentric movements, described by one observer as an “orchid in a frenzy”, and theories of female hysteria, which are now considered to be outdated. Her experiences helped shape her public persona and, as a performer, she was also known as L’Étrange (the Strange One) and Jane La Folle (Crazy Jane).

In the hospital, Avril received various kinds of treatment and claimed in her biography that, when she discovered dance at an event organized for employees and patients at the hospital, she was cured. On leaving the hospital, after a failed romance, Avril made a suicide attempt but was taken in by the Madame of a Parisian brothel. She started to work as a dancer and used the stage name Jane Avril given by her lover. This is when her career started. She was hired by the Moulin Rouge nightclub in 1889 and everyone wanted to see her famous dance.

Despite her fragile and rather ethereal look, on stage, she proved to be an acrobatic dancer, full of energy and grace. She was even regarded by her contemporaries as the “incarnation of dance”.

At age 42, she met and married a German artist, Maurice Biais, and the couple moved to a house on the outskirts of Paris. However, her husband soon began to stray, often disappearing for days at a time, and for years she lived a miserable existence. Without any financial support following his death in 1926, Avril lived in near poverty on what little was left of her savings. The dancer died in a seniors’ home in 1943 at the age of 75. She was buried in the Père Lachaise Cemetery in Paris.

Toulouse-Lautrec’s relationship with Avril was closer than with any of the other Montmartre artists and she remained his loyal friend until his death. Toulouse-Lautrec created a magnificent series of remarkable portraits in which the dancer is shown as a private individual, in contrast with her exotic poster image and her performances at the Moulin Rouge.