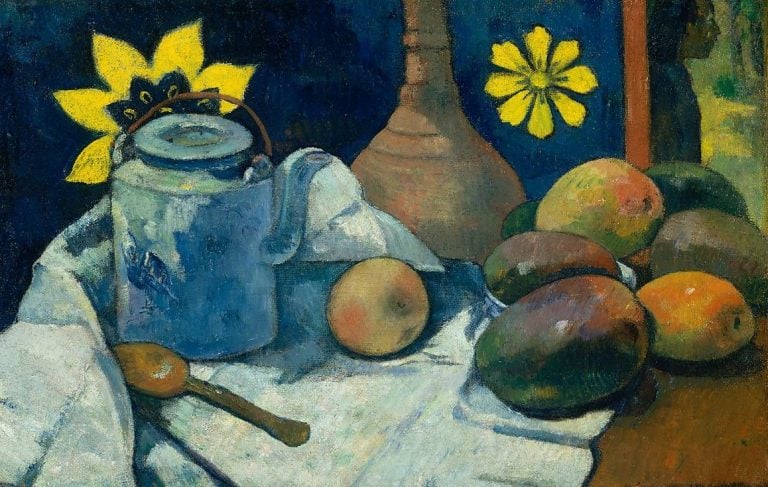 Psst, are you in the mood for a sweet treat? Most know Paul Gauguin for his landscapes and the portraits he painted during his time in Tahiti. But there is so much more to find out about his artworks. If you are looking for something exotic, here are some of the fruitiest still lifes painted by Gauguin.

Paul Gauguin (1848–1903) was a French Post-Impressionist artist. His work has often been associated with the Symbolist and Synthetist art movements and set the scene for Primitivism. He applied bright and unconventional pigments in smooth patches of color and used clear, definitive lines to outline his shapes.

Gauguin was friends with Vincent van Gogh, inspiring each other when they painted together in the south of France. Towards the end of his life, he lived in Tahiti, French Polynesia, where he created arguably his most important and controversial body of work. He remained unappreciated as an artist until after his death, thanks to two exhibitions organized posthumously in his honor.

Gauguin influenced other artists after his death, including the Cubist painter Pablo Picasso and Fauve artist Henri Matisse. His artworks include The Yellow Christ, Tahitian Women on the Beach, and When Will You Marry?

1. Still Life with Profile of Laval

Charles Laval (1861–1894) was a Synthetic painter associated with the famous Pont-Aven School. In this painting, Laval closely examines the objects displayed on the table. The most unusual piece is the ceramic pot, made by Gauguin, half-hidden among the fruits. Laval’s portrait is odd because Gauguin cropped it at an unusual (almost uncomfortable) angle. The fruits depiction is reminiscent of Paul Cézanne’s art style, while the awkward-looking profile of Laval draws back to Edgar Degas’ compositions.

Fun fact about Gauguin: Together with Laval, he traveled to Panama in 1887 for a painting exhibition!

Gauguin was inspired for this painting by children’s books and Japanese print, which were very fashionable at the time. He painted this still life while he lived in Brittany among a group of experimental artists. If anything, this painting is far from being naturalistic. Gauguin split the canvas into three easily distinguishable sections: the dogs, the goblets, and the fruit, each arranged in groups of three.

The puppies are painted in blue, the pattern on their backs resembling the design on the white tablecloth. They are also drinking water from what seems to be a cooking pan. In the lower-right corner, the artist placed a bowl of fruit and some pears. Gauguin played with compositional effects in this piece, causing the viewer’s sense of perspective to be somewhat distorted.

3. Still Life with Apples, a Pear, and a Ceramic Portrait Jug

A pear, a sculpture, and apples! For this still life, Gauguin used lively strokes of color. Tones of turquoise, green, and orange are mingling together to render a summer display. The white apple bowl placed on the wooden table counters the intensity of the fruits, offering a refuge for the eye to rest. A lonely green pear stands guard at the margin of the composition. Perhaps the most enticing element of the still life, the ceramic jug, is the portrait of an anonymous figure. I wonder who that might be. Any guesses?

Still life with Tahitian Oranges might be the most exotic still life out there. The bowl of oranges stacked on top of each other dominates the center of the composition. A couple of leaves hang silently over the margin of the bowl. Next to it, there are three smaller red fruits. The designs on the wooden table seem to be decorative carvings. Through the close disposition of analogous colors, he renders a “muted” effect on his paintings. In fact, he is well known for experimenting a lot in his artworks with colors, textures, and techniques.

5. Still Life with Teapot and Fruit

One of Gauguin’s biggest inspirations was the French artist Paul Cézanne (1839–1906). So it’s no surprise that his most prized possession was a still life, Still Life with Fruit Dish, by none other than Cézanne.

In this still life, he tries to emulate his idol’s painting but not without changing a few details. He replaced the original apples in Cézanne’s still life with mangoes and a French floral wallpaper design for the Tahitian-style printed cloth. Paying close attention to the upper-right corner of the painting, the viewer will notice a human figure staring in another direction. Sadly, in the same year he finished this artwork, Gauguin had to sell his Cézanne due to his precarious financial situation.

A glimpse into the life of the Welsh daughter who ran away to Paris to paint. Let us follow Gwen John in Post-Impressionist Paris. Gwendoline Mary...