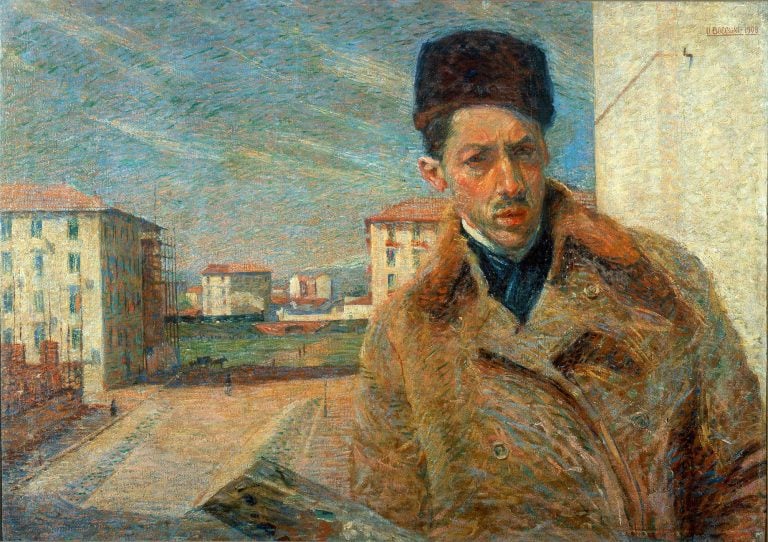 Everything You Must Know About the Manifesto of Futurism

Very few artists developed their styles early in their careers. Most of them searched for new means of expression their entire lives, often making unexpected turns and changes. One such artist was Umberto Boccioni, a leader of the Italian Futurists. They were a group of radicals who wanted to reconstruct the world. However, before Boccioni denied history and anything that had come before Futurists, his style drew from…

This self-portrait shows Boccioni as a student at the Academy in Rome. The brushwork is soft and the tone mild. The entire composition resembles many Impressionist portraits that Boccioni must have seen. He was very attached to this painting; he never sold it, although his style completely changed.

Divisionism was an Italian response to French Post-Impressionism. Divisionists, inspired by the scientific theories about complementary colors and the works of Georges Seurat and Paul Signac, created works shimmering with light. However, instead of small dots like the French painters, they applied thin and elongated lines of paint, the so-called ‘”filaments.” You can see them in the trees, sky, grass, and the orchard wall.

Look at the dramatic change of palette, which in this painting is much darker and charged with emotion. The colors are not verisimilar. Boccioni chose them to better express the atmosphere of the mystery of the night. The contorted buildings, which are so close to one another that it seems there is no way out, induce the feeling of doom or oppression.

Boccioni’s searches are heading towards the ultimate discovery or creation of Futurism which, contrary to Cubism, would not show geometric volumes over time but strive to depict how environment and time shape the forms. Here, however, we can see the influence of Georges Braque’s papier collé by looking at the pieces of newspaper and Pablo Picasso’s studies of human forms.