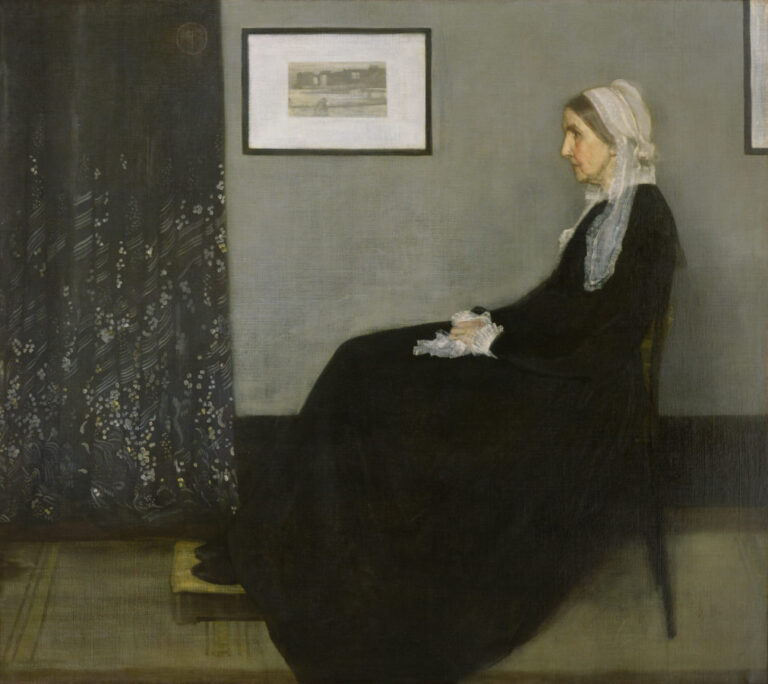 This is one of the most famous works by an American artist outside the United States. It has been variously described as an American icon and a Victorian Mona Lisa. Today we will talk about “The Artist’s Mother”, also known as “Arrangement in Grey and Black No. 1” by James McNeill Whistler.

Anna McNeill Whistler posed for the painting while living in London with her son at Cheyne Walk, Chelsea. Anna was a literate and well-travelled woman. In 1831 she married Major Whistler and until his death from cholera in 1849 they enjoyed an affluent lifestyle in Russia with their children. After her husband’s death, Anna wore black for the rest of her life.

There are couple of legends regarding this portrait. One is that Anna Whistler acted as a replacement for another model who couldn’t make the appointment. Another one says that Whistler originally envisioned painting the model standing up, but that his mother was too uncomfortable to pose standing for an extended period.

Whistler intended the painting to be a study in colour and form, and its subject matter and often minimal, even abstract, paint application worked to defy traditional expectations of narrative art. The artist used a variety of techniques: his mother’s darkly coloured dress is painted thinly, while his treatment of her hands and face (with areas of pink and yellow) is luminous, showing his care in building up colours to illuminate and animate his subject.

The work was shown at the 104th Exhibition of the Royal Academy of Art in London in 1872, after coming within a hair’s breadth of rejection by the Academy. Arrangement was the last painting he submitted for the Academy’s approval.

Whistler eventually pawned the painting, which was acquired in 1891 by Paris’ Musée du Luxembourg. The im

age has been used since the Victorian era, especially in the United States, as an icon for motherhood, affection for parents, and “family values” in general. For example, in 1934 the U.S. Post office issued a stamp engraved with a stylized image of Whistler’s Mother, accompanied by the slogan “In Memory and In Honor of the Mothers of America.”

The portrait has been the subject of many, often humorous, parodies in which the mother, or the object of her gaze, has been altered. This only testifies how important this painting is in the modern culture.