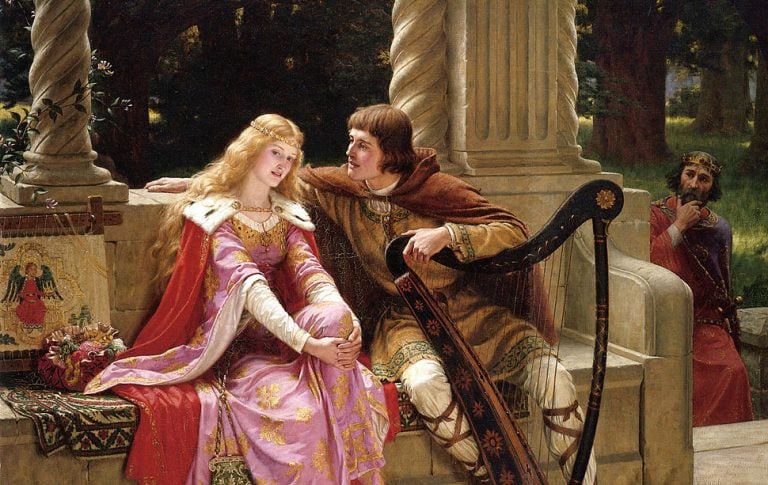 Mythical love stories are some of the greatest ever told, capturing the hearts of many generations. They have been recreated in sculpture, retold in literature, acted out in theaters and depicted on paintings.

One day, Ceyx was sailing back to Trachis to be reunited with his wife, who was waiting for him ashore. Zeus sent a thunderbolt down from the heavens, which capsized the boat, killing Ceyx. After realizing that her husband was not coming back to her, Alcyone prayed to Hera asking for her husband back. Taking pity on the heartbroken woman, Hera sent Ceyx’s body back to the shore. Stricken with grief, Alcyone drowned herself.

Showing mercy on the king and queen, Zeus turned them into kingfisher birds who come to lay eggs during halcyon days. Greek mythology associates these days with a time of happiness and contentment. Each year on the 14th of December the gods would calm the seas so that the kingfishers, or halcyons, could lay their eggs.

Both Welsh painter Richard Wilson and French painter Charles-André van Loo’s works show Ceyx’s dead body coming back to Alycone, who has been waiting on the shore of Trachis. Wilson’s work appeared at the Society of Artists in 1768 and received glowing reviews for its dramatic depiction of this scene.

The love story of Zal, the king of Sistan, and Rudabeh, daughter of the king of Karbol, is one of Persian mythology’s most well-known. The tale comes from the epic poem The Shahnameh, written by the Persian poet Ferdowsi between 977 and 1010 CE.

Zal told his father that he wanted to travel to meet the beautiful princess. Yet Zal’s father had some bad news – she was a descendant of the evil serpent King Zahhak, an enemy of the family. However, determined to meet her, Zal ignored his father and traveled to her castle.

After a long and treacherous journey, Zal arrived at the foot of the castle one night. Rudabeh saw Zal, and in an attempt to conceal his arrival from the guards, she let her hair down – like Rapunzel – for him to climb up.

As soon as they were together, they knew their love for each other was real. Subsequently, their families put aside their differences and allowed the pair to marry. Later, they had two children – one of these was the warrior Rostam, who became the main hero of The Shahnameh.

A series of miniature paintings captures the story of The Shahnameh. Although not confirmed, they are thought to be the work of Persian miniature artist (and one of the significant miniaturists of 17th century Safavid Iran) Mo’en Mosavver. The miniatures seen here capture the moment Rudabeh let down her hair for Zal to climb, one of the story’s most popular scenes.

Indian culture is teeming with mythical love stories. One such story, now popularly known as The Diwali Story, tells the tale of Prince Rama and Princess Sita. A series of miniature paintings illustrate the Diwali story. This collection is one of the largest collections of miniature paintings in India. Although the artists of these miniatures are unknown, the main schools for this particular style were Rajasthani (West India) around 1700–1900 CE, and Pahari (from the hills of the North) around 1600–1800 CE.

The myth says that Rama’s father, King Dasharatha, had promised one of his wives that she could have anything she wanted. She asked that her son, Ravana, be the next king instead of Rama. Dasharatha’s preferred choice was Rama, but in keeping his promise he agreed that the other son would be his successor. Yet, this was not all – the wife also insisted that Rama and his beloved wife Sita live in the forest for 14 years.

And so it was – Lakshamana, Rama’s brother, accompanied the couple to the forest and there they began living. After some time had passed, the evil King Ravana decided that he wanted to make Sita his wife. One day, he kidnapped Sita and took her to his island.

The broken-hearted Rama set out to find Sita and kill the evil King Ravana. With the help of the monkey King Hanuman, Rama found Sita and killed Ravana in battle. Finally, the couple decided to head back to their city, where Rama eventually became the next king. The people of their land lit oil lamps to help them find their way back home. Ever since, people light lamps at the ceremony of Diwali to remember their story – and that good always triumphs over evil.

The story of Tristan and Isolde is one of Ireland’s best-loved mythical love stories. Originally written in the 12th century, this love story has inspired Western art and literature for hundreds of years. Tristan, a Cornish knight, sailed to Ireland to bring the Irish Princess Isolde to his father, the king of Cornwall, to marry. Fortunately, he succeeded in finding the princess, but her beauty overwhelmed him and they fell in love.

The love struck pair decided to drink a potion to kill themselves, so that they would be together forever. Yet, they accidentally drank a love potion instead.

After drinking the potion, Tristan and Isolde fell even more deeply in love. This scene is depicted in Scottish painter John Duncan’s work. The artist moved to Edinburgh from Dundee where he joined Patrick Geddes in forming the Celtic Renascence cultural movement. He worked mostly on murals, with much of his subject matter based on the Celtic Revival.

When they arrived in Cornwall, Isolde married the king as promised. However, the two lovers stole moments to be together whenever they could. Unfortunately, the king’s men began to notice, as shown in Edmund Leighton’s painting.

As a result, the king sentenced them to death. Luckily, Tristan escaped and rescued Isolde. The lovers ran into a nearby forest, but the king found them later. He demanded that Isolde return to his castle to be with him. Heartbroken, Tristan was banished from Cornwall, never to return.

No list of mythical love stories is complete without including the Roman god of love, Cupid, and the object of his affection, Psyche. The original tale comes from Metamorphoses, written in the 2nd century CE by Lucius Apuleius Madaurensis. Cupid was the son of Venus, the Goddess of love, sex, beauty, and fertility. Venus became extremely jealous of Psyche, a mortal with incomparable beauty. In an act of jealous rage, Venus ordered Cupid to make Psyche fall in love with a monster.

As Cupid went down to Earth to carry out his mother’s wishes, he instead fell in love with Psyche. They began a secret relationship upon one condition: Psyche could never see what Cupid looked like, and so he only visited her in the dark of night. Goya captures the two lovers meeting at night in his famous painting, The Allegory of Love.

One day, Psyche broke the rule and glimpsed her lover. As a result of this betrayal, he left her. Devastated by her loss, she begged Venus for him back. Venus agreed to give her Cupid back – but only if she completed a series of arduous tasks.

Her final task was to take a box containing a dose of Proserpina’s beauty from the underworld. Thankfully, she succeeded, but couldn’t resist opening the box. Her punishment for this was to fall into a lifeless sleep. Cupid found her and revived her with a kiss, as shown in Antonio Canova’s exquisite marble sculpture. We can see the sculptor’s craftsmanship in the smoothness of the couple’s skin, as well as the detail attributed to their hair, clothes, and Cupid’s wings.

To put an end to their suffering, Cupid went to the gods and pleaded for them to be together. Consequently, the gods agreed and made Psyche immortal, so that they could stay together for eternity.

Swiss artist Jean-Pierre Saint-Ours depicts the moment both Cupid and Psyche reunite in his oil painting. He captures the lovers in a moment of ecstasy at the prospect of being together again after overcoming such obstacles. Finally, the love story ends with the pair marrying in heaven and later having a daughter named Voluptas, meaning pleasure.