The Diwali Festival Through Art 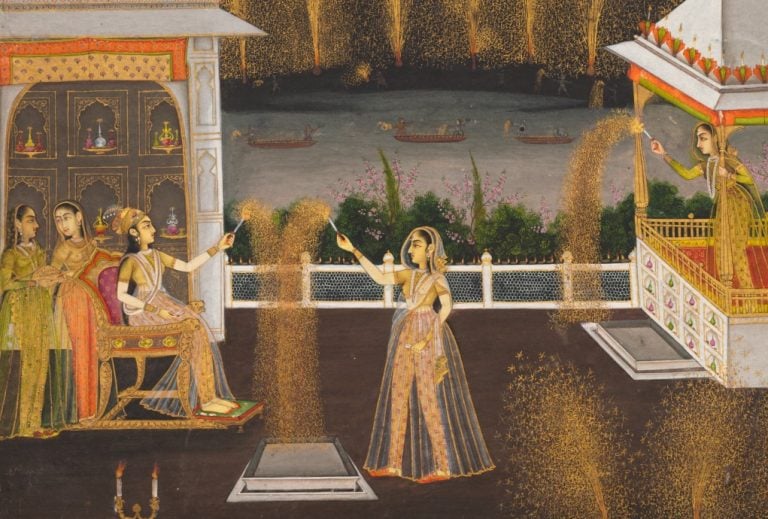 Diwali or Deepawali is an ancient festival and arguably the most important of all Hindu holidays. It is the third day of a five-day-long celebration that also includes the Hindu New Year. Diwali falls on the night of the full moon between mid-October and mid-November. While the story behind the celebration differs from region to region, the most commonly accepted is based on the Ramayana. Diwali commemorates Lord Rama’s return to his kingdom of Ayodhya after 14 years in exile.

Rama is the seventh avatar or incarnation of the Supreme God, Vishnu. His tale, the Ramayana, is one of the greatest works of South Asian literature. A voluminous poem of 24,000 verses, this narrative originated in the 5th century BCE. However, the story is believed to have existed in oral form long before it was reduced to writing by Sage Valmiki. The lively narrative has sparked the imagination of countless artists since antiquity and has resulted in works of sculpture, temple art, rock carvings, paintings, performance arts, etc. Given Rama’s divine status, representations of the Ramayana in visual arts are considered an act of devotion.

After being corrupted by a devious servant, Queen Ketaki tricked her husband, King Dashratha, into sending her stepson, Rama, into exile for 14 years. This would secure the throne in favor of her own son, Bharath. The virtuous Rama obeyed his father without hesitation and left for the Dandakaranya (forest of Dandaka) with his wife Sita (an avatar of Goddess Lakshmi) and brother Lakshman. Shortly after, with his beloved sons departed, King Dashratha died of a broken heart.

Upon learning of his mother’s devious plot, Bharath went to Rama and begged in vain for Rama’s return to take his rightful place as the King of Ayodhya. When he couldn’t sway his brother’s resolve, Bharath returned to Ayodhya with Rama’s sandals, placing them on the throne and signaling his intent to serve as the regent of Ayodhya until the return of its rightful ruler.

Having given up the comforts of the royal palace, Rama, Sita, and Lakshman led simple lives of ascetics in Dandakaranya. One fateful day, as the brothers hunted and Sita was left alone, Ravana, the ten-headed demon king of Lanka, abducted Sita.

Battle of Rama and Ravana

Much of the Ramayana describes Rama’s relentless search for his beloved wife and the many obstacles and distractions therein. Rama, Lakshman, and the powerful monkey-God Hanuman led Rama’s army to an epic battle against Ravana. The battle in Lanka was fierce but eventually, Rama’s army emerged victorious.

Soon after rescuing Sita, 14 years of exile had passed, and Rama returned to Ayodhya. The subjects of Ayodhya celebrated the victory of their virtuous king over Ravana’s evil forces by lighting diyas, or oil lamps, in their homes. The lights symbolized the triumph of light over darkness or good over evil and guided the path of their beloved king and his entourage back home. Thus, the homecoming of Rama is commemorated every year with diyas and fireworks.

Lakshmi is the Hindu Goddess of wealth and an avatar of Sita. It is believed that on the day of Diwali, Lakshmi was incarnated from the depths of the ocean and subsequently married to Lord Vishnu. Hindus believe that Lakshmi roams the earth on the night of Diwali and is drawn to illuminated homes. To welcome Lakshmi is to welcome wealth and prosperity; the lighting of diyas and Lakshmi pooja, or the worship of Lakshmi is an important Diwali ritual.

Diwali is celebrated in India and many other countries by nearly a billion people, with rituals varying considerably with regions and local traditions. Much like Christmas in the West, Diwali is a time for merriment with family and loved ones. Homes are decorated with diyas and rangoli (floor patterns with colored powders), gifts are exchanged, and fireworks mark the joyful occasion.