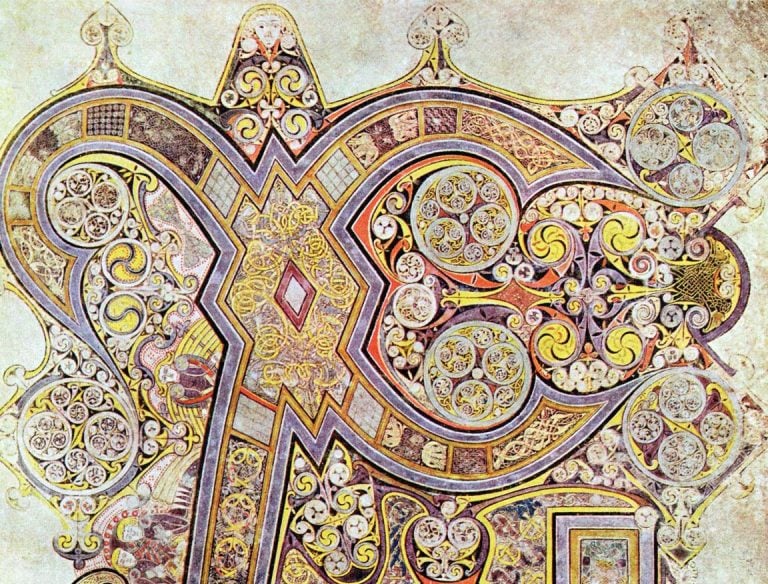 The Irish metalworking tradition is second to none! Medieval Irish art was full of exquisite metalwork, and the most gorgeous is on the Tara Brooch. U-shaped (penannular) and ring-shaped (pseudopenannular) brooches were very common in ancient and medieval Irish culture, but this particular brooch is no mere functional object. It’s only 3,5 inches across (8,89 cm), but it’s covered in tiny filigree (fine metal wire) arranged into intricate patterns called interlace.

Medieval Irish art was full of interlace, and you’ll see it throughout this article – made of wire, cast in metal, carved in stone, and painted on manuscripts. The Tara Brooch has tiny animal heads biting the interlace, and that’s another common feature of medieval Irish art. The brooch also includes metalwork techniques called granulation and chip carving, and it’s adorned with amber and colored glass. It’s decorated on both sides, even though only the owner would ever see the back.

It must have taken an incredible amount of time and skill to make the Tara Brooch, but that’s equally true of all the other masterpieces in this article. Several other elaborate medieval brooches have been found in Ireland, but this is by far the most spectacular.

The Celts are the ethnic group to which the Irish belong, and these motifs were first found in the art of the La Tène culture, an ancient Celtic group in what’s now Switzerland. Unlike the Tara Brooch, however, the Ardagh Chalice has more blank space in the form of its silver base and bowl. On the underside, there’s a piece of rock crystal and some more intricate metalwork.

The chalice was used for Eucharistic wine in church, and the decorations underneath would be visible when someone tipped the chalice to take a drink. A bunch of other Irish liturgical vessels with spectacular metalwork were found as part of the Derrynaflan hoard, including another chalice and a paten.

The Book of Kells

The Book of Kells is the true pinnacle of medieval Irish art, and it’s more elaborately decorated than any other manuscript on earth. Alongside the text of the four Christian Gospels, The Book of Kells contains pages and pages of mind-blowing decoration. The most striking ones are those in which letters, interlace, spirals, rich colors, and human or animal figures all combine together.

For example, the page shown above spells out the words “In principio erat verbum” (Latin for “In the beginning was the word”) from the Gospel of John. But, the first few letters have been so heavily embellished that they look like some kind of abstract textile pattern. In fact, pages like this are sometimes called “carpet pages” for that very reason. There’s no blank space at all. Every millimeter is taken up with interlace and other forms, many of which have strong Christian symbolism. You can stare at a single page for hours and still keep finding new details to marvel over.

The Book of Kells is Ireland’s national treasure, so it’s a bit ironic that it wasn’t actually made in Ireland. In medieval Ireland, like the rest of the European world, monks were the people who copied and decorated manuscripts. The Book of Kells was most likely created by a group of Irish monks living at a monastery on the Isle of Iona in Scotland. Eventually, Viking raids forced these monks to flee back to Ireland and settle at Kells. They brought The Book of Kells with them and may have even finished it there. The manuscript styles being used by monks in Ireland, Scotland, and England at this time were so similar that scholars can’t tell for certain where a particular manuscript was made. The Book of Kells and similar manuscripts like the Lindisfarne Gospels and the Book of Durrow are usually called “insular”, which just means that they were created somewhere on the British Isles.

Massive stone High Crosses were common in medieval Irish art, as they adorned most Irish monastic sites. Muiredach’s High Cross, located in Monasterboice, Co. Louth, is generally considered to be the best of the bunch. It stands 18 feet tall! Earlier High Crosses were mainly decorated with interlace motifs, but 9th and 10th century crosses like this one have a lot of figurative decoration, too.

Muiredach’s cross shows the Crucifixion and Last Judgement in the center of the cross, with other Biblical scenes up and down the shaft. But there are still panels of beautiful interlace on the sides, wheel, and top. The wheel shape connecting the cross’s four arms is common in High Crosses, which can also be found at Iona, Kells, Clonmacnois, Ahenny, and Banagher. High Crosses still dot the Irish landscape today, but many have eroded considerably due to centuries of weather.

The Cross of Cong

The Cross of Cong was a reliquary – an elaborate shrine made to house a fragment of the True Cross. Turlough O’Conor, the High King of Ireland, acquired such a fragment from the Pope in 1122 and had this cross made to house it. The fragment would have rested inside the rock crystal orb in the center.

The Cross of Cong is decorated with – you guessed it – lots of interlace. It’s very elegant and harmonious, and all the decorated areas are beautifully proportioned. You can see that Irish metalwork had grown even more sophisticated in the centuries that had passed since the Tara Brooch and Ardagh Chalice. It has also adopted up some aspects of Viking art during the Viking invasions. One example would be the Scandinavian-style animal forms in the interlace.

This cross was used both as a processional cross – one that was carried in religious parades – and as an altar cross. A large bird head bites the cross at the point where it meets the handle, and this is very similar to the biting animal head on the Tara Brooch. The fragment of the True Cross is long gone, but you can still see the Cross of Cong at the National Museum of Ireland.