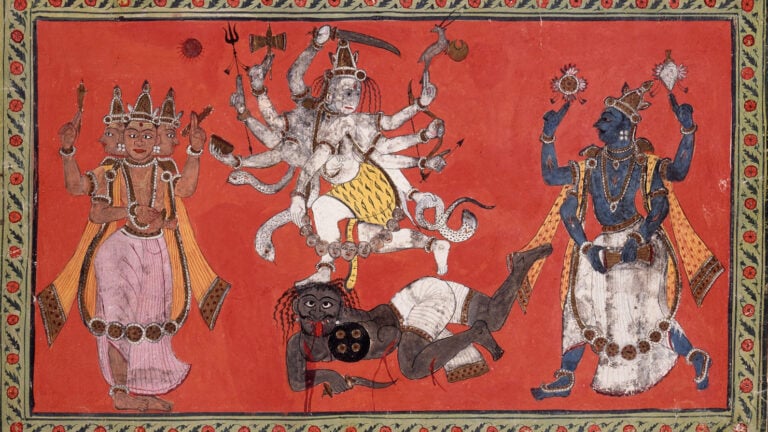 The Hindu trinity comprises Brahma, the creator; Vishnu, the preserver, and Shiva (or Mahesh), the destroyer. These three Gods represent the cyclical nature of our existence from birth, preservation, and destruction to subsequent regeneration. These Gods are identifiable in their artistic representations by the icons commonly associated with them.

Gods of the Vedic Period

Hinduism is broadly divided into the Puranic Period and the more recent, Vedic period. The Puranic period entailed worship of the Gods of the elements of nature, such as Surya, the Sun God; Indra, the God of rain and thunder; Chandra, the moon God, etc. Worship was generally in form of yagnas or elaborate rituals conducted by the priest caste known as the Brahmins. The three Gods of the Hindu trinity ascended into prominence during the Vedic period, at the same time that idol worship in temples was popularized. Consequently, the representations of the Puranic Gods (or the old Gods) are rare, while the Vedic Gods are heavily represented in architectural reliefs, sculptures, as well as paintings.

Vishnu is the preserver and protector of the Hindu pantheon who descends to the earthly plane of existence whenever it is threatened by chaos or evil. Popular avatars of Vishnu include Rama and Krishna. Vishnu is portrayed with blue or grey-blue skin and is dressed in the finest clothes and jewels. As is common with Hindu Gods, he is frequently accompanied by his animal companion and vahana (vehicle), Garuda, who is part man and part eagle. Other icons associated with Vishnu include the conch shell, a war discus, a mace, and lotus flowers.

A popular representation of Vishnu shows him reclining on Sheshnag, the five-headed king of snakes, as he drifts through the primordial ocean that was in existence before the creation of the universe. He may be portrayed alone or with his consort Lakshmi (the goddess of wealth). In some sculptures, he is portrayed with two consorts; Shree Devi (another name for Lakshmi) and Bhu Devi (the Earth goddess and an avatar of Lakshmi).

The blue-skinned Shiva is the destroyer of the Hindu trinity. In contrast to Vishnu, Shiva is described as a hermit or ascetic being dressed in animal skins with matted and dreadlocked hair. His common identifying features in artworks include his third eye, a damaru (drum), a Trishul (trident), the serpent around his neck, and the crescent moon with the holy river Ganga flowing through his hair.

In some representations, he is portrayed with his consort Parvati and sometimes with their children, Skanda, and Ganesh (the famous elephant-headed God). He may be shown immersed in deep meditation or in the popular Nataraja form where he dances the Tandava or dance of destruction paving the way for regeneration. Another popular form of Shiva is the phallic Shiva linga sculpture which symbolizes his powerful regenerative energy. His vahana (animal) is Nandi, the bull, often depicted laying loyally at his feet and Shiva is often depicted with one foot on Apasmara, the immortal demon who represents ignorance.

Brahma, the creator is usually depicted as an old man with four heads facing in each direction. It is believed that each of the four heads recited one of the four Vedas of Hinduism. Unlike the other two gods in the triumvirate, Brahma is not portrayed with any weapons of war but instead holds symbols of knowledge, wisdom, and creation. His icons include tools to perform yagnas or religious rites such as a water pot, a spoon to pour ghee into ritual fires, Vedic texts, and a rosary. His vahana is a goose or swan. While Indian artworks show him dressed as a priest or in royal finery, Indonesian sculptures depict him as an ascetic similar to Shiva. Brahma’s consort is usually Saraswati, the goddess of knowledge. According to some scriptures, his consorts are Gayatri and Savatri. Some claim that they are avatars of Saraswati and thus the same being, while others claim each are distinct deity.

Unlike Shiva or Vishnu, the worship of Brahma is not as widespread. Though Brahma frequently appears in scriptures and texts, there are a few places of worship that are dedicated solely to his worship. Many tales exist to explain this notable absence. A popular legend propagated by the Shaiva tradition holds that the absence is a result of a curse from Shiva.

It is believed that Brahma and Vishnu would frequently argue about who among them was the more powerful being. To avoid the brewing war, Shiva changed form into the agni-stambh (fiery pillar) that had no beginning and no end in sight. It was decided that whoever found the end of the pillar first would be the more powerful God of the two. Vishnu turned into a boar and probed through the depths of the Underworld, while Brahma turned into a swan and searched through the skies. After thousands of years of searching in vain, Vishnu returned accepting defeat. Though Brahma’s search had also proven fruitless, he conspired with the flower Ketaki to claim that had found the very top. Angered by Brahma’s treachery, Shiva condemned Brahma to never be worshipped.

Hinduism is the oldest surviving religion, with oral traditions and customs dating back more than 4000 years. The natural evolution of a religion over this long period of time resulted in diverse and often contradictory customs and literature. Consequently, the artistic iconography may sometimes overlap and could often be conflicting. Despite the countless legends and many Hindu Gods and goddesses, these three Gods of the triumvirate hold a place of immense importance in the present form of Hinduism.