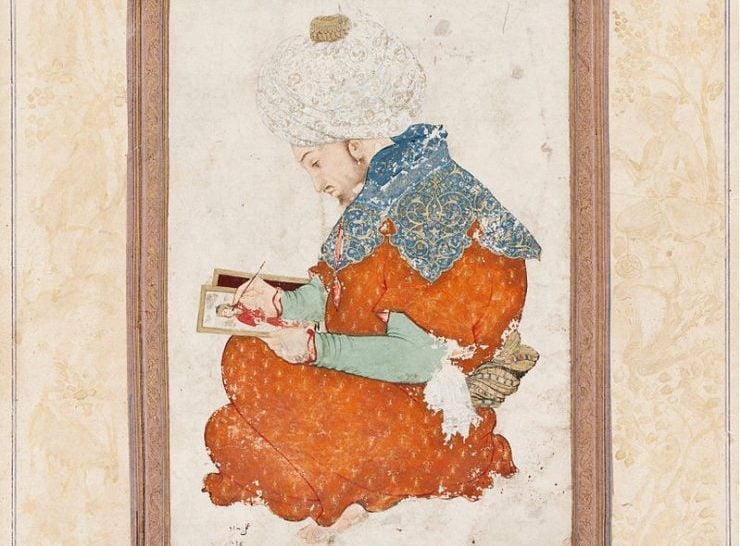 Bihzad’s name has become synonymous with the high level of artistic skill displayed by the painters under the reign of Timurids and, later, the dynasty of Safavids in today’s Afghanistan and Iran, as he led an entire workshop (or kitabkhana) producing manuscript illuminations. Moreover, he came up with a new style which uses geometry and architectural elements as the structural or compositional context in which the figures are arranged. If you ever read a book which contained illustrations with “architectural“‘ or “optical” illusions, you’ll soon see many similarities.

The figures, designed as idealized types or stock characters which repeat across the manuscript and feature in different stories, are meant to convey a sense of mood and person­ality more subtle and expressive than in customary Persian manuscripts. However, the precision of drawing and control in execution is superb and was the hallmark of 15th-century painting in Herat, Afganistan. The precision in the pattern, calligraphy, and design is Bihzad’s most important legacy, yet the subsequent generations broke with it, painting figures which were rigid and lifeless.

Sadly, not many of Bihzad’s signed works have survived, making the personal attribution of other works a matter of conjecture. Despite the fact that many manuscript illustrations and single paintings have been ascribed to his hand, only a few of these are officially certified as his work. In addition, Bihzad’s signatures are often either incorporated into architectural inscriptions or placed inconspicuously on an object in the painting as we see above, making them hard to spot.