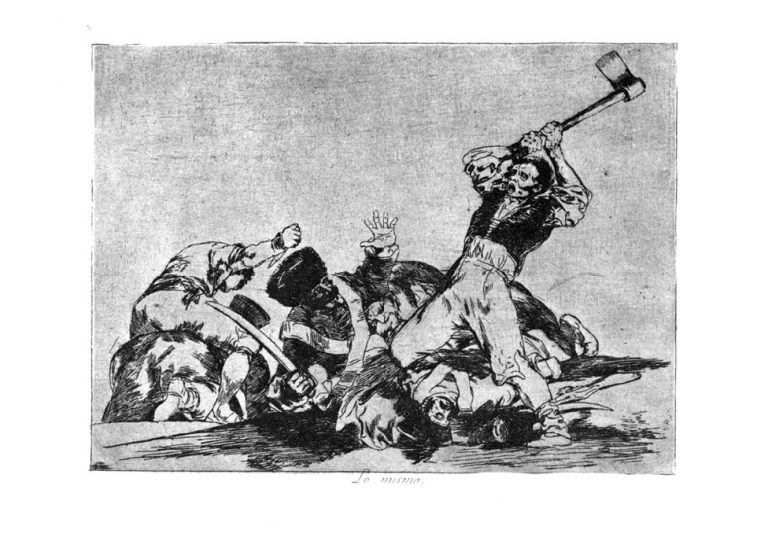 Francisco Goya, The Same, plate 3 from The Disasters of War, 1810s. WikiArt.

Francisco Goya (1746-1828) is considered to be the founder of the national genre in Spain. He was talented in many areas: portraits, historical scenes, and more. But he is also known as the voice of dissatisfied people. He always truthfully captured what happened in his dearly beloved Spain. Goya’s The Disasters of War print series is a perfect example.

A farmer’s son, from the age of thirteen Francisco Goya studied for six years in Jose Luzan’s workshop in Zaragoza. He fled from there after participating in a fight during a religious procession. His next stop was Madrid, however he found no peace there either. So, after another fight Goya fled to Italy.

He did not stay in Rome either, though. Goya took part in a scandalous affair with a girl whom he was going to take away from a monastery. (She did not inspire any known paintings but you can read about the muse of his life, Duchess Alba, here.) The artist had to return to Madrid.

During these scandals Goya did not forget to paint. In Rome, he received the Academy of Parma Prize for Hannibal Crossing the Alps (1771). In Madrid, a huge number of orders for portraits awaited the artist.

In 1788, Goya became a court painter for Charles IV. He painted for many notable people and had the King’s protection. However the Inquisition was always breathing down his neck. In 1799, Goya released an album of engravings called Caprichos, which by the standards of the time could be called “underground”. Caprichos is a story about how ideology and superstition can kill a living thought, about the fact that the country is suffocating.

The Face of Cruel Progress

At the end of the 18th century, a glimmer of progress for the people came from France. It was there that the Revolution took place, from there that forbidden brochures came. The people of Spain and Goya, as their herald, dreamed of French freedom.

However, when Napoleonic troops entered Madrid to make Spain a part of Bonaparte’s empire, Goya saw that the conquerors of France had the same face as the Spanish monarchs so disliked by the artist. Goya’s shock of seeing the realities of the Peninsular War resulted in his creation of The Disasters of War in the years 1810-1820.

The title The Disasters of War is not Goya’s. The artist himself called this series Fatal Consequences of Spain’s Bloody War with Bonaparte, and Other Emphatic Caprices. Goya did, however, give the name to each individual print’s caption. They contain sentences full of pain: They Do Not Want To, And It Can’t Be Helped, One Cannot Look At This.

In Disasters of War Goya showed how progressive soldiers quartered and hung innocent civilians, how in the name of progress they raped women and trampled freedom in the mud. He painted the faces of the French generals and the bodies of the shot insurgents. There is no color in the series – only the grim and cruel directness of black and white.

The Disasters of War sheet by sheet tells a story of the people’s humiliation. There are 82 prints, which can be divided into three parts. Firstly, 47 plates contain the despicable actions of soldiers. Secondly, there are 16 plates focused on 1811-12 wave of famine. The final plates capture the people’s disappointment in post-war Spanish repressive politics. No liberal’s (such as Goya’s) dreams ever came true.

The Disasters of War captures the rape, murder, hunger, torture, and executions of both prisoners of war and civilians. War is depicted through the eyes of the victims as unjustified cruelty, and not as military campaigns or scenes of heroic victories. Above all, Goya is honest with himself and with people: he highlights the endless drama of the war.

The Disasters of War were first published 35 years after the Goya’s death. Only then did it become possible to publish works criticizing both French and Spanish monarchs.