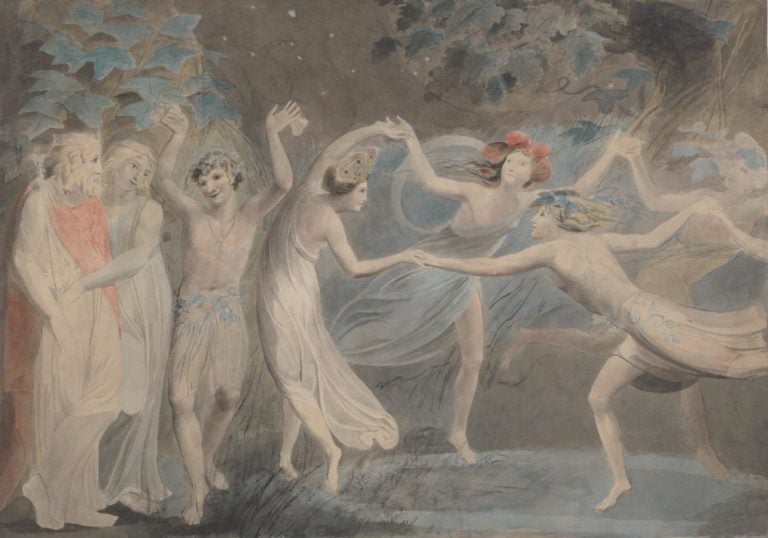 How Well Do You Know Shakespeare? Check Your Knowledge [Quiz]

Regardless of the time of the year, Shakespeare’s A Midsummer Night’s Dream is one of the first things that come to mind when the word “Midsummer” is mentioned. This play is a little complicated. There are many subplots, confusing or frustrating situations, and lots of people taking naps. Let’s see how artists throughout time have been inspired by Shakespeare’s masterpiece. Consider this your own visual guide to A Midsummer Night’s Dream. Spoiler alert!

A Midsummer Night’s Dream is William Shakespeare’s 5th comedy and 12th play, according to E. K. Chambers’ chronology. Shakespeare wrote it between 1595-1596, while he was also working on Richard II and Romeo and Juliet. Curiously, the play may have actually been set during the month of May!

Midsummer is the period centered around the summer solstice, the longest day of the year. It usually falls between June 19th and 25th, depending on the culture, but there is evidence that Midsummer celebrations have occurred since the Stone Age.

As inspirations for the play, there are a few particular stories that may have influenced Shakespeare’s creation: Edmund Spenser’s Epythalamion, Ovid’s Metamorphoses, Chaucer’s A Knight’s Tale, Greek legends about Theseus and Hippolyta, and even the German poem The Buzzard (Der Busant).

It is not clear when the play was first performed. Some scholars think it was written to commemorate an aristocratic wedding, while others think it may have been for Queen Elizabeth to celebrate the feast of St. John. But, we know it was first printed in 1600 by Thomas Fisher in quarto format. A quarto contains one hundred pages and is generally about 6 3/4 x 8 1/2 in (ca. 17 x 22 cm) size. A Midsummer Night’s Dream would have first been performed at the theatre, but we know for certain that the first performance at the Globe Theatre was on 1st January, 1605.

What is A Midsummer Night’s Dream about?

There is a lot happening in this play, but Shakespeare’s deft weaving of all the threads produces a variety of hilarious situations. The themes of identity, love, and its loss, sexual identity, feminism, and authority are all examined in A Midsummer Night’s Dream, making it particularly pertinent for our times.

The action of A Midsummer Night’s Dream occurs in five acts, and centers on various storylines that revolve around the wedding of Theseus, Duke of Athens, and Hippolyta, Queen of the Amazons. First is the double love triangle between two couples: Hermia and Lysander, and Helena and Demetrius. Second, we have Egeus, Hermia’s father, who appeals to Theseus so that he will force Hermia to marry Demetrius. Third, we have the quarrel between Oberon and Titania, King and Queen of the Fairies. Fourth, we have a troupe of tradesmen trying to put together a play as entertainment for the wedding.

Act I Scene I

Ay me! For aught that I could ever read, Could ever hear by tale or history, The course of true love never did run smooth.

The play opens in Athens, where Theseus is planning the celebration of his marriage to Hippolyta. He had previously won Hippolyta’s hand by defeating her in combat. Enter Egeus, an Athenian, demanding that Theseus enforce the law upon his daughter, Hermia, by making her marry Demetrius. By law, Hermia should obey her father and, should she fail, her choices are to enter a nunnery, or be executed.

But, Hermia does not love Demetrius. She is in love with Lysander instead. Refusing to obey her father’s command, they decide to elope, and they reveal their plot to Hermia’s good friend, Helena.

Meanwhile, Helena is herself in love with Demetrius. Thinking this a good opportunity to get Demetrius to turn back to her (he had wooed her before falling in love with Hermia), she reveals the elopement. But, instead of achieving her end, Demetrius runs into the woods after the pair, and Helena has no choice but to follow after him.

We will meet, and there we may rehearse most obscenely and courageously. Take pains. Be perfit.

Six Athenian tradesmen agree to put together a play as entertainment for Theseus and Hippolyta’s wedding. The play is a reenactment of the story of Pyramus and Thisbe, with Pyramus played by Nick Bottom, and Thisbe played by Francis Flute. The men settle upon meeting in the woods for rehearsal.

. . . And this same progeny of evils comes from our debate, from our dissension; We are their parents and original.

Do you amend it, then. It lies in you.

Oberon and Titania, King and Queen of the Fairies, quarrel over possession of a young boy, the son of one of Titania’s friends, who has become an orphan. Oberon claims that he wants the boy to be his attendant, but he is actually jealous of all the time and attention Titania is bestowing on the boy. So, Oberon orders Robin Goodfellow, “Puck,” to obtain a special flower that makes people fall in love with the next creature they see. He wants to make Titania fall in love with a beast so he can use her distraction to take the boy from her.

Meanwhile, Demetrius enters the woods followed by Helena, who is still trying to get him to pay attention to her. Oberon overhears, sympathizes with Helena’s love, and orders Robin to find the Athenian and drop some of the magic nectar into his eyes.

Not Hermia, but Helena I love. Who will not change a raven for a dove? The will of man is by his reason swayed, And reason says you are the worthier maid.

Oberon anoints Titania’s eyes as she sleeps, putting into motion the first part of his plan.

Lysander and Hermia have also fallen asleep nearby. Thinking that Lysander is the Athenian Oberon asked him to find, Puck anoints his eyes with the love nectar. Demetrius and Helena also arrive and, after an argument, Demetrius storms off, leaving her behind. When Lysander wakes up, the first person he sees is Helena, and he falls desperately in love with her. Helena, thinking that Lysander is making fun of her, tries to elude him, but he follows after her.

Later, waking up from a nightmare, Hermia realizes that Lysander is gone and begins to search for him.

O Bottom, thou art changed! What do I see on thee?
What do you see? You see an ass-head of your own, do you?

Robin wanders into the tradesmen rehearsing the play and, as a prank, he transforms Bottom’s head into the head of an ass. Bottom himself does not know what has happened and, thinking that his friends are trying to frighten him, he begins to sing to show nothing can scare him. The noise awakens Titania who, under the influence of the nectar, falls in love with him.

Jack shall have Jill;
Naught shall go ill;
The man shall have his mare again, and all shall be well.

Robin Goodfellow reports his doings to Oberon, who is quite pleased until Demetrius enters, wooing Hermia. Robin has poured the nectar onto the wrong man’s eyes! Hermia is desperate to find Lysander, so she storms away leaving Demetrius. Demetrius realizes that nothing can be done to change Hermia’s mind just then, so he settles for a quick nap. This is Oberon’s perfect chance to fix the mess he’s caused, so he sends Robin to fetch Helena, while he applies some nectar onto Demetrius’ eyes. Demetrius wakes up and sees…

Yes, he sees Helena—the new love of his life. At this point, the love triangle has shifted with Helena at the head, while Demetrius and Lysander are ready to duel for her love.

The girls are ready to fight it out, too. Hermia is furious that Helena has stolen away Lysander’s love, while Helena believes that they are all in cahoots to make fun of her.

Oberon has created a lot of trouble for these four… So he commands Robin to impersonate each of the men in turn, distracting them and luring them away from each other. The men get tired of fighting and fall asleep—once more. The two girls, also tired and with nowhere to go, fall asleep as well.

Finally, Robin can apply nectar onto Lysander’s eyes to undo the spell that has drawn him away from Hermia.

Come, my lord, and in our flight
Tell me how it came this night
That I sleeping here was found
With these mortals on the ground.

The action switches back to Titania, who continues to pamper and fawn over Bottom until he, finally, falls asleep with her. Oberon, having now secured the boy for himself, tells Robin that it is time to undo the spells cast upon both Titania and Bottom.

Titania and Oberon reconcile, make music, dance, and sing. Bottom and the four lovers wake from a deep sleep before leaving the woods.

Later that day, Theseus, Hippolyta, and Egeus have all come to the woods to celebrate May Day (no matter that the play is called A Midsummer Night’s Dream) and discover the four lovers. Egeus realizes that his daughter has eloped, and asks Theseus to punish her. Everyone is surprised to hear Demetrius renounce his claim on Hermia because of his love for Helena, and Theseus very gladly overrules Egeus. He even goes so far as to suggest that all three weddings should be celebrated at once.

Bottom is left to ponder the strange dream he has had…

Masters, I am to discourse wonders. But ask
me not what; for, if I tell you, I am not true
Athenian. I will tell you everything right as it fell out.

The tradesmen are still regretting the loss of Bottom because now they cannot perform the play. Just then, Bottom appears, announcing that Theseus has chosen their play for the day’s entertainment. The show is still on!

Theseus dismisses the couples’ accounts as merely imagination, and they all settle down to watch the play. The performance is so ridiculous that all the couples are very entertained mocking the actors.

When it is finally time for all the couples to retire, Oberon and Titania enter once more to bless the three marriages. Robin Goodfellow, the trickster who was tricked, has the final word.

No more yielding but a dream,
Gentles, do not reprehend.
If you pardon, we will mend.
And, as I am an honest Puck,
If we have unearnèd luck
Now to ’scape the serpent’s tongue,
We will make amends ere long.
Else the Puck a liar call.
So good night unto you all.
Give me your hands, if we be friends,
And Robin shall restore amends.