The Art of Law: Legal Drama in Artworks 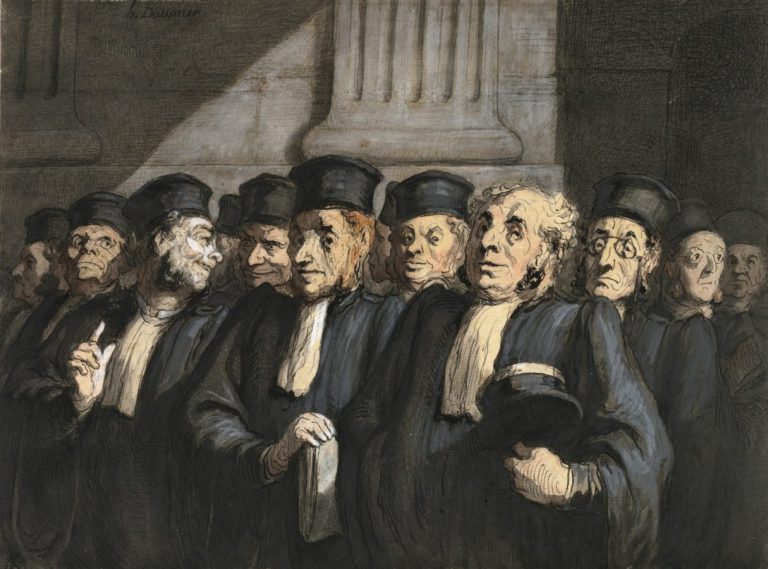 Courtrooms are associated with a wide range of emotions, from hope to anguish, tension to the mundane. While legal drama has tremendous representation on television, it is not as prevalent a theme in traditional artworks, despite the infinite scope for artistic interpretation.

The Agony of the Legal Process

A set of paintings titled Waiting for the Verdict and Not Guilty by Abraham Solomon are a rare and fascinating depiction of the effect of the legal process. These two paintings are on display at the J Paul Getty Museum in Los Angeles.

In the former painting, Solomon has depicted the palpable anxiety of a defendant’s family at the end of the trial. The setting is a rather bleak waiting room with rich wooden paneling and the painting is centered around an old father in insurmountable anguish, surrounded by his distraught family and young grandchildren. It is therefore clear that this has been a difficult time in their lives. A dog watches the old man expectantly as if attempting to console him. There is also visible anger in the eyes of the young wife. The other young woman gazes at the courtroom in the background in anticipation. The open door and the lawyers in conversation at the far end of the hallway indicate the reason behind the state of suspended animation.

In Not Guilty there is the depiction of overwhelming relief upon the evident exoneration of the defendant. Solomon expertly captured the gratitude and the relief in the eyes of the recently acquitted man. He holds on to his wife while his mother and his young child fawn over him. One cannot help but feel great relief for this family and the sweet dog, who, like most dogs, is making sure he is included. The father in the background is pictured offering heartfelt gratitude to his son’s lawyer. The bright lights of the outdoors hint at the new chapter ahead, not just for the man but also for his family. The waiting people in the lobby are an indication of another cycle of wait and hope of people whose fate has been entrusted to the legal process.

The Distrust of Lawyers

Honoré Daumier was a French painter and caricaturist whose work served as a social and political commentary. As a young man, Daumier took a job as a messenger for the law courts in Paris. This exposed him to the complexities and inequities of the legal system and instilled his deep distrust of the law and particularly of the gatekeepers of the legal system. One glance at these works will confirm that the portrayal was not complimentary.

For example, many of these works depict the lawyers as co-conspirators and perhaps elitists with little-to-no regard for the lives that they impact. Meanwhile, other depictions show the lawyers at work making impassioned pleas on behalf of their clients.

The Art of Courtroom Illustrations

The art of courtroom illustration dates as far back as the 19th century. News outlets and television networks commissioned artists to capture legal proceedings in an era when judges did not permit cameras in the courtroom to avoid distractions or preserve the privacy of litigants.

Some courtrooms allowed artists to create their sketches as they perceived them, while other artists would rely on working from their memory. Talented artists skillfully rendered intense moments of legal drama as well as mundane events of life in courtrooms within minutes!

Although camera usage has been permitted in state and federal courts since 1977 and the role of the courtroom sketch artist has undoubtedly diminished, the practice endures today and the Library of Congress website preserves works from notable trials.