Free as a Bird – Max Ernst, Lop Lop and the Art of Chance 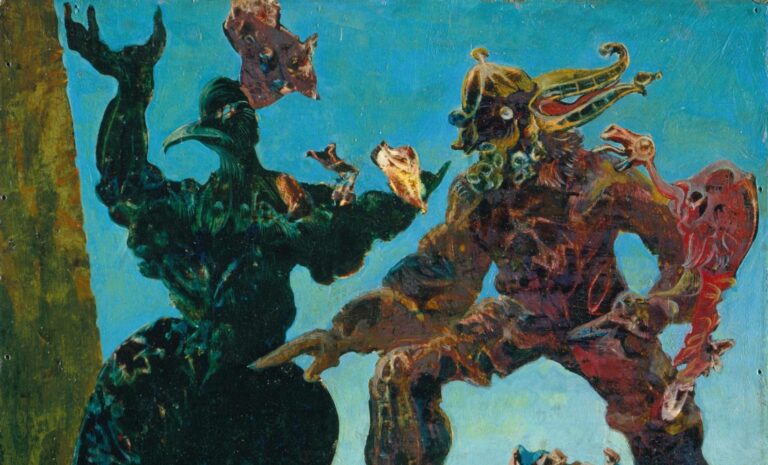 The unconscious mind can serve as a revealing personal landscape. Feeding our dreams, shaping our personalities and informing our behaviour; the hidden aspects of the self ultimately determine the waking other.

Surrealism was the moment when the mind was unleashed. Art became a vehicle to explore the irrational language of the subdued soul. Driven by the explosive irreverence of the Dada movement along with Freud and psychoanalysis, the Surrealists went one step further. Their aim was to transcend the everyday, to capture the fleeting sigh of the sublime and order it existent. Surrealism discovered beauty in chance occurrences. Its proponents delivered a new poetry through strange combinations of unrelated objects. An art that conjured the dream state into being through the magic of the uncanny.

Born near Cologne in 1891, Max Ernst studied philosophy and psychology during his early academic life at the University of Bonn. A revelatory encounter with paintings produced by patients at a neighbouring mental hospital enabled him to form a timely affiliation with questions of existence and emerging ideas regarding the human mind.

Against the wishes of his strict Catholic father (also a painter); Max followed his wider ambition to become an artist. He proceeded to investigate the environs of the unconscious mind in a number of ways. Aligning himself with the Dada group in Cologne and later, the emerging Surrealists in Paris, he enabled his visions to manifest as totems of his fractured self. Through diverse techniques and a range of art forms, his pursuit of chance produced irregular encounters and a strange, beguiling aesthetic.

Producing an instinctive, almost primitive chronicle of the world around him, we can perhaps define Ernst as a modern shaman, steeped in ritual and mysticism. A defining encounter in his childhood served to guide this creative practice. Suffering with a high fever, he imagined strange creatures emerging from the patterns in the wooden panel at the foot of his bed, informing his later experiments with frottage. Summoning hallucinatory visions from wood rubbings or other uneven surfaces, frottage was the link between his illusory dreams and the artistic ceremony that allowed them to manifest.

Chief among these imaginary figures were birdlike hybrids with human bodies or hands. Birds were to occur frequently in Ernst’s work. Although they are common symbols of freedom and liberation, Ernst allowed them to express supernatural qualities. None more so than his metaphysical alter-ego, Lop Lop; a feathery companion deemed ‘King of the Birds’. With suggestions of childish wit, Lop Lop serves as an interloper between the realms of the unconscious and the awakening mind. He first appears in a series of painted collages in the late 1920’s ‘presenting’ framed pictures to the viewer like an obsessive collector of found objects. He embodies the specter of Ernst as an artist, a gatekeeper straddling realities, a primitive icon bearing the secrets to visionary freedom.

But darker origins lay in the awakening of Lop Lop. Ernst traced the mutating of bird and human forms to another episode from infancy where his beloved pet parrot had died at the very moment of his sister’s birth. Both became interchangeable in his mind and Lop Lop was assigned the epitome of this dark abstract being. With this in mind, Lop Lop operates as a fanciful creature born through death, a spiritual emblem, a guide through the ghostly strata of Ernst’s inner mind.

Preceding the introduction of Lop Lop, an early work from 1924, ‘Two Children Are Threatened by a Nightingale’, channels an anxious, dreamlike episode. We are witness to ghostly painted figures in a sparse landscape dominated by a vast skyline and a tiny, almost imperceptible bird. The silent, trance-like quality of the composition hints at a hazy surrender to nightmarish symbols. The tiny bird becomes an imposing token of irrational fear, prompting a fainting fit in one of the children and a defending act of aggression in the other. With collage-like effect, a little wooden gate swings outwards from the painted scene, transcending the frame along with other constructed objects.

This use of physical articles in an otherwise painted piece instils a conflict within the viewer. Rather like the device of Lop Lop presenting his framed works, it’s almost as if Ernst is inviting us to leave the objective world behind and enter into this higher reality. The fleeing adult figure reaching for the doorbell could serve to represent the conscious mind sounding the alarm to awaken. Will we enter the gate or sound the siren? We stand at the precipice of two spheres.

In true Surrealist fashion, Ernst revealed that his art was aimed at poets, magicians and the illiterate. He serves as the perfect guide into the depths of Surrealist expression. His art informs its duality, its meaning and effect. In his own words, the creative explorations of Max Ernst go ‘beyond painting’.